RUSH: Let’s talk about Barack Obama. Here we go again. This time the story is in the Chicago Tribune. I have lost count now how many stories there have been in the liberal Drive-By Media oriented around the subject: ‘Is Obama black enough?’ This one tackles the subject from a different direction: ‘Is he too black?’ I can’t help but laugh. These people who think they’re conducting a serious investigation of the effect, impact of Barack Obama and the problems he’s going to have? If the people in this country, I just want to talk to you in the Drive-By Media — I know some of you listen. You’ll never admit it, but I know you’re out there. The people in this audience, for example, when it comes time to assess whoever it is that runs for president, when they look at Obama, they are first going to examine what the guy says he’s going to do. Intelligent, informed, involved people in this country, people who are engaged, care more about what somebody’s going to do, what their policies are, what they claim they’re going to do, what their character is, than they care about the color of their skin, and most of the people in this audience are conservatives. 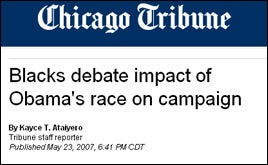 It matters not to us. You’re the ones talking about it. You’re the ones that can’t let this go. You’re the ones that come up with this term ‘magic negro’ to describe a bunch of white liberals who are voting for the guy simply out of guilt. That piece in the LA Times put down everybody, put down Obama and it put down the whites that are supporting him, admitting — by the way, confirming what I’ve always said, that you people on the left are driven by things other than ideas. You’re driven by surface things. You’re driven by the color of somebody’s skin or their gender or their sexual orientation or their position on global warming or whatever, not even that. Then you dare to throw out all these accusations at people in this audience and me at how we’re the surface — we have more depth than you could ever sink to. Now, let me share some of this with you. This is a story out of St. Louis, but it’s in the Chicago Tribune.

‘In a converted Shriners temple, presidential hopeful Barack Obama stood before a majority-white crowd on a recent afternoon and spoke of uniting the country beyond race. Nearby, at a soul food joint called Sweetie Pie’s, a mostly black crowd debated whether his race would keep America from ever giving him the chance.’ He’s got the chance! In fact, he’s doing so well he’s got the Clinton campaign panicked and so, frankly, does the Breck Girl’s campaign. The Clinton campaign’s out there wondering, what the hell? They thought this was going to be a cakewalk, and it’s not. At any rate, ‘Leah Merrifield, a 50-year-old college administrator, who thought Obama’s chances are good, ‘The workplace is much more integrated, as is society with blended families. You have more white people with more personal experience with people who are different.’ Her sister, Carolyn Christiel, 55, a teacher, was unconvinced. ‘Society is so tainted,’ she said. ‘What makes me think they are going to let this black man win?”

Two words for you. The Oprah. If we’re such a racist society, how can the Oprah be the most popular and the highest paid television personality in this country? ‘The basic question,’ according to the Chicago Tribune, ‘The basic question is whether society has made enough progress on race to elect a black person to lead it. In a country where a black man still can have a hard time catching a cab…’ (Laughing.) Danny Glover! Danny Glover can’t get a cab in New York, he says, because the guys that wear turbans won’t stop for him. ‘If a black man can still have a hard time catching a cab, can he be president of the United States?’ I don’t think Obama takes cabs. ‘Opinions within the black community are mixed. In some circles there is a reluctance to believe that white people will vote for Obama.’ You ever heard of the white liberals that can’t wait to just to get rid of their own guilt? ‘While some blacks question whether he is black enough, others think that in the end he will prove to be, in effect, too black. They say they are resigned to the notion that he is doomed, not by black ambivalence but by white prejudice.’ I can’t keep up with it anymore, folks. I literally can’t keep up with you Drive-By Media types and you liberals. Could somebody write a story on what this guy’s policies are? Could one of you write a story and leave his wife out of it, without griping at his wife. How in the world can you sit there and gripe at Michelle Obama and give Hillary Clinton a free pass on the feminist stuff?

So the Chicago Tribune comes through again. Obama too black, not black enough. One final quote here, ‘Lynn Small, a 70-year-old retired advertising and marketing executive from Chicago, agreed. He said that while there are pockets of white America that could accept a black president, the country as a whole is not ready. ‘They give lip service to the right thing,’ Small said, ‘but when they get in the voting booth it will be hard to pull that lever.” They don’t know what they’re talking about, but they’re in the Chicago Tribune, so they’re experts. Chicago Tribune found ’em, they’re quoted, they’re experts. They have no clue what people are going to do in the voting booth. You see what’s being set up here. If he wins, ain’t because he’s black, it’s because he’s multicultural. No, the race problem is not solved. If he loses, it will be totally because he’s black and the white bigots in this country wouldn’t vote for him.