We Don?t Want to Do Nothing, Secretary Chertoff

RUSH: We go to Philadelphia. Steve, you’re up. Nice to have you here.

CALLER: Hey, Rush. Pleasure to speak to you, sir.

RUSH: What if it destroys the country? Do you still think the Republicans ought to share credit for that?

CALLER: Well, I don’t think it will destroy the country. That brings me to my second point. Because I think someone has to pay, someone who is making minimum wage has to pay $5,000 and buy another ticket back somewhere, I think that means they’re somewhat self-reliant, that they can pay this money on minimum wage, they’re likely to be a harder worker, maybe even more likely to vote Republican. Do you see what I’m saying on that point?

RUSH: Well, I understand what you’re saying. I don’t understand why you’re saying it. To discuss this with you I have to be redundant, and I assume you listen so you know my point of view disagrees with you. I don’t think they’re going to pay the $5,000 fine. I think after this thing becomes law, the Democrats are going to say, ‘Those fines are atrocious. That’s taking food out of the mouths of starving babies. Where they are going to come up with this?’ No, they’ll waive that. They’ll waive all of this. There’s not going to be any disincentive to coming here. 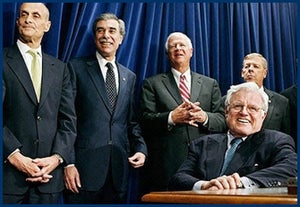 RUSH: There isn’t. But you’re looking at it purely politically. You think that this thing is going to pass. You’re coming at it from the understanding that, ooh, legislation, big legislation. Big legislation is always celebrated, and the Republicans better get their piece of it or they’re going to pay politically. You’re not really examining the details of the legislation and what the potential pitfalls of this are. I understand your basic perspective. You’re of the school of thought that the Republicans, and they think this, too, will be wiped out if they are seen on the sidelines of this. Believe me, that is Washington-think. That’s no different than thinking, ‘We gotta do something, even if it’s worse than what we got now. We gotta do a bill, we have to have a bill. That’s how we’re measured. Do we get a bill, did the bill pass, or did the bill go up in flames? If it goes up in flames, oh, my God, they’re going to think we’re do-nothing up here.’ So this whole notion of do-nothing Congress is what they’re worried about. And, frankly, the more they do nothing the better off we all are. We have enough laws, for crying out loud. The media is obsessed with what goes on in the halls of Congress. The average citizen isn’t. We don’t orient our lives around this notion, ‘Will they get the legislation passed today?’ If you do nothing, it’s a silent amnesty program? Well, wait a minute, wait a minute, wait a minute.

I understand that Chertoff is saying if we do nothing, literally nothing, then we are conferring a silent amnesty on everybody. What’s the difference? Governor Schwarzenegger, ‘Well, we got hidden taxes.’ So? You’re taxes is going to make it visible? What’s the difference, a tax is a tax. Amnesty is amnesty, whether it’s hidden or visible. Now, the thing about that is, those of us that are saying do nothing, are not saying do nothing, do nothing with this bill. Focus on border security. Really get serious about that. Chertoff also says in this story, well, some of these people out there are just hoping and praying something isn’t going to happen, and that’s the deportation of 12 million people. And, of course — because we can’t. We can put a man on the moon. We can get whales out of deltas and get them back to the ocean. We can play romantic classical music for sharks, stupidly hoping that they mate, but we can’t find 12 million people and find a way to — moving on. I was in a fine mood here. I really was. Chuck in Pittsburgh, nice to have you, sir.

CALLER: I may put in a fouler mood with this. Earlier you were talking about terrorism?

CALLER: And I just want to mention that on August 23rd, 1996, Osama bin Laden declared war on Americans.

RUSH: Yeah, but he didn’t mean it then.

CALLER: And sent a message to his brethren all over the world.

RUSH: Yeah, but that was during the Clinton years. He didn’t mean it. He doesn’t mean it now. Listen to the Breck Girl. The war on terror is a bumper sticker slogan.

CALLER: Well, here’s a quote from the declaration. ‘Terrorizing you while you’re carrying arms in our land is a legitimate and morally demanded duty.’

RUSH: I know that you’re reminding us of this, and it’s true, I remember it. You’re reminding the audience of this so that they might take it seriously. Look, he declares war, blows up the World Trade Center and tries the Pentagon and one other place, if you still have a bunch of people who don’t think that we’re at war after that, you know, giving them an 11-year-old quote from bin Laden isn’t gonna shake ’em loose. David in Ft. Lauderdale, Florida. Hello, sir.

CALLER: Hi, Rush. I wanted to add a comment on the immigration. I haven’t changed my mind on that, and I think that the American people, the outrage is a reflection and a reaction to how burdened we are with the cost of taxes and entitlement programs.

RUSH: Yep, absolutely. You nailed it.

CALLER: Yeah. If there was a flat tax and private Social Security, a privatized Social Security, nobody would care. We love immigrants. We love all people. Most conservatives I know never speak ill of immigration. It’s the inequity behind this move of socialized slavery that’s, you know, infected our country since the new raw deal, actually. So, you know, a kinder and gentler approach would be to treat everyone fair, including the new immigrants.

RUSH: Well, that’s exactly right. The people that live in California think it’s lost. From a Republican political standpoint, California is lost. We used to run California. Used to own it. If you want a little microcosm of what this legislation might mean to Republicans nationwide, take a look at California. We lost it, folks. It’s permanent Democrat, permanent Democrat. Well, permanent for a while. Who knows if anything will change down the road. But that’s exactly what I go out and talk to people about. It is the pressure. They know they’re being forced to pay for hospital visits and health care and education for illegals and their kids, and they resent the hell out of it. It’s only going to get worse.

One other thing, this business with Chertoff. Nobody is talking about doing nothing. This is the problem that the people in Washington have. If you oppose this bill, they tell everybody else that we who oppose it want to do nothing. We want to fix it! We do not want to make it worse! We do not want to expand the status quo. We do not want amnesty. But it all boils down and reverts back to this notion that we can’t fix anything without legislation. For crying out loud, all new legislation is is a whole bunch of new laws and what we’re doing with these new laws is saying that current laws don’t work. What’s magic about the new ones. If we’re not going to enforce these, why are we going to enforce tomorrow’s new laws? It’s just about politicians being able to parade around the 4th of July picnics, ‘We got the bill done. You can count on me. I got the legislation through. We made that bill happen,’ and they think, wow, wow, my guy got that bill done, oh, I’m so happy, my guy got the bill done.

The American people don’t run around and think about, ‘Is the bill done or not?’ All the social occasions I go out and I never hear anybody talking about, ‘I hope they get the bill done.’ I mean, issues like this they do, but as a matter of interest, the American people are not following the intricacies of legislation and basing their happiness on whether or not the bill gets done, we’re going to have a bill. But these people in Washington, inside the Beltway, that’s all they think about. So when you come out and say, ‘Well, doing nothing is blind amnesty,’ nobody’s talking about doing nothing. I mean, you know, really all we’d have to do is enforce the current law! (Gasping.) Enforce the current law. That’s what I take from Chertoff’s comment. He’s not even willing to do that. So if he’s not going to be willing to enforce this law, why enforce the next one? With those $5,000 fines? That’s such a smoke screen anyway. There aren’t going to be $5,000 fines or payments. Check out the Z visa, see if you see it in there.