The Tahoe Fire & the Spotted Owl

RUSH: I want to talk about this fire out at Lake Tahoe, because it’s fascinating. There are two schools of thought on who’s to blame. One school of thought is global warming. The other school of thought is environmentalists. Now, we can’t have it both ways. I got this from my buddy Noel Sheppard at NewsBusters.com. ‘Depending on which newspaper you read Tuesday morning, the wildfires in the Lake Tahoe region of California and Nevada were either caused by global warming or environmentalists. In Northern California, just a few hours from the devastation, the number one paper in the region, the San Francisco Chronicle, chose to blame the fires on overdevelopment in Tahoe, and, of course, global warming.’ And here’s an excerpt. ‘From Gold Rush clear-cutters to modern home-builders, people have brought changes to the Tahoe basin that have fueled the intensity of this fire.’ It’s 2,500 acres. And, by the way, it’s flared back up again. ‘Just letting nature handle the recovery isn’t an option after 150 years of human activity and mismanagement. And, of course, this: The Forest Service’s Safford noted that even the climate has come under human influence, as evidenced by global warming and increased forest fires.’

However, the people that live out there say it’s the environmentalists. ‘They won’t let us thin out these forests. They make this stuff remain as it is. It’s a fireplace, it’s a tinderbox.’ The Tahoe Regional Planning Agency said that they were angry at bureaucrats and environmentalists who made cutting trees and clearing of land difficult. There was always too much red tape, they say. Now it was too late. ‘I hate to get political…’ This is the guy from the Tahoe Regional Planning Agency. ‘…but environmentalists wouldn’t let us cut down the dead trees.’ People in the Bay Area, however, were led to believe the fires are all due to overdevelopment in Tahoe. The media’s favorite culprit for every problem on the planet of course is global warming. It’s a disgrace, this kind of disparity in reporting. But of course in the San Francisco Chronicle you have agenda reporting, and in the case of the people charged with preserving the Tahoe area, how in the world does development out there start fires? So global warming is responsible for everything, but the truth of the matter is, the environmentalist wackos in this country are the instigators of more of these kinds of problems than people want to admit, and they’re afraid, people are afraid to fight ’em.

RUSH: We start with the phones in Redding, California. James, you’re up first today. It’s great to have you on the EIB Network.

CALLER: I just wanted to call and comment about the Lake Tahoe fires. One thing I’m not really hearing — I keep hearing about global warming — I have not been hearing about the poor forestry management over there. One of the reasons everything’s burning is, with all the environmentalists living there, they don’t allow any removal of deadwood or undergrowth.

RUSH: Yeah, I know, I just did a story about this. The problem with it is you’ve got the environmentalists who have got the local outfit that manages this stuff totally intimidated.

RUSH: Deadwood, they’re not allowed to cut down. They’re not allowed to thin these forests at all and take away some of the fuel that a fire would feed off of. Then you’ve got the San Francisco Chronicle, and other liberal newspapers, saying, (summarized), ‘No, this is not the problem of environmentalism! This is global warming and development. There are too many people live there who shouldn’t be living there. We’re destroying pristine nature.’ It’s, frankly, ridiculous, the idea that human beings are the only ones that are unable to alter our environment. We’re part of nature as much as everybody else is, and every element of nature alters the environment in order to thrive, and we do, too. The idea that we are not allowed to interact with nature because we destroy it and we disturb it and so forth is another one of these bleeding heart, left-wing belief systems that has its roots in, ‘(sigh) It’d be so nice if we didn’t cut down that tree. It’d just be so nice if people didn’t live that close to the lake. It’d just be so nice,’ and, of course, that’s the emotional appeal that gets everybody: ‘Oh, how can we harm these poor people? We are a nice people,’ we want to be, and we end up not being nice to ourselves. (interruption) What? We just had a question asked by one of my obedient staff, ladies and gentlemen: ‘How does a fire start because of global warming?’ The fire doesn’t start because of global warming. But the inability to put it out and to keep it from spreading, high winds, unusually high temperatures, lack of rainmaking the timber dry and just lethal, that is because of global warming. (interruption) Well, of course, because those forest fires started by lightning, and lightning is nature. But a forest fire where human beings live is not nature; it is destruction. I can’t believe you still haven’t figured this stuff out after 19 years of listening.

RUSH: Now, remember two weeks ago we told you that the northern spotted owl was back in the news, back in trouble, and the numbers of pairs of northern spotted owls is continuing to dwindle out there? Despite all of the preservation of pristine, old-growth forests, where we were told for years in the eighties and nineties, that only there could the spotted owl thrive. If it didn’t have pristine, old-growth forest, why, it would die out — despite the fact that pictures of them living in the red K in the Kmart sign were all over the place. 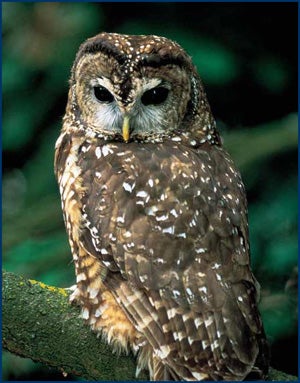 So this story is in the Christian Science Monitor: ‘Northern Spotted Owl’s Decline Revives Old Concerns — [M]ost agree, could reignite the ‘timber wars’ of the 1980s and ’90s, with lawsuits flying and activists tree-sitting to stymie loggers whose livelihoods depend on access to national forests,’ and that’s what the spotted owl controversy was about in the first place. However, this story does mention one thing and leaves out something else that’s crucial. Get this. Folks, this is a great illustration of how you should be skeptical of everything you read and see in the Drive-By Media, because when the spotted owl controversy was up, we were telling you that this argument that they will only live in ‘old-growth forests’ was wrong. It couldn’t possibly be true because they were spotted living elsewhere. In fact, Weyerhaeuser or somebody was replanting. You know, they replant trees when they cut ’em down. The people in the wood business, the timber business need product. The tree is just a crop. It takes a little bit longer than a stalk of corn to grow, but they plant these things constantly. They spotted northern spotted owls living in young trees, certainly not old growth. What’s ‘old growth’ anyway?

‘Old growth, Mr. Limbaugh, is trees that have been here since the creation of time!’

‘Yeah, well, we’re all here thousands and thousands of years. If those things are as old as the planet, we could climb to the moon on them. Idiot!’

I remember these people calling, talking to me about this. Now, listen to this: ‘The latest recovery proposal tries to incorporate new information about where spotted owls prefer to live (which is not always old-growth forests)…’ Really? Yes. ”We’ve had years of intensive scientific study on the northern spotted owl, so we’ve learned a lot more about it, a lot more about the habitat it needs,’ says Phil Carroll, spokesman for the FWS’s Oregon field office in Portland. For example, he says, in some parts of its range, it’s not quite as dependent on big blocks of old growth as we had thought before.” So all of this in the eighties, about the spotted owl and putting the timber business out of business, was a hoax! They knew then it was a hoax, and now they’ve got the guts to report it. What this story doesn’t mention, ladies and gentlemen, about the dwindling numbers of spotted owls? You guys remember the story on this two weeks ago? You know what’s happening out there. There’s a predator owl out there called the barred owl, and pardon my French, but the barred owl is kicking the ass out of the northern spotted owl. And they’re intermingling and mating with them. So you’ve got the north sparred bowel — or owl, or whatever. So these big barred owls are coming in there. They’re taking over. They’re wiping out some of the spotted owls, but this story doesn’t mention that as one of the reasons why there are dwindling numbers of northern spotted owls. (interruption) They’re raping female spotted owls, exactly. If you’re going to need an abuse billboard anywhere, put it out there in the Great Northwest forests to get these barred owls to stop picking on the northern spotted owl.

RUSH: Speaking of this Tahoe fire, I forgot to mention this. They have a restriction out there that you can only cut timber, I think it’s ten or 12 feet from your house. I’m not sure about the number. But, this guy broke the law. He said to hell with it, and he cut it 50 to 70 feet away from his house. His house is the one standing. His house is standing! A lot of his neighbors who followed these regulations houses have burned to the ground. Fire department people out there, fire experts have been warning not just in Tahoe, but in the El Dorado Forest, ‘You guys are sitting on a powder keg out here.’ But, you know, Dianne Feinstein and some other people introduced legislation to thin out some of these forests. The Sierra Club’s been appealing it for ten years and holding it up. There are countless illustrations. It’s just another illustration of all this do-gooderism, and, ‘(sigh) It’s just so nice to look at those trees. It’d be so mean to cut them down. They have feelings, too, and of course what about nature and what about tourism? We love watching those trees. They’re so nice to look at. They’re so pretty.’ Yeah, and now we’re talking about the dead ones. Every one of these do-gooder, nice — or motivated by nice — ideas that the left have, every one of them is wrong. Every one of them ends up causing destruction, either to families or to property or the overall culture. It is not even arguable. Liberalism, among all these other things, is just destructive, under the guise of ‘being nice.’ Yes, being nice and compassionate and thoughtful and feeling good about yourself — while everything goes to hell around you.