The Power of Rush Limbaugh

RUSH: Great to be with you, folks, as we kick off a brand-new week of broadcast excellence here, Rush Limbaugh, man who runs America, and, by the way, this sentiment is being picked up even by members of the Drive-By Media. Yesterday, on ABC’s Inside Washington, a local show in Washington, DC, the host there, Gordon Peterson. During his panel discussion on the defeat of the immigration bill last week, this is what Evan Thomas of Newsweek had to say. 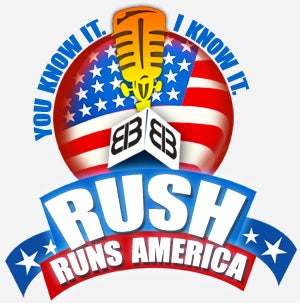 THOMAS: The unfortunate reality is that Rush Limbaugh is more powerful than President Bush. I mean, talk radio had more power in this than the power of the Oval Office.

THOMAS: It shows you where we are.

RUSH: Just shows you where we are. Ho-hum. (Laughing.) The man who runs America, you know it and I know it. One more, Dan Henninger, one of the editorial writers, columnist, Wall Street Journal, deputy editor there was on Fox News Channel’s Journal Editorial Report with Paul Gigot, and Gigot asks Henninger, ‘Why haven’t liberals been able to succeed on talk radio? They tried?’

HENNINGER: I think it has a lot to do with the subject matter. I mean, 90% of talk radio is conservative. Let’s think about what their target is. The target of conservative talk radio is the state, it’s government. For Rush Limbaugh, it’s like shooting fish in a barrel. The government is always doing stupid things, whether it’s the bureaucracies or the Congress. The liberals love the government. They love the state. They’ve gotta go on radio and defend this stupid stuff? Their target is the private sector, which is a really hard thing to make fun of.

RUSH: Here’s Kyle in Lake County, Florida. Kyle, great to have you on the program.

CALLER: You there, Rush?

CALLER: Rush, the Dubai thing is what I’m leading into, as you contrast your position and talk radio’s position on the Dubai Ports deal and how you made cogent, logical arguments about that, yet you never got anywhere with changing American public or the lawmakers. You had no influence on that decision. Yet here, everybody’s trying to say that it is you and talk radio who sank the immigration deal. So can you just give an analysis what you think?

RUSH: I’d be happy to give you an analysis of this, but I’m afraid that if the Drive-Bys are listening; it will destroy ’em, because the Drive-Bys have this image of people like you, Kyle, of being literal sponges. Your head’s empty, and you don’t go anywhere for news or information until you turn on this program from noon to three, and after that you turn it off and you don’t know anything else. So they think that all you know is when I tell you. You are a mind-numbed robot. You do not have a mind of your own. ‘It’s not possible! Why, this many people doing this, having this effect? It’s not possible! They couldn’t have minds!’ You gotta understand, liberals look at average Americans with contempt and condescension anyway. ‘You’re not bright, you’re not smart,’ and they fuel that belief by furthering the notion that I’m the pied piper. I’m a Svengali and you’re just walking robots.

Well, what both of these incidents show — and the Pew Center for People and the Press has proven this and shown it in research — is this is the most informed broadcast audience in this country. You are fully able and do to make up your mind on issue after issue, and the Dubai Ports deal is a great example. I was one of the lone voices that was looking at that in a different way from most people, but the people made up their own minds. I might have changed a few, I had some people call here and say so, but that was just like the immigration bill. People had their own minds made up because they are smart. You are engaged and involved. You follow this stuff every day, and you know what’s right and wrong in America. You know the traditions and institutions you want to preserve. You don’t need a pied piper coming along filling your head with things because it’s empty. It’s just the exact opposite. That’s what they don’t admit. But they’re out there thinking you are, and that’s why they’re thinking I’m more powerful than the president — and they’re right.