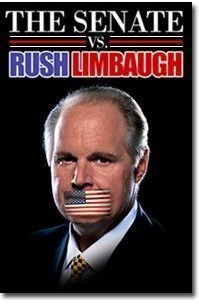 In a sense, just to make a point here — what are we, the 11th of July today? I would challenge Congress to come up with a Fairness Doctrine, actually. Liberals in the Senate have it half right when they talk about the lack of balance and the lack of honest reporting. They’re dead right when they talk about that. It’s just they’re wrong about where all these things are happening. I will agree Americans are not getting the information they need. Americans are being manipulated by propaganda. I agree with the Democrats on this! Hour after hour, day after day, week after week, the American people are being propagandized, wherever they go. Now, I can offer proof of my assertion. I have hard numbers that prove the point, that Americans are not getting the truth, that they’re getting propaganda. By any objective measure, ladies and gentlemen, our economy is one of the best in history. By any objective measure: low unemployment, record low unemployment, low inflation — at the same time! Did anybody ever think you could get both of those at the same time? We’ve done it. We have a booming investment climate that’s benefiting everybody who is in the stock market. Even those of you who don’t think you are, are.

If you have a pension plan, if you have a retirement account, if you have any kind of program like that, you are in the stock market, and your pension plan is benefiting tremendously from this booming investment climate. Tax revenues are flooding the federal government! The federal deficit is going to be $205 billion. The ‘Deficit Monster’ is in the process of being slain. There’s more money rolling into Washington, and at the same time affluence in the country is going through the roof like never before. These are all facts. These are things that I can prove. It’s not Barbra Streisand. The objectives that everybody says they want in the economy are happening. Yet, for the past year — six months before the 2006 election to a year before the 2008 election — what do Americans say they think about the economy? Well, you can grab any poll you want. I happened to grab a poll here from the American Research Group: ‘A total of 16% of Americans say that the national economy is getting better; 28% say it’s just staying the same; 55% say the national economy is getting worse.’ So let’s round the numbers to make this easier: 20% say the economy is getting better and 50% say it is getting worse.

Furthermore, one-third approve of the way Bush is handling the economy. Two-thirds disapprove. This is not a measure of reality! This is a measure of liberal Drive-By Media propaganda. By any objective measure, our economy is one of the best in history. We have low unemployment and low inflation. What we have here is not measures of reality in these polls, and I don’t think we have a measure of reality in the Iraq polls, either. We don’t have measures of reality or attitude. This is not measuring the effects of Rush Limbaugh radio. Sixteen percent think the economy is getting better and 50% think it’s getting worse? What these figures show is the impact of unregulated, left-wing propaganda repeated hour after hour, day after day, week after week by the unregulated Drive-By Media, the unregulated liberal newspapers, the unfettered liberal newspapers. Free speech is the lifeblood of our nation, my good friends, and if we’re going to do anything to modify it, let’s look at where the problem really is. It ain’t here on talk radio! Senator Dianne Feinstein is concerned that Americans are not getting the right information out there?

Well, senator, if you want America to get the information they need — and I want the American people to get the information they need, the only difference is, I want to get it out, and you want to manage it. You want to manage news that you don’t like. You don’t want good news. These people in this poll, or you can cite any poll. You go to any poll of the economy you want and these numbers will be pretty much the same. So you talk about need for a Fairness Doctrine? Okay, I’ll agree with you. There is a bunch of propaganda out there. There is a bumbling of managed news. There’s inaccurate reporting — and it’s doing great damage, not only in the economy, but with the war in Iraq. Of course, the whole point of these polls is to keep you unsettled, unhappy, miserable, on the edge of your chair, in crisis mode, not believing the good news that you see around you, not trusting that it’s real, not trusting that it will last, because you’re hearing everywhere else that your neighbors think it’s horrible, very bad — and then you throw in the gas price, and then you throw in Algore and global warming and how we’re all destroying the planet with our affluence. Well, is it any wonder you get poll numbers like this? So, yeah, let’s regulate the Drive-By Media. Let’s have a Truth Doctrine for them.