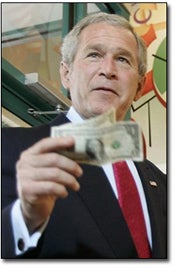 RUSH: I think this needs to be noted for historical purposes. On October 7th of 2002, the Dow Jones Industrial Average, having been battered by the Clinton-Gore dot-com crash and the aftermath of 9/11 damage and fear and pessimism, October 7th on 2002, the Dow Jones Industrial Average hit 7,181. That’s less than 7200, for those of you in Rio Linda. Today, less than five years from October 7th of 2002, the Dow all but doubled. It did cross 14,000 today. It got back just under 14,000, but it crossed 14,000 today, a humongously huge story that is not being reported at all because it doesn’t fit the action line or the template of the Drive-By Media, that the economy is bad. There are four points worth noting about this. One, the Bush economic plan. Do you ever hear those words, by the way? You don’t. The Bush economic plan worked, and it worked brilliantly.

Number two, the so-called Drive-By Media never reported, never celebrated, nor did it endorse the Bush economic plan, making it the only state secret that’s not leaked to the liberal media. Nobody is leaking to the media how good the economy is. Number three, if we need fairness and balance and equal time, we don’t need it with talk radio, we need it with liberal need because this is another one of these great stories that’s not being reported anywhere but here. Of course the liberal intelligentsia learns nothing from this and clings to their depression model for governance. All of these Democrats running around on their poverty tours one way or the other, populist tours, the country is falling apart, everybody is a paycheck away from being homeless, soup lines are everywhere. It’s a message of doom, doom and gloom, defeatism, and yet there is good news all over that is not being reported.

RUSH: All right, I gotta make a small little correction here, ladies and gentlemen. I indicted the entire Drive-By Media for ignoring this great economy and, of course, the performance of the stock market, the Dow Jones Industrial Average. It has been brought to my attention that today on the Today show, the correspondent from CNBC, Erin Burnett, did a report on the economy, and here’s a montage of what she said. Now keep in mind, I don’t want you to faint here. This did appear on NBC on the Today show. 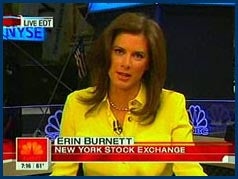 BURNETT: You know, it’s an amazing thing here. We’re looking at the Dow Jones Industrial Average, up 30% over the past six months, 30 days this year alone we have had record closes for that index. So it’s really another day, another record on Wall Street. It’s also worth noting that while politicians talk about two Americas, virtually all Americans are seeing wages rise and unemployment is at a historic low. The issue of taxes is important here. The top 1% of Americans pay 30% of taxes in this country. The bottom 20% of American wage earners pay only 5%.

RUSH: Now, those of you that listen to this program regularly and visit my website know all of that. That’s not news. Do you realize that the people who watch the Today show, how many of them heard that, that is news to them, how well the stock market’s doing, without criticizing the usual line, ‘Women and minorities hardest hit. The poor being left out. It’s just not fair.’ None of that was in there. And then the tax rates and who is paying what in this country, this reference here to ‘politicians talk about two Americas,’ a reference to the Breck Girl out there. So my apologies, I want to give an attagirl here to CNBC correspondent Erin Burnett, probably now ruining her career because I have praised her. That will cause the others in the Drive-By Media to question her loyalty to the cause.

RUSH: All right, last hour I did a little riff on how great the economy is doing, and I led with information about the Dow Jones Industrial Average crossing 14,000 today. It’s not there now. It’s close, but it did cross the 14,000 mark, first time ever, earlier this morning. I pointed out that in September or October of 2002, not quite five years ago, the market bottomed out after the Clinton-inspired dot-com bust, at under 7200. The market has almost doubled in, what, six years, five years? The Drive-By Media totally ignored it. It’s such a secret that this news would have to be leaked to them if they were to ever learn of it and report it in what is called the mainstream media. I then discovered that it had been reported in the Drive-By Media, and I had to issue an apology. And I did. I played the report. We have a montage of what was said about all of this on the Today Show today. 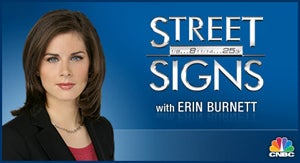 CNBC’s correspondent Erin Burnett did a report, and we put it together in a montage form. After playing the report, which I’m going to play for you in just a second, I apologized to CNBC and the Drive-By Media and I gave great credit to correspondent Erin Burnett for dutifully reporting the truth, especially what you’ll hear her say about taxes and so forth and their relevance in all this. Then I said, I am almost sorry I gave her credit because any journalist who gets credited for good work by me automatically encounters problems with their colleagues and bosses in the Drive-By Media. Well, during the last commercial break, ladies and gentlemen, our office got a phone call from CNBC wanting a transcript of what I had said about their correspondent, Erin Burnett. They’ll probably call back and want this transcript again, H.R. They’ll probably want both of them. Here’s the report that we played last hour.

BURNETT: You know, it is an amazing thing here. We’re looking at the Dow Jones Industrial Average, up 34% over the past six months, 30 days this year alone we have had record closes for that index. So it’s really another day another record on Wall Street. It’s also worth noting that while politicians talk two Americas, virtually all Americans are seeing wages rise, and unemployment is at an historic low. The issue of taxes is important here. The top 1% of Americans pay 30% of taxes in this country. The bottom 20% of American wage earners pay only 5%.

RUSH: This was on the Today Show today. This was why I had to apologize because CNBC’s reporter actually said this, and more. This just a montage of it. So the news did get out there. People that watch the Today Show probably heard much of this for the first time, scratching their heads. It makes so little sense to them.

Eric in Latham, New York, I’m glad you called, sir. You’re on the Rush Limbaugh program. Great to have you here.

CALLER: Well, I want to comment, how are Hilary and Obama raising so much money with this awful economy?

RUSH: And there’s so much poverty out there.

CALLER: Yeah. Hey, one of the things is that usually the Dow is what makes the news. I’m so glad you touched on that at the beginning of the show last hour. But really, all of the indices, you know, the much broader indexes, are near their all-time highs, except for the NASDAQ, all of them are near their all-time highs. The only reason the NASDAQ is not is because all of those dot-coms are gone from the Clinton era and, you know, we’re not going to see 5,000 on the NASDAQ any time soon, but the fact that it’s halfway is remarkable in itself.

CALLER: Yeah. I mean, basically we survived the devastating attack on the financial markets, it’s basically a lot of what 9/11 was about, too, and the fact that we’re back is really a remarkable achievement.

RUSH: It is. And of course that’s why I said the Bush economic plan. You never hear the Bush economic plan referred to, but there is one, and it is working. But, meanwhile, the Democrats are out there trying to browbeat the American people into believing that their lives are horrible; that they have no future; that their kids are not going to have any opportunity out there because Bush has destroyed the economy and we, to fix this, need to raise taxes on the rich again. That’s what we need to do.

CALLER: Yeah, I know Bush is not that kind of guy but, you know, I always wish for my own personal thing is that he would get out there and really push this. Americans just got their second-quarter statements, and it’s all good. If he was just out there saying, ‘Hey, it’s my policies that are doing it,’ I think that would help his numbers.

RUSH: I agree with you totally on this. There’s no PR effort, sales effort, or even just beating their chest, ‘Hey, look what we did.’

RUSH: That doesn’t take place. I think Bush thinks that that kind of behavior demeans the office. He is content to let history, even after his life is over, be the judge of how he did.