The George Washington of Talk Radio

RUSH: Marisa in Sappington, Missouri, welcome to the EIB Network. It’s nice to have you with us.

CALLER: Well, thank you, Rush, and whether you’re A or B, I think you’re practically perfect, so —

RUSH: This is really going to anger Joe. Folks, I gotta tell you something. Joe really wanted to talk to me about how he’s tired of hearing people like you call. I didn’t have time. He was too frustrated about worried about irrelevancies here, about the war in Iraq. What he wanted to say was — it’s probably my fault. I should have just steered him there, but my Type A took over. He wanted to complain about the way John Kerry gets treated on this program by me and callers and that caller to C-SPAN, and yet women like you and other callers call and tell me how wonderful and fabulous I am, and that makes him mad. That was what he really wanted to talk about.

CALLER: Well, he’s going to be even madder (laughs) after he hears what I have to say.

CALLER: I hope you’re going to let me get my whole message out, because I don’t have a 144 IQ like that guy yesterday, but it is 143-7/8ths . So just bear with me. Well, you know and we know that you’re running the country. 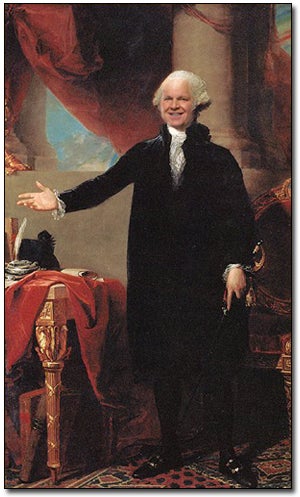 RUSH: And I think that you and George Washington are practically the same. You could be brothers, because you’ve built a whole war, if you will, a whole army of people to hold together to a conservative ideal by yourself. You started with nothing, and you built it, and it is what it is today, and George Washington enabled the country to win the Revolutionary War by holding together a pathetic army through thick and thin when everything was going terribly, and he really, almost by himself, had the magnetism and the trust and the belief of all the people. That’s what made everybody stick with him — and the thing is, for whatever reason, there’s only one person like that who comes along maybe in a whole generation, who is like that, who has those kinds of qualities. He was the one then, and I’ve heard historians say that without him maybe we wouldn’t even be here, and I think you’re that way today. Without you, this conservative movement probably wouldn’t even be here. But after fighting a long and difficult war, I’m sure the first thing that George Washington wanted to do was go back to Mount Vernon and put his feet up and enjoy life a little bit, but unfortunately, because he was so much the way he was —

RUSH: Yeah, but, you know what?

CALLER: — he was the only one who could be the president and hold this country together.

RUSH: They offered to make him king.

CALLER: He was the only one that everybody believed in and he need trusted, and unfortunately for you because you know you don’t want to be president, I think you’re the same type of person. You are the only person who everybody trusts and everybody believes in, and I think the conservatives believed and trusted you more than any of the other candidates that are running, and I think, you know, if you got on the air Monday (since you won’t be here tomorrow), and said, ‘I’m going to run for president in ’08,’ that’s all you’d have to do, and you would be elected —

CALLER: — and you would save our country.

RUSH: That’s awfully nice of you to say, but no.

RUSH: It’s awfully nice of you, but really, this is embarrassing for me to say because I can’t do anything about it. I’ve gotta go because I’m way long in this segment. I have to go to the next profit center time-out.

CALLER: Well, think about it when you’re playing golf.

RUSH: All right, I’ll think about it. But thank you. I appreciate it more than you know. I continually am stunned when I hear these kind of things. The only difference between me and George Washington is if somebody wanted to make me king, I’d take it.