RUSH: An e-mail. Subject: ‘Could you clarify this for me?’ ‘Dear Rush: I just heard a Hillary sound bite that you played where she said this administration has made diplomacy a dirty word. Could you please list history’s top ten greatest diplomatic successes to illustrate for your listeners why the work of the state department and diplomacy generally is soooooooo important to our nation’s safety and security?’ Now, I only got this e-mail during the break a few minutes ago. I must confess I’ve been thinking very hard about this, and you can’t come up with one. 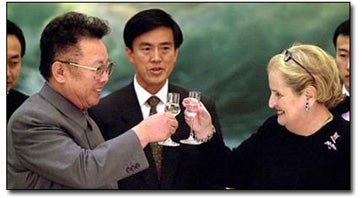 The North Korea six-party talks, diplomacy. Okay, there’s a great illustration of how it doesn’t work. Diplomacy with the Clinton administration and Madam Albright. We give them all this nuclear stuff, they, a bunch of communists, promise they’ll only use it for nuclear power, satellites fly over the country at night and they have no lights on. Don’t have any electricity there. They’ve used it to gin up nuclear weapons manufacturing. Now they promise they won’t do it anymore. So, okay, but the jury is still out on that. Give me another one. It was a purchase. By that definition, you say buying Manhattan for 24 pizzas from the Indians or whatever it was. That’s not diplomacy. That is not diplomacy. It was a purchase.

We snookered ’em, but we bought it. I mean, you can’t call a negotiation on a sale, diplomacy. You just can’t. Give me another example. Don’t cite for me. ‘How about the armistice after we defeated Japan?’ No. No, no, no. That’s not diplomacy. Sadat’s peace agreement with Israel? That’s really worked out, hasn’t it? Sadat’s peace agreement with Israel. Yeah, Egypt has not fired on them, true, but whoop-de-do. Hezbollah the other day said they’ve got rockets now that can hit any part of Israel. Hezbollah also says that they’ve got cells working to infiltrate the United States to conduct operations here. Yeah. Okay. Handing over the Panama Canal? We’re talking successful diplomacy! (Laughing.) Okay, that led to US… Okay, well, if you people out there want to help this e-mailer understand that there are some great diplomatic successes that have kept the … (interruption) Monroe Doctrine. Was that diplomacy? No, those are policies, a decree. That’s true. Top-town policy. We don’t have the guts to do that anymore. What we have is guys like Barack Obama going to tell Bashar Assad and Mahmoud Ahmadinejad, ‘You guys better fix Iraq when we leave.’ I’m sorry to laugh at the magic negro, but I that answer still has me in stunned amazement.