No Coincidences with Clinton, Inc.

RUSH: We had a knock-down, drag-out at my house yesterday over this story in the New York Times about the letter story on Hillary. I’m going to explain what the knock-down, drag-out was about and why, because it was classic. These are letters that Hillary Clinton wrote to some guy between whatever the year they were, 1965 and 1969, when she was 18. Apparently the press heard about these letters, they called this guy, he’s a teacher out in San Diego, former friend of hers in Illinois, and he just gave them the letters. This just doesn’t happen by accident. This is all designed. After all of Hillary’s years in public life, why now, and why after the cleavage controversy, why now does this story appear? If you read the letters — and you have to understand the New York Times when you read these letters, and you have to understand their agenda, you have to understand what they’re trying to persuade people of.

The thrust of the story is how she had to break away from her strict, mean, conservative dad. Her family was just too conservative and she had to break away, had to get away. In fact, she wanted to go to Africa when she was a young lady, but she didn’t go because she was afraid of what her dad would say. She was afraid of her dad’s reaction. There’s nothing revelatory in these letters. There’s nothing scandalous about it, but there’s a reason and a purpose why that story — I mean how does this show up on the front page of the New York Times? There’s nothing newsworthy about it.

She’s got a likability problem, and this story was designed to make her appear thoughtful, educated, brilliant, smart, at age 18, with her own future and her own life, a loving, thoughtful, very serious person. There’s so much behind this. We got into arguments at my place yesterday with people, ‘No, no, no, this is a very, very, very heartwarming story.’ It was fascinating to listen to people who are the targets of the New York Times being totally affected by it. It was fascinating for me to watch this. Let’s see. Speaking of the cleavage story, there wasn’t any cleavage. She shows up with a little plunging neck line on the floor of the Senate. This is after the Breck Girl and everybody starts talking about the fact that he’s more of a woman than she is. How demeaning is this, your husband has to go out on Good Morning America to defend the fact that you’re a woman and doesn’t quite pull it off. (Laughing.) So here comes the cleavage, and then when the cleavage happens, they cry victim; they cry how inappropriate; how horrible; why is the Washington Post doing this? It was so outraged, Ann Lewis sent out a fundraising letter about it, portraying Hillary as the victim.

I’ll tell you, if you really want to outrage Hillary, forget these cleavage stories, just revive that picture that showed up in the LA Times back in the nineties with Clinton and Hillary dancing to no music on a Caribbean beach in their swimwear. You remember that? They wanted us to see that. The picture appeared in the Los Angeles Times. Folks, it was not pretty, and this was two weeks before the Lewinsky story was going to break. This was early 1998, and all of a sudden at the White House press conference that day, McCurry, the White House spokesman, opens up deriding the LA Times for daring to publish the picture. Everybody in the press said, ‘What picture? We haven’t seen the picture.’ So that made sure the picture showed up everywhere. We later learned that they were dancing on the beach where there was no music. The picture was supposedly snapped by paparazzi snooping around unbeknownst to the Clintons. It was all BS. The Secret Service, yeah, whatever. Sabotaging the Clintons, making them victims, which is Hillary’s MO. Something like this happens turns her into a victim and then go raise money off of it. Hilarious.

The Democrats are hyperventilating over all of this. Never has so much been said about so little. The media pretends not to want to discuss Hillary’s cleavage in the process of endlessly talking about it. We have a montage here. We have Howard Kurtz; we have Wolf Blitzer; we have got Mika Brezezinski; we’ve got Amy Argetsinger of the Washington Post; we’ve got Bill Weir. We’ve got everybody that is anybody in the Drive-By Media. Listen to this.

BLITZER: Hillary Clinton’s cleavage, get this — her cleavage.

BREZINSKI: The cleavage controversy, calling Hillary, quote, a tempest in a B cup.

ARGETSINGER: It wasn’t very much cleavage, either. It was not that much at all, was it?

BREZINSKI: No, it wasn’t.

STEPHANOPOULOS: I’m not going to that cleavage story.

ROBACH: Cleavage controversy, I don’t even see much there. That looks like a shadow.

MITCHELL: This was so marginal. This was like microscopic.

RUSH: Exactly right. Folks, I have known cleavages. As a callow and shallow youth, I have ogled cleavages. I will admit this. Yes, it’s true. I’ve even been distracted by cleavages. But let me tell you, this was no cleavage! Washington Post fashion columnist wants to enhance Hillary’s femininity, refers to her cleavage in this case, the C-word. Hillary team seizes on the cleavage and uses it as a fundraiser. Hillary gets two benefits; she gets the femininity benefit and the victim benefit at the same time. Actually three, fundraising; you could say that cleavage leads to a war chest. I don’t believe anything that happens with these people is coincidence, just don’t believe it. Not with Clinton, Inc.

RUSH: We go to Missy in Lafayette, Louisiana. Hi, thanks for calling.

CALLER: Thanks so much for having me, Rush. Cajun dittos to you. 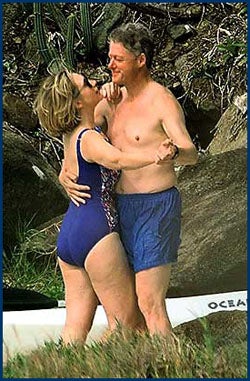 CALLER: Rush, I think you hit the nail on the head with the whole Hillary thing. This is her way to further distinguish herself from Obama and Edwards. It gives her some security back in New York for those who are still remembering and feeling the impact of the assault on our country, and it moves her more central than the kook fringe. She’s positioning herself for the presidential run next fall, absolutely.

RUSH: Well, I did advance this theorem myself. You are calling to echo it. If it’s true, if we’re right about this, and we have to admit here we are just speculating. But if we’re right about this, do you understand what it means? It means that somebody at Clinton, Inc. — don’t think the Drive-Bys came up with this all on their own. This is just too coincidental. There are no coincidences with the Clintons. So if this swerve in Drive-By coverage in the war in Iraq is indeed designed to aid Hillary, then look how fast they turn on a dime, look at it. Of course we hit a puff piece on the front page of the New York Times, it’s not worth discussing in any great detail, other than to discuss the placement, how get there, why have we not heard about this before. It’s the strangest damn story. But it’s designed to appeal to the average New York Times reader and present a picture of Hillary that is not true. Likable. They’re trying to burnish an image for her here: smart, deeply concerned, deeply evolved, and she had a conservative father that drove her out of the house, drove her to Wellesley, drove her to the East Coast, drove her to the arms of Bill Clinton and the liberals. She wanted to go to Africa. What young kid doesn’t want to go to Africa? Big deal. She didn’t go to Africa, because she’s afraid what her dad would say and what kind of conversations they would have. All of these conservatives are mean-spirited SOBs. This is not an accident either. And, by the way, if you’re this guy, she’s never spoken to this guy since they last wrote the letters in 1969. She’s not spoken to him in 38 years.

The New York Times finds out about these letters because Gail Sheehy found out about them for a book that she wrote on Hillary, the New York Times, said, oh, let’s call the guy. Guy says, (paraphrasing) ‘Hi, New York Times. Sure I’ll give you the letters.’ Turns ’em over without calling Hillary first. The story is that Hillary is, ‘Oh, he’s still got those? I’d love to see them, could you make copies, sir, and send them back to me?’ These letters, they’re not intimate. It was not boyfriend-girlfriend. It was just two young college kids writing together. They grew up in the same place in Illinois, Park Ridge I think. It makes no sense, people don’t do this, write a bunch of letters over four or five years and never speak to each other again, even by letter or phone? It shows up in the New York Times now after all these years of Hillary being in public life?

Where I’m leading with all this, if indeed the Drive-Bys have done a 180 here in order to help Hillary because Obama’s coming on too strong, oh, man, I mean, that’s brazen. Not surprising, just brazen. It’s going to be interesting to see what happens the rest of the day, tonight, tomorrow, and what happens with the rest of the Democrats on this. We can’t leave out this New York Times column today. We talked about that in the first hour. Two leftists from the Brookings Institution said, (paraphrasing) ‘Hey, it is going great. We can’t get out of there. It would be foolish to get out of there. What every American must know is this is working and we should stay, at least to the end of 2008.’