Murdoch Will Take on the Times

RUSH: Chris in White Plains, thank you for waiting, and welcome to the EIB Network.

CALLER: First, Rush, congratulations on the most wonderful — at least 15 years I’ve been listening to you — 19 years you’ve been around. Congratulations.

CALLER: And actually, this is a double fantastic day. Besides me getting on to you. Mr. Murdoch, I have heard, won his bid for the Dow Jones, which means that now with the Wall Street Journal in competition, we might be able to kiss the New York Times bye-bye. 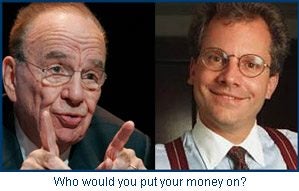 The newsroom had to have the New York Times because the New York Times set the agenda. So Murdoch was making this point. He said that means that there is a whole market out there for a different way to do news and treat news, and he started talk in this interview in 2005 about the Wall Street Journal having the infrastructure in place to do that. So you’re very shrewd, sir. You may know more than you’ve let on because I think one of the objectives that Murdoch has is to take on the New York Times as the paper of record. He’s not going to tamper with the editorial page of the Wall Street Journal. I have no idea what he’s going to do with the rest of the paper. He signed all these agreements with the Bancroft family. But what’s that worth? He owns the paper. You’re not going to buy something and say, ‘I’m not going to run it the way I want to.’ He’s not going to spend $5 billion for that. He’ll give it time. You know, the unions inside the Wall Street Journal are having a cow right now. The New York Times are having a cow. The rest of the Drive-Bys are having a cow. I’ll give you some examples here as the program unfolds, some of the headlines, some of the stories. They’re all worried what he’s going to do to this venerable institution. Oh, no! How will he destroy it? And, of course, if these people were honest, if they really think he’s going to destroy the Journal, they’d be happy, wouldn’t they?

Isn’t the news like any other business? Isn’t it competitive? Aren’t they losing circulation? Aren’t they losing ad dollars? Wouldn’t it be great for them if Murdoch came in and blew it and ran the Wall Street Journal into the ground? That’s what they actually ought to be hoping for. What they’re really afraid of is that he can come in, and this is just another chink in the once-existing monopoly that the left had. They are simply afraid of Rupert Murdoch because he’s conservative for the most part, and he succeeds, and he’s going to be stiff competition. You know, when you have a monopoly, you don’t have to compete. When you have a monopoly, you can do whatever you want. You can sit around and not do anything. You can work two hours a day and do whatever you want to do. When there’s nobody to compete with you, it doesn’t matter. It’s like the government. If the government provides a service, and if they’re the only one that does, like they want to be with health care, like the Democrats do, where else are you going to go? When you have to stand in line, when you have to pay whatever they charge (even though it’s ‘free’) where else are you going to go, if there’s no alternative? Same thing with the news business.

If you’ve got a monopoly, everything’s cool, take your time. Take sure the Republicans never have more than 150 members in the House of Representatives. Give them a president now and then, but you can still manage them. All those days are gone now, and liberals from the Drive-By Media all the way into the hallowed halls of Congress and state legislatures are still atwitter over what’s happened. Now, this Murdoch purchase of the Wall Street Journal with what I think is going to be a concerted attempt to replace the New York Times as the paper of record. By the way, he also acknowledged it’s going to be expensive. He’s going to have to have worldwide bureaus, journalists all over the world to pull this off. But I think he’s got a grandiose idea. Plus he’s got a new business channel starting on cable, Fox Business Channel, and he’s going to brand that with the Wall Street Journal. They have a twelve-year exclusive deal CNBC, but hell, anything can be broken with enough money, or partner up with them. You know, what the hell? CNBC is going to be the primary competition of the Fox business channel. It’s exciting and the Drive-Bys are all atwitter.

RUSH: Is it not funny to look at the Drive-By Media reaction to Rupert Murdoch’s purchase of the Wall Street Journal? You got liberal members of the Bancroft trust quit in disgust. Washington Post, front page headline: ‘Murdoch Seizes Wall St. Journal In $5 Billion Coup.’ Let’s see. New York Times: ‘Dow Jones Deal Gives Murdoch a Coveted Prize.’ The Daily News: ‘Rupe Takes the Prize. Wall Street Journal Owner Selling Out to Peddler of Post.’ (Laughing) The journalists at the Journal are demanding assurances. Assurances of what? The union will say, ‘Well, we’re going to make sure that we get fair contracts here and union bargaining and so forth.’ The Times also said that ‘the deal gives a larger voice in national affairs to an owner whose properties often mirror his own conservative politics.’ As though the New York Times doesn’t mirror the politics of that Little Pinch who runs the place now? They’re just beside themselves. But as I pointed out earlier, if they really think Murdoch is going to destroy the paper in a competitive world, they would be happy about that, wouldn’t they? They’d be happy about it. New York Times, all these other papers, dropping circulation, dropping ad revenue. If they think Murdoch is going to destroy the thing, then fine, they should be happy about that. What it is, folks, is it’s just more evidence that their monopoly is histoire, he’s conservative, the Drive-Bys are liberal, and they are beside themselves.

RUSH: We go to Earlysville, Virginia, and this is Jackie.

CALLER: Hi, Rush, dittos and congratulations on your 19 years.

RUSH: Thank you. Thanks very much.

CALLER: But I think you have a little way to go. My father worked for Dow Jones and the Wall Street Journal for 60 years.

CALLER: Well, he started out as a messenger for the Journal. He delivered news items and so forth down to the various people around Wall Street, and when he retired in 1987, he was the executive editor of the Dow Jones News services.

CALLER: He did not graduate from high school, but he knew he could do it.

CALLER: Tremendous story. And I have something else to tell you, though. He hated journalists, and he loved reporters. Journalists, he felt, were the elites, and the reporters reported the facts and they left the opinions out. And he couldn’t stand the people who came out of journalism schools. He said I don’t want any journalists working for me. I want reporters. And he was really suspicious about years ago, or not too many years ago when the Bancrofts took over —

CALLER: Yeah, but I think there was some kind of a management change within there, and they started adding all the frills to the paper, they became almost like a USA Today.

RUSH: Oh, you mean like what they’re going to could you see Murdoch of doing?

CALLER: Probably, but worse, I guess. Yeah. Anyway, he’s probably rolling in his grave right now because they’ve added the front page ad and all these five sections and all this color, and he just wanted news. He wanted to report the news to the people. He did like the Post. He thought they were editorially honest —

RUSH: Which, the New York Post? And, let’s see, I knew there was something else. Keep up the good work. I am a student at the EIB Institute. I live in Earlysville which is in Albemarle County in Virginia, and this is where Charlottesville is. I am just steeped in liberalism —

RUSH: You are surrounded.

CALLER: Oh, it’s awful. But I always introduce myself as being a little to the right of Attila the Hun.

CALLER: And that kind of ends the conversation right there.

RUSH: Well, that’s great to know that you’re in the audience. And thanks so much. It’s a great, great story about your dad. All businesses change. Everything changes. Some people resist it because of tradition. Others resist it because change is new, and new is hard. But everything has to change. The old gray lady started printing pictures in color, and then they’ve all migrated to the Internet now. So your dad was a traditionalist and a holdout, but at some point everything is going to be reworked, redesigned, because there’s competition, and the American public change, and that’s the reason people who do business with the American public have to try to stay at least where the public is, or maybe if they’re fortunate, a step ahead.