RUSH: The Crazy World of Arthur Brown. It hit the top of the charts in 1968. I used to play that song as a struggling, young disc jockey, star-of-the-future, in my second year in broadcasting, 1968 back in Cape Girardeau, Missouri. Okay, Global Warming Update time. Some doozies today in the stack. First off, I know. I’ve been pummeled with e-mails from people who happened to see Newt Gingrich and John Kerry (who served in Vietnam), and their so-called debate on global warming yesterday. It was on C-SPAN. When I first heard that this was going to happen, I said, ‘Well, it’s about time,’ and I hate saying this (you have to understand, I hate saying this), but something happens to Newt when he gets up there face-to-face with these libs. It’s like make nice. It’s like kiss up. It’s almost like he gets star-struck in front of these people. Remember his joint press conference with Hillary on health care? He was on the program after that, and I told him I was a little incredulous at that. He said, ‘Well, forget partisanship. A good idea is a good idea.’

I said, ‘Well, that’s the problem. I’m not sure,’ but Kerry? He’s a sitting duck! It’s sitting duck time, and to sit there and agree with the notion that we’re in a crisis because of humanity, is to just (sigh) ignore the central political theme of this whole issue. So, like you, I was sad. It was just very sad. That’s about the best way I can characterize this. Now, one of the things during the entire effort of mine here to educate as many people as possible on the real truth of the political movement of global warming, has been to tell you that what this is all aimed at is you and your lifestyle and the entire American lifestyle, and by extension, the lifestyles of Western democracies in general, but the focus is on us. ‘We’re the bad guys. It is our excessive consumerism. It is our attempt to drive bigger cars that is the problem,’ they say, and that becomes the target. We’re supposed to roll back our lifestyles. We’re supposed to have less expectations for the future, because our actions as human beings — using our brains as God created to create longer life spans and a better standard and quality of life — has become the focus and target.

I’ve told you this over and over again. Looky here, from the UK Guardian: ‘Stop Shopping…Or The Planet Will Go Pop — In the week that saw Primark mania, Jonathon Porritt, the government’s green guru, says consumerism is now a lethal disease. ‘Many big ideas have struggled over the centuries to dominate the planet,’ begins the argument by Jonathon Porritt, government adviser and all-round environmental guru. ‘Fascism. Communism. Democracy. Religion.’ He lumps them all together. He’s a lib! Fascism. Communism. . Religion. These are the primary ills and evils of the world! ‘But only one has achieved total supremacy. Its compulsive attractions rob its followers of reason and good sense. It has created unsustainable inequalities and threatened to tear apart the very fabric of our society. More powerful than any cause or even religion, it has reached into every corner of the globe. It is consumerism.’ According to Porritt, the most senior adviser to the government on sustainability, we have become a generation of shopaholics. We are bombarded by advertising from every medium which persuades us that the more we consume, the better our lives will be.

‘Shopping is equated with fun, fulfillment and self-identity. It is also, Porritt warns, killing [killing!] the planet. He argues, in an interview with The Observer, that merely switching to ‘ethical’ shopping is not enough. We must shop less.’ This guy better watch out; he is going to lose female support here. The men will love it if he keeps this up. It’s what he says. He said, ‘Ethical shopping is not enough,’ meaning, buying Priuses and compact fluorescents. We gotta stop buying everything. We gotta stop buying all things. We gotta shop less! You think women want to hear that? Men might. H.R. is going to use that on Theresa tonight. ‘Hey, Theresa, your shopping is destroying the planet.’ Actually, turn this around and use it. All of a sudden, all of us deniers, all of us skeptics go home and tell our wives, our spouses. I, of course, have neither, but you can do it for me. You can go home, and you can say, ‘Honey, I just read the most amazing thing. I heard it on the Rush Limbaugh show today and he cited the source. It’s The Guardian in the UK. We gotta stop shopping. Shopping is killing the planet!’

Go tell all these parents that are watching Algore’s movie and coming home, ‘Oh, my God we’re killing the polar bears!’ Tell them, ‘No, it’s the shopping that’s killing the polar bears. We have to stop shopping!’ It’s what the guy is saying here. ‘There are, however, a growing number of dissenting voices such as the so-called ‘Froogles’, individuals who use the internet to seek a simpler lifestyle, and organisations and websites which urge people to kick the retail habit. Porritt, chairman of the government’s Sustainable Development Commission, has concluded that consumerism is central to the threat facing the planet, cannibalising its natural resources and producing the carbon dioxide emissions which result in climate change…. ‘I think capitalism is patently unable to go on growing the size of the consumer economy for any more people in the world today because levels of consumption are already undermining life support systems on which we depend – so if we do it for any more people, the planet will go pop,’ Porritt told The Observer.’

So, okay. Keep the poor, poor; make the rich as poor as possible, and save the planet. Now, Paul Ehrlich tried this and he is still a guru even though every projection and prediction he made was deemed to be wrong. The Population Bomb? He made the bet with Julian Simon. Julian Simon said, I’ll make you a bet that by the year 2000 or whatever his apocalyptic year was, we’ve got more of the following minerals blah, blah, blah, than we have today. Ehrlich said, ‘I’ll take that. I’m going to skunk you,’ and of course Ehrlich was dead wrong. We had more of everything. We had more abundance. We had cheaper prices on a number of things (factored for inflation, of course), and the reason was the good old supply and demand. When there’s demand, people are going to go out and supply it. (interruption) Yes, Mr. Snerdley, what’s the…? (interruption) Well, we’re not… (sigh) Snerdley’s question is, ‘How is society supposed to function if people don’t buy what they need?’ He’s not advocating the total end of shopping, but look, you’re asking me to analyze some guy rationally. This is a kook!

The point is, this is kooky but it’s being passed off as brilliance. It’s being passed off as insightful. It’s being passed off as enlightened — and it’s going to attract its fellow kooks here. So first they take away our big cars, then they’re going to take away the lightbulbs and we gotta get these little screwy things, then our plastic bags. LA is going to get rid of plastic bags in grocery stores. Then they’re going to get rid of hair spray, which they tried to do with the aerosol spray can. Now they want us to stop consumin’ or we all die. I’m telling you, folks, the environmental movement is the new home of displaced communists and their attack is on capitalism, pure and simple, if you just listen to them. You have to trust me. Meanwhile, ‘The groundhog’s prediction for an early spring is proving wrong in New York City. A cold front has kept temperatures about seven degrees below the historical average this month. Just ten days into April temperatures have averaged 42 degrees.

‘That’s about a degree warmer than the average for April of 1874 which was the coldest on record.’ So the bottom line is that New York temperatures rival the record for the coldest April since records have been taken, 1874. Baseball games are cancelled. You have a snowstorm in the upper Midwest today. It’s got all kinds of airports bogged down, Chicago O’Hare and others. Major League Baseball, having to cancel even more games. The Cleveland Indians moving games to Milwaukee where they’ve got a retractable roof there, so they can play the Los Angeles Angels. This is normal stuff. Snowstorms in April happen. 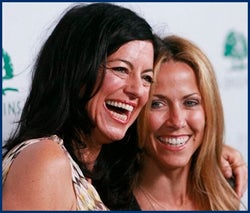 But the pi&egrave;ce de r&eacute;sistance today, ‘Sheryl Crow and Laurie David in a biodiesel bus traveling the country to raise consciousness on global warming,’ and there are numerous stories out there with quotes like this. This is Sheryl Crow speaking. ”Laurie and I just met in November and now we’re sleeping together,’ she said with a laugh. ‘Yeah, we’re sleeping on a bus in separate bunks.’ On a more serious note she told People magazine, ‘When I learned how serious global warming is, I wanted to do something to help.

”So when Laurie and I were talking about what we could do, well, my answer to everything is to get on the bus and take it to the people, in the true troubadour fashion,’ but what was she doing to be ecofriendly? ‘Well, I try to wash my clothes in cold water as much as I can. I turn off lights in rooms that I’m not using. I drive a hybrid. I’m getting solar panels for my house. To save water, I’m going to going to shower once a week,’ she joked, ‘like I did when I was a kid, on Saturdays.’ She also had her tour bus retrofitted to use ecofriendly biodiesel fuel. ‘We’re in a bus powered by vegetable oil so we’re craving french fries the whole tour.” It’s like Hillary’s bus tour for education, except Laurie David and Sheryl Crow in a bus tour across the country to (sigh) raise consciousness about global warming. The tour began at southern Methodist University in Dallas. (interruption) Yeah, I know it snowed the day before they got there. Snowing! (laughing) It’s a joke, except these people are treated as heroines. These people are treated as Paul Reveres. They’re riding across the country, and they’re sounding the warning, ‘The British are coming! Global warming is coming, and it’s going to kill us.’

I’m trying to warn everybody the best I can.