Ladies and gentlemen, I want to go back to yesterday’s big program and revisit a sound bite by New York Senator Chuck Schumer on the floor of the Senate. This was Wednesday.

SCHUMER: Let me be clear. The violence in Anbar has gone down despite the surge, not because of the surge. The inability of American soldiers to protect these tribes from Al-Qaeda said to these tribes, ‘We have to fight Al-Qaeda ourselves.’ It wasn’t that the surge brought peace here. It was that the warlords took peace here, created a temporary peace here.

RUSH: Exactly right. It was exactly what the program from the outset was, get the Iraqis to stand up, protect themselves. They couldn’t have done it without us, just clearly outrageous, aiding and abetting the enemy. This is just typical of the Democrats today. So they went yesterday on CNN, Wolf Blitzed asked the Breck Girl, who, by the way, has never been to Iraq. He’s never been to Iraq. I know why. Can you imagine the effect of the climate there on his hair? He’ll send his wife before he goes. At any rate, he was on with Wolf Blitzer yesterday: ‘Chuck Schumer said something yesterday that’s causing some controversy. I wonder if you agree with him that it wasn’t necessarily the US military that turned things around over there, it was the warlords, Sunni tribal sheik leaders who have turned things around on their own without the United States military?’ 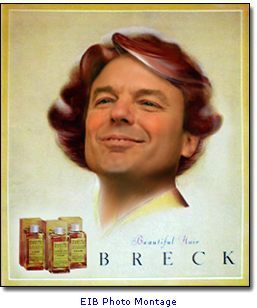 EDWARDS: I think a fair assessment would say it’s both. I think the American military certainly made a difference there, but they were working in conjunction with the Sunni tribal leadership who made a determination that they needed to do something to stop Al-Qaeda, that Al-Qaeda was a bigger threat than the American presence, and so they began to cooperate with us.

RUSH: Did you hear that? The Sunni tribal leaders and the warlords, according to the Breck Girl, concluded that Al-Qaeda was a bigger threat than the American presence. ‘It’s a fair assessment, I would say it’s both,’ the Breck Girl said. So here you have Schumer and here you have Edwards. You know, one thing that we learned yesterday — or actually last night we learned this — Chuck Schumer has his own history lesson, his own way of teaching history. You can buy it.

(Playing We Hate the USA.)

You are tuned to the EIB Network. I am El Rushbo speaking over my own song so that competitors cannot steal my song and play it as their own.