RUSH: Anyway, we had the news yesterday that the Breck girl had purchased time, two minutes of time, on PMSNBC in order to reply to the president’s speech. Now, I thought that they would run the Breck Girl’s response right after Bush’s speech, but, no, they ran a rant response by Rhode Island Senator Jack Reed, and then after that they did their roundtable discussions. They had Matthews on there, and they had Howard Fineman on there, and they had Tim Russert on there. Then they went and talked to Joe Biden and asked him what he thought, and they went to Mike Huckabee, a Republican, asked him what he thought. It must have been 30 minutes after Bush finished that they finally got to the Breck Girl. The Breck Girl is the only guy to pay, and they just ran it as a commercial. They didn’t set it up: ‘Now, for a candidate response to President Bush’s speech, here’s the Breck Girl.’ They didn’t do that. They just ran it as a commercial at a commercial break, and after the Breck Girl’s response, they ran the obligatory: ‘I’m John Edwards, I approve of this message.’ It was a hoot. So he paid for all this time and he needn’t have paid for any of it because they’re interviewing all these other people long before they got to his commercial. Would you like to hear what the Breck Girl said? Because I know nobody watched it. So here’s just a portion of his response.

EDWARDS: The question of Iraq is separate from September 11th, as it always has been, whatever George Bush would have us believe. Likewise, supporting our troops and pursuing a failed war are not the same things, whatever George Bush would have us believe. Our troops are stuck between a president without a plan to succeed and a Congress without the courage to bring them home. But Congress must answer to the American people. Tell Congress you know the truth. Congress needs to tell him he only gets one choice: a firm timeline for withdrawal. No timeline, no funding, no excuses. It is time to end this war. I’m John Edwards, and I approve this message.

RUSH: Meanwhile, we have sound bites for you throughout the program today from Democrats who are just beside themselves. They know they can’t do anything to stop this, and Bush last night: ‘We’re going to be in there ten years,’ and they are beside themselves. Bush said we’re going to have permanent bases. Bush said we’re going to have a relationship with them. I remember all these liberal Democrats were complaining and whining that Bush wasn’t exercising diplomacy. Now Bush talked last night about essentially using diplomacy and they’re just out of their gourds over this, because they got skunked.

RUSH: We mentioned the first hour how the Breck Girl, John Edwards, got screwed by MSNBC. They charged him who-knows-what to run his little response to President Bush’s speech. They waited 30 minutes to air it, and in those 30 minutes they interviewed a bunch of other presidential candidates for their opinions on this, but charged the Breck Girl. Anyway, it has been learned here — this is from the New York Post — that Edwards ‘has invested a big chunk of his personal fortune in a hedge fund tied to subprime lenders foreclosing on the homes of dozens of New Yorkers, The Post has learned. The 64 homes are scattered across suburban Nassau, Suffolk, Rockland and Putnam counties, according to court records. The families either have been kicked out of their homes for failure to keep up with mortgage payments or are still fighting foreclosure proceedings in court. Edwards, who,’ as you all remember, ‘last December formally launched his populist Democratic campaign in New Orleans, promised last month to pull his money out of any fund linked to foreclosures in the flood-ravaged city. His promise came after The Wall Street Journal reported that [these were] subprime lenders tied to Fortress Investment Group,’ which is the place he went to work, because he said he wanted to ‘learn about to poverty.’

He went to a hedge fund because he wanted to ‘learn about poverty,’ and, of course, what he learned about poverty was he didn’t like it, and he didn’t want it for himself. That group, the hedge fund that he went to work for, was ‘suing 34 New Orleans homeowners in foreclosure proceedings. Edwards invested a $16 million of his estimated $30 million fortune in Fortress, which has subsidiaries that offered subprime loans. ‘I will not have my family’s money involved in these firms that are foreclosing on people in New Orleans,’ he said.’ Well, now they’re foreclosing on people in New York! ‘Helping down-on-their-luck New Yorkers would be comparatively easy, however, because their names and addresses are readily available in public court records.’ So, again, the question that I, as your host, have about this is, once again: ‘Why is this man still viable?’ He’s running an anti-poverty campaign, and we know that poverty is improving in this country. It’s getting better, and it’s not bad in the first place, given poverty around the world. I just don’t understand it. There’s nothing that recommends this man. I don’t understand. Frankly, to be quite honest with you, I don’t understand what recommends any of these Democrat candidates as something special, something that makes them people who are super-qualified. None of them are the Brainiacs. Look, folks, who among them knows military strategy better than a four-star general? Yet they think they do!

They ought to be the ones determining military strategy? They think they’re the ones that ought to be determining health care policy, not professionals in that business? They think they ought to be determining energy policy? They’re not in that business. They think they ought to be determining retail policy, as in, ‘We gotta get Wal-Mart!’ They’re not in that business. They claim to have all these superior qualifications. They know better than anybody else, and I want to know where the proof is, or as Lanny Davis would say, ‘The puuf.’ Where’s the proof? What have these people done to recommend them as great military strategerists or anything else? They’re nothing but a bunch of big government liberals who want to control people’s lives! What they do is create in the minds of as many Americans as possible that all these other large enemies are screwing the hell out of them every day, cheating them and ripping them off and all this, and the Democrats are going to go in there and they’re going to make it fair and they’re going to make it right, and going to tell these people how to treat people. Of course, these people that have been lied to and exposed to all this class envy ever since FDR and the Raw Deal are out there going, ‘Yeah! Yeah! Yeah! You get even with them. That will make me feel better. Yeah, yeah!’ It’s a never-ending and repeating cycle. But you get past that, that’s the politics of it — just what is it that recommends these people to be experts in anything other than screwing up the country? They’ve shown they can do that. They’ve shown that they can screw up the government. They’ve shown that they can screw up the military. Yet nobody questions their expertise. Nobody questions their qualifications. 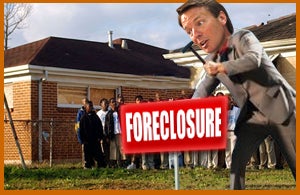 RUSH: Well, it’s more bad news out there for the Breck Girl, ladies and gentlemen. This is from The State newspaper out of Columbia, South Carolina. This is last Sunday, September the 9th, when this was published. We just now found it, and if we just now found it, it means it did not escape South Carolina, which means the Drive-Bys weren’t interested. ‘A subprime lender with ties to Democratic presidential hopeful John Edwards has moved to foreclose on more than 130 homes in South Carolina since the S.C. native went to work for its parent company, an analysis of courthouse records shows.’ So the Breck Girl’s investment firm is foreclosing on people in New Orleans, 64 people out on Long Island, and now 130 homeowners in South Carolina. ‘The lender, Green Tree Financial, also was once the subject of a $30 million class-action verdict involving thousands of South Carolinians. Edwards’s ties to the company are disquieting to some supporters of the North Carolinian. On the campaign trail, Edwards has insisted he is the champion of lower-income families. Edwards’s ties to Green Tree also could hurt him with voters in South Carolina, a state he must win if he hopes to win the 2008 Democratic nomination.

”I hate to hear that,’ Sue Berkowitz, an Edwards supporter, said of his relationship to Green Tree. ‘I just hate to hear that. ‘They’re horrible, disgusting, slimy,’ Berkowitz said of Green Tree, which says it is the nation’s largest lender for manufactured housing purchases. ‘From October 2005 through 2006, Edwards worked for Fortress Investment Group, a hedge fund. Its subprime lending subsidiaries, Green Tree Financial and Nationstar, foreclosed on 34 homes owned by victims of Hurricane Katrina,’ now 64 homes in Long Island and New York, and 130 in South Carolina. There is a child in every one of those houses, I would bet. You would guess that there would be a child, and maybe more than one in some houses. Maybe in some there are no children. I’ll tell you, he must have learned a lot about poverty. He went to work for Fortress because he said he wanted to ‘learn about poverty.’ Imagine that. Man, oh, man! Can you imagine if this were a Republican who were out there campaigning on the same themes as the Breck Girl is and all of this information was forthcoming? This was from last Sunday in Columbia, South Carolina. (interruption) Well, if there are illegal immigrants in those houses, they know where to go. Well, the people in those houses whoever they are — legal, illegal, from Mars — it doesn’t matter to me. They have nowhere to go.

Well, if they’re from Mars, I imagine they could find a way back, you know, if they got here in the first place.