The Greatest Audience in the History of Media

RUSH: Get this, folks: ”Car-Buying Spurs Retail Sales Rebound.’ Retail sales posted a modest gain in August, helped by the biggest jump in auto sales in more than a year. But there are concerns that spending could falter as the steep slump in housing and financial market turbulence weigh on consumer confidence.’ Of course, they had to add that last sentence because they cannot permit there to be a conclusion if there’s good news out there. Now, why is all of a sudden car buying going through the roof? How come people are buying cars? It is this program, ladies and gentlemen. 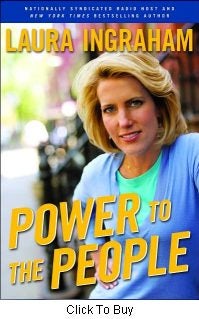 Oh, by the way, I want to thank you people. I should have started the program with this. You people are the greatest audience in the history of media, and I mean this from the bottom of my beating and sizable heart. Yesterday, I gave a little plug to Laura Ingraham’s book, Power to the People. At about ten-after-one, ten after the second hour when it started, they didn’t know this at the time, but at the time her book was number 61 on the Amazon nonfiction list. By five o’clock yesterday afternoon, it was number one. And today, it’s number one overall, nonfiction and fiction. It is ahead of Clinton’s book. It’s ahead of the O.J. book that’s out there. And you people did that. You are the most fantastic audience in all of media. I admit it, yes, I suggested that you get it and read it, but you did. This was just an amazing thing. I got an e-mail flash from a friend, ‘Have you seen where Laura’s book is?’ ‘No, I’m working on tomorrow’s show.’ So I went and looked quick on the link, it was number two at like four o’clock yesterday afternoon, an hour after the program. I thought, ‘Well, that’s not bad, number 61 to number two.’ Then at five o’clock I clicked, they update it every hour, it had become number one. That’s just great for her, and it’s great. We all gotta hang here together, folks, ’08 is important, and this book has some timely information, inspirational things in it. It really, as I said yesterday, is well worth your checking out.

But I really wanted to thank you from the bottom of my heart. That is just amazing what you people do, and it’s happening with General Motors. General Motors is a sponsor here and their sales are going up. Look, I don’t want to tell the story in great detail, but for 19 years we’ve been trying to get a major auto deal, and they had their advertising plans and they didn’t want to interrupt them, and finally we came up with a plan for them — I’m not going to give away the secret — but we came up with a plan that made it feasible for them, not involving money. We gave them a strategery. So GM sales, auto sales going up, which is fabulous, and I really don’t want to gush here too much, but I just can’t tell you what I think of you all. You just blow me away. You are literally just amazing, and I thank you from the bottom of my heart.