RUSH: Tracy in Beverly Hills, Michigan, you’re next on the EIB Network. Hello.

CALLER: I’m calling because I kind of got sucked in a little bit last night watching the Emmys, and —

RUSH: You’re the one?

CALLER: Yeah, there were 36 of us. I was one of them. I just recall hearing about a creative Emmys broadcast, well, not even a broadcast, but a presentation of awards a week ago for technical Emmys, behind the scenes stuff, animations, and reality awards, other programming, and kind of boring stuff, stuff that wouldn’t really interest us as much as best actor or best actress.

RUSH: Well, according to this, the ratings were down 20% last night compared to last year. The New England Patriots and the San Diego chargers creamed the Emmys.

CALLER: Is that so?

RUSH: Yeah. I wouldn’t make it up.

CALLER: Well, the lead-in to the Emmys was the Detroit Lions, and they won, but maybe —

RUSH: I was watching that game. I don’t know who the announcers were because I was switching back and forth to that game and the Raiders and the Broncos, the Cheap and the Chicago Bears, and the Fish and the Dallas Cowgirls — Cowboys. Somebody was calling them the Cowgirls yesterday. I happened to be zooming past the Lions game when they went into overtime. Whoever the announcer was, I thought it was one of the funniest lines, ‘Well, I guess neither the Lions nor the Vikings are interested in watching the Emmys tonight.’

CALLER: Exactly. I thought that line was hilarious.

RUSH: It was, and I guess Fox had the Emmys, and that was just their way of promoting them, but the Emmys didn’t draw that well last night.

CALLER: No, they didn’t, but just as far as the Lions go, I think we’re all hoping that Kit knows the real deal here. But okay, back to my point. So the creative Emmys were last week, and they’re going through their Emmys, in pretty good fashion last night, I thought, and then they go to a category that’s entitled creative achievement in interactive television.

RUSH: Okay, hang on right there, because I interrupted you during this call. This is not your fault. This diarrhea of the mouth episode is the fault of the host.

RUSH: We’re back at Tracy, Beverly Hills, Michigan. You’re talking about the Emmys that nobody watched.

CALLER: So I’ll jus recap. Okay. So they are going through some awards like Best Actress in a Sitcom; Best Actor in a Sitcom; some writing stuff; some director stuff, and then they come to the Creative Achievement in Interactive Television, and a gentleman — I can’t recall who the creator of MySpace is, but they go to him, and he presents Al Gore with the award for Creative Achievement in Interactive Television for Current TV, his ‘youth-oriented’ television channel.

RUSH: Right, which nobody really watches.

CALLER: I… Honestly, you know, I’m fairly… I don’t know. I know a little bit of my way around the Internet here, and quite honestly, I’ve heard a little bit about it a few years ago, but it’s not even on the map, and I just thought, this is just such a —

RUSH: No, no, no, no. But, you see, liberals are awarded for their ‘good intentions,’ not their ‘results.’

CALLER: Okay. And that may be true. But I just thought, you know, this is another opportunity to march this guy out there in order to exercise their agenda.

RUSH: Tracy? Tracy! It’s exactly right. Look, here’s the drill. Algore does a global warming movie. He does not win the Oscar for it. Other people win the Oscar.

CALLER: No! But he walks on stage! He wasn’t even supposed to!

RUSH: He walks on stage and so the Drive-Bys, in their idiocy, think he won an Oscar.

RUSH: So they think he won an Oscar. Now they think, last night, he won an Emmy, which he did. Now it’s on to the Nobel Peace Prize.

CALLER: No, now we’re back at the Oscars. But it was the same thing because he got a standing ovation.

RUSH: What do you expect you’re going to see when you turn on this stuff, Tracy? I’m shocked at you.

CALLER: Well, here is the thing that bugs me. Gosh — I mean, don’t… (huffing) They have the Creative and Technical Emmy’s last week, and they couldn’t, you know, just kind of present this there?

RUSH: No! They’re not going to bury Algore in the Technical Emmys that they do from some alley studio on Saturday night with still cameras. No! You know what the drill is here. This is on to the Nobel Peace Prize.

RUSH: Speaking of the Emmys last night, ladies and gentlemen, this was Sally Field when she made her acceptance speech. I guess she won the Emmy for lead actress in a drama series for something called Brothers and Sisters, and here’s a portion of her remarks. 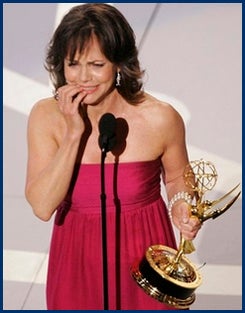 FIELD: And to especially the mothers who stand with an open heart and wait, wait for their children to come home, from danger, from harm’s way and from war. (Applause.) Hurry up! Quiet! I have to finish talking. I — to those — and to war — that — oh, God, forgot what I was going to say. Uh, uh, uh — um — and to war. I am proud — I am proud to be one of those women, and let’s face it, if the mothers ruled the world, there would be no (God-bleep) war. Thank you so much. (Applause.)

RUSH: Well, well, well, Sally Field who first embarrassed herself at the Oscars, ‘You love me, you really love me, don’t you?’ has now come out amidst all the stuttering, and losing her place, and screeching to the audience to shut up so she could finish, has essentially said if mothers ruled the world there would be no blank, blank war. Has she forgotten Margaret Thatcher? Has she forgotten Golda Meir? Has she forgotten Indira Gandhi? Has she forgotten the Amazons? The Amazon babes, we named a division in the US Army after them, the All-American First Cavalry Amazon Battalion. Does somebody want to tell me Mrs. Clinton doesn’t start wars? Mrs. Clinton has started more wars from the time she’s been in Washington than anybody I can remember.

RUSH: This is Freda in Los Angeles. Hi, Freda. Thanks for calling.

CALLER: Hello. Hi. Regarding Sally Field’s comment, we also have to remind Sally Field that also mothers are raising the suicide bombers in Gaza, in Chechnya, and in Iran. So not all mothers… This does not hold for all mothers.

RUSH: That is an excellent point. That’s an excellent point. It is rare that a caller comes up with something that I haven’t, but you did. All of these jihadist mothers who are raising their little kids to be bombs? Absolutely right. Well, Sally Field, it’s a shame. Well, it is. It’s just (sigh). You have to, though, give her credit. She knows she’s an idiot, and she is willing to go on national TV and prove it, and that kind of courage, ladies and gentlemen, is rare in our society.