RUSH: Moving on to Mrs. Clinton announcing her big health care plan today in Iowa, here’s the AP take on this: ‘For months…’ — pant, pant (panting) ‘…Democratic presidential candidate Hillary Rodham Clinton has promised a plan to bring health care to every American. She was to make good on that pledge Monday, unveiling a sweeping proposal requiring everyone to carry health insurance and offering federal subsidies to help reduce the cost of coverage. With a price tag of about $110 billion per year…’ Oh, give me a break. We spend 600 billion dollars a year on 40-some-odd or more poverty programs, $110 billion a year for health care for everybody in this country? Cut me some slack here, folks, but this simply is not possible.

She’s named this scheme, American Health Choices Plan. ‘It represents her first major effort to achieve universal health coverage since 1994, when the plan she authored during her husband’s first term collapsed. … Aides said Clinton will propose several specific measures to pay for her plan, including an end to some of the Bush-era tax cuts for people making more than $250,000 per year.’ There’s going to be a lot more to it than that. In fact, there’s a fascinating editorial — I was kind of stunned to see this — a fascinating editorial today in the Rocky Mountain News. Its headline is: ‘A Sick Way to Save.’ The upshot of their little editorial here is that the only way a single-payer plan can contain costs is to deny service to some people. Apparently there are four proposals in Colorado submitted to the Colorado Blue Ribbon Commission for Health Care Reform. Did they actually name it that? Yes. They actually named a blue ribbon commission the Blue Ribbon Commission. ‘Of the four original proposals submitted to the Colorado Blue Ribbon Commission for Health Care Reform, only one would reportedly cost less than the system we now have: the single-payer plan.’ Now, that ought to get your antenna up because that’s economically impossible.

‘An economic forecast by The Lewin Group, a consulting firm hired by the commission, concluded that had the single-payer proposal been in effect, Coloradans would have spent about 4.7 percent less for medical services this year. At a legislative briefing Wednesday, Sen. Ken Gordon, D-Denver, suggested that this finding all but settled the matter – the single-payer program is the best way to both expand coverage to the estimated 770,000 Coloradans who are uninsured.’ All right, here we get a number. I want proof of this. Who are these people? I want to see where in the heck that number came from, and I want to know how they’re breaking it down. How many of those 770,000, if we accept the number, actively choose not to have it because they’re young and they want to spend their money on something else? It’s their business, right? But not so fast, says the Rocky Mountain News editorial. ‘The commission will host public hearings in each U.S. House district in October, and won’t present its recommendations to the legislature until January — when lawmakers will consider asking voters to adopt one of the proposals in the form of a ballot initiative next fall.’ Okay, so the proponents have four choices. They’ve already said, ‘Hey, single payer is the only one that comes in less than what we’re paying today, single payer.’ You don’t pay, somebody else pays, you get coverage. You think this thing doesn’t have the heads-up lead right now of these four?

But the Rocky Mountain News says: ‘We’ve spelled out some of our objections to the single-payer plan in an earlier editorial, and we haven’t changed our minds. But let’s assume that this system indeed guaranteed medical coverage for every resident. And that its 15-member governing board, which will have ‘constitutional powers to contain costs’…’ Do you realize, constitutional powers to contain costs? ‘Let’s assume that this single-payer plan actually did keep overall medical spending in check. Such fiscal discipline would come with an unacceptable price: dramatic compromises in the breadth and quality of care. Say the plan initially reduced overall medical expenses by the 11 percent Lewin suggests, by wringing out administrative inefficiencies and purchasing prescription drugs in bulk. After that, however, new costs pile up in a hurry. For one thing, single payer would immediately increase the number of Coloradans with guaranteed coverage by 19 percent.’ Are you losing me on this, Mr. Snerdley? You lost me the other day. You thought that I was reading a story written by Melinda Gates, and it wasn’t.

What you are missing here? Well, I’m getting to the bottom line, is that you have the single payer proponents. Tying this to Mrs. Clinton, she’s a single payer advocate. The government’s going to be the single payer. It’s going to be socialized medicine, national health care in Colorado, they’re doing this, they’re proposing four different ballot initiatives, and the people on the side of single payer out there obviously have a leg up because they’re out there with all these stats saying, ‘Hey, it would have cost 4.7 less this year if we’d had had single payer.’ What this editorial is trying to say is, ‘Nope, it’s going to add costs right off the bat,’ because, in the first place, bureaucracies never become efficient; they’re never going to get rid of administrative costs; they’re never going to reduce them. That’s not the purpose of bureaucracies. It’s to increase those things. That’s how the people that work in the bureaucracy get paid. The bureaucrats are not going to sit there and say, ‘You know what, there’s too much fraud in our salaries and too much fraud in our expense accounts, and there’s too much fraud in our heating and air-conditioning here in the building. Well, we’re going to cut back on this.’ Fat chance, folks. Not going to happen.

These costs always go up. When you’re in charge of what you get paid, and you have constitutional powers, what’s going to happen? But there are 770,000 Coloradans without health insurance. You go to a single payer plan, bammo, the number of participants in the plan goes up 19%. No way you can cut costs unless you reduce services. The Rocky Mountain News is making this point, and I wanted to relate this to Mrs. Clinton today because she’s out there proposing essentially a single payer health care plan. The idea she can do it for $110 billion a year to insure everybody in this country — we go 43 million people uninsured, right? That’s another they keep bandying about. Well, the minute this plan becomes law, they’re all insured. That’s not going to happen for free. You can’t do this for $110 billion a year, and wouldn’t you know that we spend 600 billion a year on poverty programs. Imagine what this thing is going to become.

Anyway, this is going to be a long process to slap this thing down again, it’s going to take over a year to do this, getting started. It’s going to run all the way through the election. Slapping it down is going to be the equivalent of making sure that she doesn’t win the White House, and that’s going to take a long time. But there’s a companion story here for this from the American Prospect. That’s a lib bunch, folks. The Hillarycare Mythology, written by a Clinton health care advisor named Paul Starr. ‘Did Hillary doom health reform in 1993? It’s time to get the facts straight about the Clinton plan and why compromise failed. Here’s the real story, from the Prospect co-editor who was a White House senior health policy advisor at the time.’ And what he says in this rather lengthy piece is that the Hillary plan, the details of it and all that, was done without her. Bill did it. Bill put it all together and let her chair the effort. This explains a lot of things about her testimony before committees. She didn’t know anything. She’s up there spearheading it. This is the price for looking the other way with the bimbo eruptions and other things. 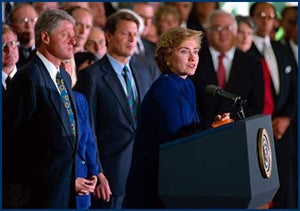 RUSH: Here are the relevant pieces in this American Prospect story, and this is from the September 14th issue on the Web only. Here’s the bottom line on Hillary not authoring the health care plan of 1993: ‘Hillary’s appointment [to chair the program] underscored the president’s personal commitment.’ Pfft! ‘Although she made no claim to being a health-policy expert, she had successfully led a similar effort to develop educational policy in Arkansas, and her gifts complemented Magaziner’s.’ Remember that line of BS? And look where Arkansas ranked in education when she got through. Number 49 or 50! I’m not kidding about this, folks. She also had ‘gifts which complemented’ Ira Magaziner’s, and I remember during this health care thing we thought he was the brains behind it. ‘The overall direction of policy was not Hillary’s choice. She had not been present at the key meetings during the campaign when Clinton had discussed health policy with his advisers, and in the first days in the White House, she was just familiarizing herself with the approach to reform that her husband had adopted.’ Now this is interesting on a number of levels. A, this is a guy that was in the Clinton White House, so we assume he’s telling the truth. Hillary’s big claim to fame, in one way, was that she was the author. She put it all together. She’s the brilliant, smartest woman in the world.

Her other claim to fame is that it went down the tubes with her at the helm, and it may have contributed to the Democrats losing the House in ’94. So now all of a sudden the Clinton White House is getting news out that she didn’t have a thing to do with putting this together. She just chaired the thing. She was in charge of the bus trips — which bombed miserably — and she was in charge of testifying before congressional committees, but she didn’t have anything to do with it. It was Bill’s idea. Man, can you imagine what goes on in this household, folks, when the doors are closed and the lights are off? Man! Why put this out there now? This comes out on the eve of her announcing the revitalized plan. She just did it up in Iowa. The second thing about this that rings a bell… I always told people that the Clintons were a team, that Clinton himself had to be the one to get the votes, and so he had to appear moderate. He had to appear centrist. He had to appear in the middle. Hillary was doing all the really far-left, extreme dirty work: picking the judicial nominees and the cabinet heads and all this sort of stuff. This sort of confirms that. Clinton is out there crafting like a mad scientist all this socialist, far-left extremist stuff. But Hillary’s getting all the credit for doing it, while he’s back there (impression), ‘I got my job. She’s got hers, and, you know, we got this triangulation scheme we’re trying here. We got the Democrat Leadership Council. ‘We’re not Democrats or Republicans.” The whole thing, folks. I don’t want to go through O.J. again and I don’t want to go through the Clintons again. I just do not.