Hollywood Should Be Making Movies Like The Lives of Others 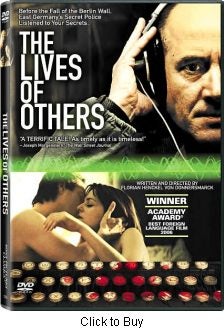 RUSH: I watched a movie last night I’ve got to tell you about. I normally don’t do this, but I gotta tell you about it. Greetings, folks, and welcome. Here we are, the fastest week in media. We’re already on Wednesday. This is hump day. It’s also the fastest three hours in media. The telephone number here if you want to be on the program — I’m sure you do — 800-282-2882, and the e-mail address is ElRushbo@eibnet.com.

I got a Blu-ray player, HD DVD and Blu-ray, have them both. Whenever a new release is out I just go get ’em. I have stacks of them I haven’t seen yet. So I decided when I got home late yesterday afternoon, I’m going to chill. Rather than start doing show prep immediately, I’m going to go in there and watch something. I started going through the stack, I said, ‘Hmm, I’ve heard about this.’ The movie was The Lives of Others, and it won the Oscar for best foreign language film. So I put it in, if it won an Oscar, I don’t care what it is, it’s gotta be suspect. It’s just the opposite. This is the kind of movie that the United States ought to be making. This is the kind of movie that Hollywood ought to be making. I don’t want to tell you too much about it other than it was just fabulous.

The movie starts in 1984 and it’s German. It runs through the fall of the Berlin Wall, even a little after that, and it is how the East German Stasi, the secret police, spied on citizens and destroyed their lives. Have you seen it, Dawn? She’s nodding in there like she knows what I’m talking about. Now, if Hollywood made this movie, they would make it about Bush, I’m sure. I don’t want to tell you any more about it, but I should tell you this. It does have some nudity in it, it’s got an R rating, but it’s not a sex movie. It’s not that at all. So don’t let the R scare you. You wouldn’t want your crumb crunchers watching it with you because of the nudity, but it isn’t even necessary. I think it’s just the arty croissant crowd, they like getting R’s, because, ‘Ooh, it’s really bad, let’s go, Mabel,’ and in this case, it’s not. I find it interesting it was made in Germany. This is one of the most accurate portrayals of life under socialism and communism that you’ll see. It is in German, so you gotta turn on the closed-captioning here to be able to keep up with it. Lives of Others, is the name of it, and it’s on regular DVD, too. You don’t have to watch it in HD.