Tom Harkin, Who Lied About His Service, Desecrated the Senate

RUSH: It’s time somebody told liberals, and that somebody is me, that they don’t get to say what people meant either by virtue of their pronouns or their phrases. Liberals do not get to interpret the supposed code words of speech, especially since they reserve the infinite right to revise and extend or otherwise clarify their remarks, such as Joe Biden and his insult to Barack Obama. Well, we gotta ‘clean,’ ‘articulate’ black guy for a change. ‘Oh, I did not really mean that.’ Of course, Senator Biden! Of course, he didn’t mean that! No resolutions against Senator Biden from anyone on the floor of the Senate. One of my favorite examples of this, changing the meaning of words, comes from Charlie Rangel, talking about the 1994 Republican Congress. He used a couple of racial epithets: the S-word to describe Mexicans; the N-word to describe blacks. He said, ‘It’s not S or N anymore. They say, ‘Let’s cut taxes.” This is Charlie Rangel redefining the phrase ‘let’s cut taxes’ as the S-word, the N-word. Of course, we all remember the wither-on-the-vine example. They took Newt Gingrich completely out of context when he was talking about Medicare. Let’s go to the audio sound bites. We’ll start at the top. Tom Harkin, yesterday, on the floor of the Senate, was weighing in on the phony soldiers’ debate — when he has admitted to inflating his own military record in the past. 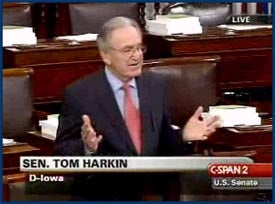 HARKIN: I must say that as a veteran, I find it offensive that Rush Limbaugh, who never put on the uniform of this country, would attack the patriotism and the dedication of any soldier fighting in Iraq. I’ve often said about someone like that, ‘Before they drape themselves in the flag of this country, they ought to put on the uniform first to defend it,’ and in Mr. Limbaugh’s case, he wouldn’t do that. Well, I also find it disturbing that his offensive comments have not been condemned by our Republican colleagues or by the commander-in-chief, all of whom are so quick to condemn a similar personal attack on General Petraeus several weeks ago.

RUSH: (laughing) Why should they condemn something that wasn’t said? You know what ought to be condemned here is your wanton inability to find the truth. Something fits your narrative, Senator Harkin, and you just run to the floor of the Senate with it. I can’t believe these people do not know the truth. I think they know the truth. I think they know they are lying. I think they know that they are engaged in a smear, and they are doing so happily. Now, Senator Harkin talked about the fact that he was a veteran. ‘While running for his Senate seat in 1984, and again while running for the Democratic presidential nomination in 1992, Harkin has faced criticism for claiming that he had flown combat missions over North Vietnam. In a 1979 round table discussion with other Congressional veterans, Harkin said of his service as a Navy pilot: ‘One year was in Vietnam. I was flying F-4s and F-8s on combat air patrols and photo-reconnaissance support missions.’ These comments were later published in a 1981 book by David Broder. After subsequent inquiries by Barry Goldwater and The Wall Street Journal, Harkin clarified that that he had been stationed in Japan and sometimes flew recently repaired aircraft on test missions over Vietnam. His service flying F-4s and F-8s was later, while he was stationed in Cuba. References to this controversy were deleted from Wikipedia by staffers from Harkin’s Senate office.’ Also note: I haven’t worn the uniform; I’m not qualified to speak. I’m not allowed. This is a Stalinist-like approach. One more sound bite here from Harkin.

HARKIN: What’s most despicable is that Rush Limbaugh says these provocative things to make more money. So he castigates our soldiers. This makes more news. It becomes in the news. More people tune in. He makes more money. Well, I don’t know. Maybe he was just high on his drugs again. I don’t know whether he was or not. If so, he ought to let us know, but that shouldn’t be an excuse. I want to make it clear that I respect Mr. Limbaugh’s right to say whatever he wants, but we also have a right. We have a right not to listen to him. I think the best thing to do for him is tune him out. Just tune out Rush Limbaugh, and listen to more responsible talk show hosts in this country.

RUSH: I have never castigated the troops. I didn’t manufacture a news story out of this. Your buddies did, Senator Harkin. To say these kinds of things and desecrate the floor of the Senate of the United States, is what these Democrats have become.