RUSH: One of the latest tactics of the Media Matters group and the rest of these smear artists and General ‘Ashley Wilkes’ Wesley Clark, who went and lied through his teeth today about me on MSNBC claiming that I have a long history of criticism and disrespect for members of the US military, just lying through his teeth. His point was, well, hey, why, we condemn Petraeus, we gotta condemn Limbaugh. So Congress needs to get in this referee situation, one condemnation’s gotta be met with another condemnation. And of course the left is now pushing this. They’re trying to make my phony soldier comment on par with their Betray Us ad. Of course, their Betray Us ad was a full-fledged, well-thought-out and produced and created ad from MoveOn.org. They’re taking two of my words, ‘phony soldiers,’ and are using hundreds of words to manipulate it into a smear. They are trying to interpret what I meant for everybody else and they’re trying to tell everybody what I meant and what I was thinking when I said it.

Here’s the difference. They’re running around saying both sides went too far. The left, they’re now trying to retreat a little bit. ‘Well, Mr. Limbaugh, I think both sides went too far here. The Petraeus ad clearly was over the line, but so were you, with your phony soldier comment.’ One small reality here, folks. The Betray Us ad was created by them, and so was the phony soldier smear. I didn’t do anything! I’m sitting here minding my own business, bothering nobody. They created both. Now they are saying, ‘Well, both sides have gone too far, and we need tit-for-tat, Mr. Limbaugh.’ You guys went too far on both! Both of these things are you guys from Media Matters, MoveOn.org, Mrs. Clinton’s office, Sidney Blumenthal, whoever the hell is behind all this, you guys did both of these and you’re biting the dust on both of them. Let’s go to Jack Kingston, congressman from Georgia. He was on with Neil Cavuto yesterday. Cavuto said, ‘Jack Kingston, Republican, who just introduced a resolution in support of Rush, congressman, what are you doing here?’

KINGSTON: We’re basically pushing back — this is not about patriotism, it’s about politics, it is about Rush Limbaugh, it’s about talk radio, it’s about the Fairness Doctrine and the fact that the Democrats are trying to get back at us for the General Betray Us ad, which none of them to my knowledge denounced until they had to. So what we want to do is have a resolution that commended Rush Limbaugh for everything he’s done supporting troops, his visits to Afghanistan, his support of the Marine Corps families, and also to say certainly anybody has a right to disagree with the war, whether they’re in uniform, active, or inactive, if they’ve never worn a uniform. When he referred to phony soldiers, though, he was very specific that he was talking about people who actually are claiming they were in combat or claiming they were in Iraq when they never in fact were.

RUSH: Jack Kingston on Fox yesterday afternoon with Neil Cavuto. Cavuto then says, ‘What do you make of the fact, though, that some conservatives have argued there’s a witch hunt going on here, taking things Rush says, or going after Sean Hannity or Bill O’Reilly, in other words, to take their remarks, whether they’re in or out of context, and just run with them?’

KINGSTON: Well, Neil, going back to President Clinton, the left has never liked talk radio and the fact that we do have a cadre of conservative commentators out there who aren’t necessarily on radio, but television as well, who will give both sides of the story. They prefer the more filtered conventional media and so they’ve been attacking it through the Fairness Doctrine and talking about talk radio as hate speech and things like this, so this gives them an opportunity to wrap themselves around the flag, attack Rush Limbaugh, and attack talk radio all at once. Rush Limbaugh is in the business of talk radio. He has callers from all spectrums of the political debate coming in, and he’s a private citizen.

RUSH: That’s a key point. Thank you, Congressman Kingston, who offered a counter-resolution in the House of Representatives to counter the Democrat resolution condemning me, which, I don’t know, MSNBC reported today the Democrats have moved it to the back burner in the House of Representatives. I forget the reporter’s name on MSNBC, but that’s what he said. Let’s go now to this morning on Fox &amp; Friends. Steve Doocy, the weather guy, introducing Congressmen Joe Sestak and Mike Pence. Doocy said, ‘Congressman Sestak, let me ask you about this. According to Rush Limbaugh, the Democrats are taking him out of context.’

SESTAK: If you look at the transcript, you can see that in response to a caller that said, hey, look, they’re finding soldiers in the media to talk against the war, he said those are phony soldiers.

PENCE: I read the transcript, too. A literal reading of the transcript shows that Rush Limbaugh did not call veterans who oppose the war phony soldiers. In fact, the term comes from an ABC News report that aired the Monday night before the Wednesday that he used the term. He did a commentary on Tuesday on the subject. I see this all as a precursor to an effort by the Democrats in Congress to reintroduce the Fairness Doctrine. I mean what on earth business is it of the United States Senate to be policing the airwaves of America? And I really do believe this whole incident, the circus on the Senate floor Monday, argues for the legislation that we’ve introduced in the House that would put the Fairness Doctrine out of reach of any future president or any future Congress.

RUSH: Thank you, Mike Pence, who has led the effort in the House on this anti-Fairness Doctrine legislation that the Democrats no doubt, if they win the White House, will attempt to redeploy.

Melanie, in Omaha, I’m glad you called. Welcome to the Rush Limbaugh program.

RUSH: How old are you now?

RUSH: Fifteen years. Hubba hubba! By the way, Melanie is one of my all-time, top-ten favorite female names.

CALLER: Rush, I want to thank you because actually since you’re the subject in Congress right now, they’re not shoving anything else down our throats. You’re kind of a diversion for them, so thank you.

So they are throwing things in the works to try to interrupt funding, not just for Iraq, but for the whole defense budget. And they passed it because they had this amendment in there. The appropriations process is in a whole different thing from the authorization process. You authorize the money to be spent. Now, the appropriations process is where the real debate will begin. The likely thing to happen here is, is that Senate Democrats will probably again challenge the president’s war policy with debate of the $459 billion defense appropriations bill scheduled to start today, maybe later, with a separate $189 billion emergency war funding bill. Now, this is the bill that three members of the House, Murtha, Obey, and I forget who else, attempted to propose — or did propose a surtax on income for everybody except the poor. Middle and upper income people, 2% surtax on lower and middle class income, 12 to 15% surtax on income of the wealthy. By the way, some Democrats proposed this as well, too. It was shot down. It was dismissed as half-baked, and that was the view of Democrat leaders.

They’re still monkeying around with this. They are still trying to find ways to de-fund the troops through the meandering legislative process. Jim McGovern was the third in the tax surcharge idea, was Obey, Murtha and Jim McGovern. They were doing everything they could here to get Bush to veto it so that the money doesn’t go forward. So the battle continues. They’re still trying to de-fund the troops, folks, they’re still trying to lose the war. This is the bottom line. It is they who hold no regard for uniformed military personnel. It is they who continue to try to undermine the mission. They say they support the troops, just not the mission. You can’t. You support the troops, you support what they do. What they do is the mission. So your Democrat Party, your left wing in this country is still doing everything it can to undermine the success and the mission of the US military, despite this flap that’s happening with me.

RUSH: Jon Kyl from Arizona was on the Fox News Channel today with the host Jon Scott. Two sound bites here. Scott says, ‘Senator, you, too, are among those defending Rush Limbaugh, right?’ 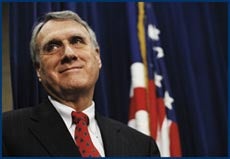 KYL: That’s right, Jon, it’s been a mischaracterization of what he said from the very beginning, of course intentionally so. He didn’t say that all the troops that disagree with the war or the president were phony troops. He was referring to a specific soldier, who it turns out was a phony soldier and who had been discussed in his program before the conversation that resulted in all the controversy. It is a politically generated controversy by Democrats who want to change the subject from the Petraeus Betray Us ad, which they got a lot of criticism for because they’d been supported by MoveOn.org and didn’t want to criticize the ad.

RUSH: So Jon Scott says, ‘And that seemed like a much more personal, much more direct slap at the general rather than this comment by Rush Limbaugh, which I guess, depending on how you read it, I mean you leave off one sentence or one word of what he said, and all of a sudden it’s not an issue at all.’

KYL: Well, that’s right. And they had been discussing the — this one particular case, which was very unfortunate, a young man who was very critical of the war and claimed to have fought in — I think he claimed to have fought in Iraq and so on. And it turns out that he hadn’t. He served, I think, like six weeks and was never in combat, was never abroad, and had been dubbed the phony soldier. And that’s what the comment was about. Neither Limbaugh nor anybody else would ever — just think how silly this is, that any soldier that disagrees with the president’s policy is a phony soldier. That’s just not true.

RUSH: That’s what they tried to make it out to be. And again, in all of this, I must remind you again, in all of this, there still have been precious few details to come forward about what Jesse MacBeth did, and what he was convicted of and what he alleged. He said he saw US troops hang innocent Iraqis, children, parents from the rafters of mosques — it was all lies. He was never there. That’s the phony soldier. They’re all over the place, and nobody’s talking about them.