RUSH: Let me get to the audio sound bites because I need to thank some people, ladies and gentlemen. There are other items in the news, some stuff I’ve held over from yesterday that are not related to this — to this — oh! Sullivan Group, opinion audit. That’s what it was. In the last week alone, my opinion auditing firm has shown that I’m up a tenth of a point again, documented to be almost always right 98.8% of the time, in the midst of dealing with this smear. It’s amazing, I knew this was going to be the case, and I wanted to pass that on to you.

Fred Thompson last night on Hannity &amp; Colmes, Sean said to him, ‘Your campaign released a statement from you regarding the comments and activities to condemn Rush Limbaugh on the Senate floor.’

THOMPSON: They’re trying to divert attention from the embarrassment of having to align themselves with an outfit like MoveOn.org because they raise so much money for the Democrats, and MoveOn, you know, practically calls Petraeus a traitor, and most of them don’t vote to condemn them for that. And yet they’ll take something that somebody like Limbaugh says, which was totally a distortion of what he was talking about, clearly, and to try to divert attention away from it and go to the Senate floor and take the time of the United States Senate to personally insult him. You know, that’s one of the reasons why Congress has an 11% approval rating.

RUSH: That is Fred Thompson last night on Hannity &amp; Colmes. Yesterday afternoon on Your World With Neil Cavuto, Mitch McConnell, a Republican leader in the Senate, Cavuto said to McConnell, ‘So far there are no reports of advertisers bailing. His boss over at Clear Channel continues to defend him.’ (laughing) Neil, psst, don’t tell anybody, it’s the opposite. We have people waiting in line. Psst, don’t tell anybody. ‘This, as Democrats blast the conservative talk show host over his phony soldiers comment. My next guest is also supporting Rush, and he’s a pretty powerful guy in his own right, minority leader Mitch McConnell. Senator, they still whack him. Any body blows here?’

MCCONNELL: I read what he had to say. He’s got nothing to apologize for. He’s certainly said nothing to be condemned for. The Democrats are just trying to move past this outrageous ad in the New York Times by MoveOn.org calling General Petraeus, in effect, a traitor. I don’t know — you know, when we actually voted on that, about half the Democrats in the Senate voted with us to condemn the ad. They had a similar vote over in the House, and more than half of the House Democrats also voted to condemn the ad. That was something worthy of condemnation. Rush Limbaugh didn’t say anything that he should regret or that we should condemn him for.

RUSH: Mitch McConnell on Neil Cavuto’s show yesterday. And then, last night Senator McCain on CNN, The Situation Room, John King speaking to Senator McCain, said, ‘The dust-up in recent days has been Harry Reid demanding an apology from Rush calling a remark about phony soldiers. He says he was taken out of context, was criticizing one person who lied about Iraq.’

MCCAIN: I don’t know exactly about the back-and-forth between Senator Reid and Rush Limbaugh. I did issue a statement saying that I thought it was inappropriate, and perhaps Mr. Limbaugh didn’t mean it, but he should not have said it.

RUSH: He has gone further than that now and has said, (paraphrasing) ‘Well, I know Limbaugh said he was talking about one soldier, it’s over for me, case closed,’ so he’s even gone further than that. Now we want to go back to the House floor. We’re going to go back to sound bites 12 and 13. Last night, on the floor of the House, this continues. This is Congressman Steve Israel, Democrat, New York.

ISRAEL: — has the right to call any member of our armed forces phony. And Rush Limbaugh owes them an apology.

RUSH: That was day eight, folks, and Steve Israel, you’re embarrassing yourself. You had a week to learn the facts, to get up to speed on this, all these Democrats have. How in the world can you say that nobody has the right to impugn or attack soldiers while they’re fighting in combat? Look to your own party, Congressman Israel, look to your own party. You cannot be this ignorant. You cannot be that ignorant of how your own fellow congressman in the House of Representatives said, Congressman Murtha, for example, who has accused them of being murderers, active duty soldiers as murderers, Marines! This is totally Kafkaesque, ladies and gentlemen. It is. Chatsworth Osborne, Jr., had the right term. This is Orwellian. Do they not know how they are making themselves appear to the people of this country? Mr. Israel wasn’t finished.

RUSH: I realize some of you may be upset with me for laughing about this, but I’ll tell you what, I think Steve Israel, you have just become the champion of Jesse MacBeth. That’s who I’m talking about, and others like him. And I’ve been talking about them for awhile now. Not Jesse MacBeth, Jesse Al-Zaid is his real birth name: Jesse Al-Zaid. If you want to speak up for this guy, and your party has been doing it before they find out that they’re frauds, your party has been standing up for all of these guys that come back and start launching these tales that are not true or they were never there or frauding the VA. It is your party, Congressman, that props these people up, because it is you, Congressman Israel, and your party, who detest the success of the US military. It is your party in both the House and the Senate that has been doing everything you can do to secure defeat for this country and these troops, in battle, in Iraq, and in the war on terror. And you know it.

You have been trying to get this war defeated and lost; you’ve been trying to gin up hatred for the war and the troops amongst the American people so you can gin up these public opinion polls to support your position to lose in this war. It is you who have been doing this, you and your party who have been impugning the integrity, the honor, the character, of the men and women who serve in uniform in this United States military. They know it, I know it, and you know it. You embarrass yourself and make yourself out to be a fool on day eight of this, purposefully distorting it, lying about it, because you have to know the truth. If you don’t know the truth and you haven’t endeavored to discover the truth, then you pose a great threat as a member of the United States Congress, because if you don’t see this truth, what other truths are you missing?

CALLER: Hey, I think you’re just being disingenuous about this issue on the action in Congress.

RUSH: I am being disingenuous —

RUSH: — about all the action in Congress?

CALLER: Yeah, you say that and you get your little lap boys in Congress to defend you.

RUSH: James, what have I been doing for 20 years?

CALLER: You’ve been telling one side of the story.

RUSH: No. I tell the liberal side of every story in order to show how wrong it is. You just don’t listen. I spell liberalism out more honestly and openly than they do, James. I couldn’t possibly do a one-sided show here. I am a conservative, about which I do not apologize, for which I don’t hide. I’m very proud of it. I want people to know, I want people to join me. But part of the time in explaining conservatism, I have to set it up against liberalism, which I do all the time. We talk about the SCHIP health program, I tell exactly what the Democrats are doing with it, what exactly their purpose for it is. You just can’t handle truth. This is the problem. You’ve got this cocoon that you’ve woven, you live in, and I, El Rushbo, come along, and like a wasp or a bee, keep stinging little holes in it, and you are in pain. You gotta call here and try to distort, which is what you guys are greatest at, and which is what I have become an expert at illustrating. Thanks for the call. See, there’s both sides represented on this program in one phone call.

RUSH: I want to say one other thing, going back to Steve Israel, when he says I’m giving aid and comfort to the enemy. Who, in lying about all this, who has been giving aid and comfort to the enemy? When Osama Bin Laden, or whoever, releases one of these famous tapes, whose talking points are they using? The Democrat Party’s. When Mahmoud Ahmadinejad comes to the United States, or hell, from his little balcony over there in Tehran, when he starts in on the US, whose talking points is he using? The Democrat Party. For crying out loud, the guy even criticizes Bush for Hurricane Katrina. The little pip-squeak from Tehran. They use Democrat talking points, Congressman Israel. It is plain as day for anybody. You want to talk about giving aid and comfort to the enemy — who is it that our enemies hope win elections? It is you, Congressman Israel, and your party. Bin Laden and, what’s his name, Ahmadinejad, are all hoping that your party wins elections. That’s what would embarrass me. 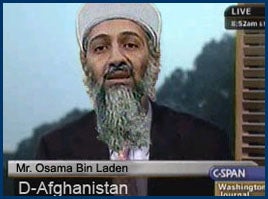 It would embarrass me to see this little pip-squeak come over here, be invited to speak at Columbia, he’s a maniacal mass murderer, he sounds just like Democrats. I would be embarrassed if I were a Democrat and this guy starts talking about my country the way he does, ‘My gosh, he sounds just like I do, this is horrible.’ But you guys seem to embrace this. You seem to embrace the enemies of the United States. If they’re on your side politically, if they hate Bush, if they can help you succeed in losing this war so you can hang that defeat around Bush and destroy his presidency and get it for yourself, you seem to embrace it. What makes this smear on me so patently ridiculous, is it has zero substance to it. It is a total fraud, and you guys buy into it hook, line, and sinker. You speak of me in ways you will not speak of our enemies. You speak of me, Wesley Clark, censor me, Ken Salazar from Colorado wants to censure me and I can’t even be censured because I’m not a senator. Has he read the Constitution?

These are morons. Harry Reid, I don’t care, Jan Schakowsky, all these people have gone to the House floor or the Senate floor, Tom Harkin, demeaning himself and his family with personal attacks on me from the floor of the Senate. These people are saying things about me, ladies and gentlemen, they would not say about Bin Laden, that they will not say about Ahmadinejad. They will not say these things in general about our enemy. In fact, they have been highly critical of active duty military, impugning their ability to win, making up stories about atrocities that they never committed. And yet, you won’t speak that way of our real genuine enemies. (interruption) Well, that’s true, Durbin — but there’s so many to remember. Kerry, insulting their intelligence. Kerry has built a career on attacking active duty military, starting in 1971. Durbin comparing our troops in prisons to Nazis and Soviet assassins and Pol Pot’s murderers. You think that doesn’t aid and abet the enemy, Mr. Israel?