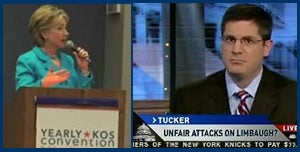 RUSH: Here’s Mrs. Clinton. We want to go back to August 4th of 2007 at the YearlyKos convention.

HILLARY: We are certainly better prepared and more focused on, you know, taking our arguments and making them effective and disseminating them widely and really putting together a network in the blogosphere, in a lot of the new progressive infrastructure, institutions that I helped to start and support, like Media Matters and Center for American Progress.

WALDMAN: Well, we don’t make any bones about the fact that we are a progressive organization. We don’t endorse candidates. We don’t coordinate with candidates. It was like started by David Brock, whom you know, and used to be a conservative and big part of the conservative movement, but when he had a change of heart, he realized that there was a big gap in the whole area of how we look at the media. And so what we at Media Matters do every day is we look at the mainstream media, we monitor the conservative media, and when we find misinformation we put it up on our website, explain why it’s wrong. And another part of what we do is we look for the kinds of things like this statement by Rush Limbaugh that people find problematic.

RUSH: Yeah, yeah, yeah. Look for the statement and then lie about it. You don’t get to determine my meaning. You don’t get to interpret what was in my mind. You don’t get to create the so-called ambiguity that’s out there. Then Tucker said, ‘Wait a minute, what does Hillary mean that she helped start Media Matters?’

WALDMAN: Well, I think that she’s a supporter of what we do and a lot of people have encouraged us —

CARLSON: Did she help start it?

WALDMAN: No, I think she’s been someone who encouraged it and was supportive like a lot of progressive —

RUSH: Wait a minute. I thought Media Matters was infallible? I thought whatever they said was unassailable? You weren’t even supposed to examine what Media Matters says. Now we’ve got Mrs. Clinton saying that she helped start Media Matters. Now we’ve got a Media Matters guy saying she didn’t. Now, when I grew up, what this kind of lesson taught me was, when you have two people saying different things, one of them is lying. You might say that one of them is wrong, but that wouldn’t cover what’s happening here. So this is what I said earlier when I opened up today’s excursion into broadcast excellence. Mrs. Clinton cannot be happy that this organization, which needs to work in the dark in order to succeed, now has all this light being shined on it. It’s a tough choice here to choose who’s the liar: Mrs. Clinton or Media Matters? I wouldn’t want to have to be the judge on that.

RUSH: Let me tell you one thing about what’s going on with Media Matters. I don’t want to leave it here that somebody is lying. Mrs. Clinton says she helped start it. Media Matters says, ‘No, she didn’t. She’s just supporter.’ They have nonprofit status, which prohibits them from being involved in politics, if you can believe this. They have nonprofit status at Media Matters, which prohibits them from being involved in politics. So, if they admit that Hillary Clinton was the driving force behind founding them, if they admit that they are coordinating in any way with her, or her other entities and campaign people, if they admit that they are in any way doing her bidding, then they’ve got a serious IRS issue. That’s why they gotta maintain their nonprofit status. He did not admit that she started it. He denied that. He said she’s a supporter. They can’t afford to admit it. She’s the one who said it. I know you’re probably saying, ‘Well, if she admits it, then why the hell do they hold onto their nonprofit status?’ Somebody’s going to have to pursue that. I don’t know that anybody will. But, anyway, this is not good for them, the light of truth shining on who they are. This is one of these groups that has to operate in the dark. Their official TV outlet is MSNBC. MSNBC’s primetime programming largely is produced by Media Matters.

RUSH: Bob in Queens. You’re next, sir. Welcome to the phone call.

CALLER: Yeah, how you doing, Rush?

CALLER: Great American: I was watching Newt Gingrich the other night, and he stepped down, as you know, he’s not going to run. And he said the reason was that the organization that he started, he was going to leave, sever himself from them, but he couldn’t run as president of the United States because if he campaigned even on a thing, it was in small print, in the McCain-Feingold bill, let’s say making America a national language, that being he could be charged with a felony because of this group he started. So it wasn’t a matter of severing yourself of all ties, it was a matter that you couldn’t campaign on anything that they were putting out there. Now Hillary Clinton just admitted, in my opinion, to a felony according to McCain-Feingold.

RUSH: Right. I know what you’re setting up. What you’re saying is how come Newt has to quit —

RUSH: — his presidential campaign or abandon it, because if he continues it with the American Solutions group still operating and fundraising, that he’s violating some fine print in McCain-Feingold.

RUSH: So the question, well, if Hillary started Media Matters, and they are a fundraising group — actually I don’t know that they are — I guess they are. I don’t know if they ask average people to donate. They’re not making any money in the private sector. It’s people like George Soros — there’s a list of their donors, so I guess they’re fundraisers, too, and so you’re saying, okay, they’re fundraising, and Mrs. Clinton started the group, and she’s using the group to fund-raise, but not for her.

RUSH: That’s probably where the difference is. I understand how you can have this concern. You know, also, it may be that Newt’s a little bit more sensitive to the law than some people are on something like this. Campaign finance laws are routinely skirted, played with, and they’re so complicated. That’s why there’s so many appeals to the Federal Election Commission to arbitrate some of the disputes that are brought up. My guess at the top would be that Newt’s group, American Solutions, I’d have to know if it’s a 501(c)(3) which Media Matters has filed themselves as a nonprofit. I don’t know what Newt’s filing is. I’m not really sure.

CALLER: Maybe you could get in touch with Newt, and he’d explain it better than I can, you know.

It’s not just some fundraising vehicle to keep Newt Gingrich visible, because a presidential campaign would make him far more visible than his American Solutions program is. So I think it means he’s committed to it. And, frankly, I think this is a great place for Newt Gingrich to be. I think this is the kind of thing that he excels at. He’s got such an active, percolating mind, that having it in part of a presidential campaign would be attractive and so forth, but his kind of strategizing, and historical knowledge, and his ability to bring that to others and teach is exactly what American Solutions is all about. A presidential campaign doesn’t give you that much time to teach because you’re too busy dealing with the anal exam that the Drive-By Media and your opponents are giving you. I gotta run, Bob. I appreciate the phone call.