Reid Smear Letter Is an Investment


RUSH: We are now into the last day, the auction ends in 23 hours, a little less than that actually, at 1 p.m. Eastern time on Friday, which, for those of you in Rio Linda, is tomorrow. For those of you illegal immigrants, it’s ma&ntilde;ana. We’re at $131,325 on the auction. It’s doubled in less than 24 hours. When I left yesterday it was $65,100. By 4:30, it was $100,000 even, and now it’s at $131,325. A couple of things. You know that the proceeds here go to the Marine Corps-Law Enforcement Foundation, which provide college scholarships for the children of Marines and federal law enforcement officers killed in the line of duty. Here’s something to think about, though. This is a historic document, a point that I have repeatedly made over and over and over again. But, since it is historical, think about what a great investment the Harry Reid letter is for a collector. 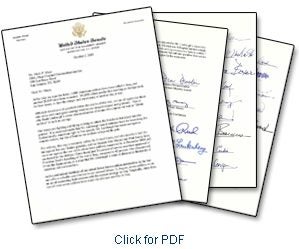 When you think about that, think about how livid he has to be. This was the last thing he expected to happen. He probably thought that letter would never, ever been seen by anybody, even though he read the letter on the Senate floor, and even though he issued a big press release about it, he probably never expected that letter to see the light of day. Now it’s all over the place because we got copies of it, a PDF file copy on our website that anybody can download and print out for free. It’s in full color, so if you have a color printer or have a way to take the PDF file and make it a color document on paper, everything is the same except the paper that it’s on. Now, there are people that collect autographs out there, and there are people who collect historical documents. This one is a huge winner for either collector. Look at the signatures on here, 41 of them. You have Barack Obama; you have Hillary Rodham Clinton; you have Chris Dodd — presidential candidates represented. You have Ted Kennedy; you have Harry Reid, 41 Democrats on this thing. These signatures, not only are they valuable, but the buyer, the high bidder, will have the most important thing to collectors, which is the thing that proves the authenticity of the document.

Nobody will have any doubt that this is authentic. This is huge in collecting circles. The letter and the briefcase, the attach&eacute; case from Halliburton, and the pictures of me presenting the letter on stage in Philadelphia last Thursday night, and the money that is being generated already here for the Marine Corps-Law Enforcement Foundation, what a package; what an absolute package. What would be cool is to go get the paper version, the printed version that comes out of the Congressional Record, of Dingy Harry reading the letter. In fact, we probably have some of the audio. I’ll bet we still have the video, so we could maybe put that on a DVD and put it in this package as well. So whoever ends up being the high bidder here has made an investment, if he or she chooses to do so.