One hour to go: Senator Harry Reid (Democrat-Nevada) tried to horn in on the credit. What a guy! What a leader. What a grungy act. He implied that he and my syndication partner worked out the fundraiser. But he didn’t even know his name. He kept calling him Mark ‘May.’ It’s Mays! He claimed he talked to him, and they had conversations, and they said, ‘Ah, it’s not going to raise a whole lot of money.’ Dingy Harry tried to horn in on this and get credit for it in the last hour — and as I predicted on Friday, the Drive-By Media in most places went right along with it. The New York Times and Reuters went right along with it. When a Republican has egg on his face, it’s a Republican issue. When a Democrat has egg on his face, they turn it into, ‘Both sides do it,’ and they try to turn this into a story, to you, me, and Senator Harry Reid, were both wrong. Listen to the way the New York Times started on Saturday. This is the babe who called me and wanted an interview, and I told you I wasn’t going to do it because I looked into some of the other things she’s written and she attacks private charity because that money doesn’t go to the government. So here’s her lede on Saturday. Stephanie Strom is her name. ‘After Rush Limbaugh referred to Iraq war veterans critical to the war as ‘phony soldiers’…’ So they start out with a lie! After 17 days of this, they still perpetuate the lie. ‘[H]e received a letter of complaint signed by 41 Democratic senators. He decided to auction the letter, which he described as ‘this glittering jewel of colossal ignorance,’ for charity, and he pledged to match the price, dollar for dollar.’ So they start out with a false premise, and they close with a former IRS agent in the Clinton administration claiming that there might not be tax deductibility for the donor here, which to me signaled that they might investigate the donor.

They know no bounds of depravity.

RUSH: This is Don in Detroit. You’re next, Don, with Rush Limbaugh, the EIB Network. 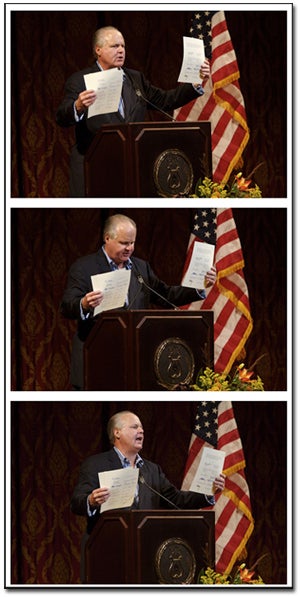 CALLER: Hey, just out of curiosity, I wonder what you thought about eBay giving more advertising credence to Jerry Garcia’s kitchen sink than to the US Constipation there, the Declaration of Incompetence.

RUSH: You mean eBay’s coverage of the ‘phony soldier’ smear letter and how much it raised?

CALLER: Absolutely. They didn’t even have the decency to put you on the front page, their home page, and they had Jerry Garcia’s sink up there for like a month.

RUSH: This should not surprise you.

CALLER: Well, it kind of outrages me a little bit. I mean, here you are raising all this money, three-times more than eBay’s ever raised for anybody else —

RUSH: On a charity.

CALLER: Absolutely. On a charity. eBay should have given credit where credit is due.

RUSH: You know, I don’t expect that from outfits like this. eBay helped us out tremendously and they administered the auction very well with a couple of partners, but the people who run eBay are very liberal Democrat.

CALLER: They made a lot of money off of this as well.

RUSH: I think they wave their fees on charitable auctions. But even had they not, we were going to pays those. The high bidder, the winner of the Harry Reid letter, was not going to have any expense whatsoever associated with this. But, look, I predicted to you people on Friday: Once Dingy Harry came out with that last-minute appeal to make it look like he was part of the fundraising effort all along, I said, ‘The whole purpose of this is designed to get the Drive-By Media, which are in the tank for Democrats, an out in order to get Harry Reid involved in this.’ The last thing they want to do is report success on the part of somebody like me. I’ve taken my own little informal, personal surveys. You would be amazed. The New York Post has not said a word about it. The New York Times lied about it. The New York Daily News put a one-line blurb or two-line blurb at the end of a big story on radio — and this is perfectly understandable, folks. These are liberals. If you don’t know it by now, you have to understand, or you must try to understand — and I really don’t want to make this about me, but it is, unfortunately. They’ve had a monopoly. I’ve said this over and over again: They had a monopoly.

They used to be able to determine what was reported — and, more importantly, what wasn’t reported. They had every media controlled from broadcast, to cable, to print, the magazines and newspapers, and they don’t have that anymore. I’m the guy that started the trend that defeated their monopoly. So it’s personal with them. You can see it in the way they report. There’s an alternative universe here. The media lives in a different world than the rest of us do. As I told somebody on Friday: ‘To expect validation for what you do, or for what the conservatives get done in this country in the mainstream media — to even expect objectivity and accurate reporting — is an expectation that you’re only going to be disappointed in because it’s never going to be met.’ We know who they are. We know what angers them. We know their gnashing their teeth over this. That’s part of the success and the fun with it. The way to look at this is not that they’re not covering it fairly, because we know that’s going to happen. The way to look at this is: ‘Look what we did without them.’ Not only did they not cover it after the fact, they didn’t cover it before or during — and those that did touch on it got it wrong, as was also predicted. So this was done, this record and so forth was set on eBay without them. It’s a positive! It’s a net win-win.