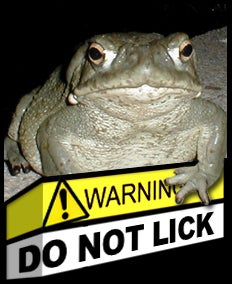 Do you remember back in the late eighties the phenomenon known as toad licking? The Arkansas spotted toad. ‘A man in Missouri has been arrested for possession of a hallucinogenic toad. Police in Kansas City say David Theiss planned to get high by licking the Colorado River Toad’s venom glands.The 21-year-old is accused of possessing the toad ‘with the intention of using it as a hallucinogen.’ They said that many pet shops in the area do not stock the animal because the venom can make people sick and it can kill household pets.’ Now, you have to ask — when you hear about a toad that secretes some hallucinogenic substance, and that you can only ingest this by licking the toad — can you imagine, like everything else in the world, somebody had to discover this? Somebody had to be the first to do this, and I’ve always been fascinated by whoever it was. You’re walking along in Colorado, and you see a toad. What in the world would be your impulse to pick it up and lick it? Don’t give me this ‘happy accident’ business. I mean, what, did somebody trip over a twig, their mouth hit the toad, and they ended up hallucinogenic?

These are the kind of things that I am forever perplexed about. Imagine yourself, folks. Imagine yourselves in the woods somewhere, wherever the Colorado toad hangs out and you’re running around. You’re minding your own business. You’re probably an environmentalist wacko, you know, out on your typical hike through the boundless nature preserve that you’re using it as an excuse and a respite from the hustle bustle of civilized life, and you run across the toad, and you say, ‘Hmm, I think I will pick up that toad and lick it!’ Somebody had to do it first — and then, after they did it, they had to tell somebody else that they did it, and then that person said, ‘Ooh, cool,’ and it had to spread this way. This is not taught in the textbook. This is not — (interruption) What do you mean, ‘ancient peoples’? Ancient people, what? Licking frogs is an ancient peoples’ thing? Part of eating the frogs, you mean? Maybe that’s it. But, you know, somebody had to die for us to learn that you have to cook a lobster all the way through before you eat the darn thing. Somebody had to die. Somebody ought to do a book on these kind of things that we know and how do we know them and who died so that we could live knowing what we know.

RUSH: Here is Terry in Prescott, Arizona. Hi, Terry. It’s nice to have you on the EIB Network. Hello.

CALLER: Happy Thanksgiving, Rush. Thanks for having me on.

CALLER: Your question about toad licking is right on point because it’s one of those examples of how people don’t have any sense of history. When I was a freshman in college back in 1971, we actually learned anthropology from the anthropology teacher, and they told us that the shaman always had an assistant and the shaman’s assistant was a taster and the shaman went out, the religious leader of the tribe went out every day all day and got everything they could, ground it up, dried it, whatever, and they fed it to the assistant and then studied what happened to the assistant so the official taste tester , if you will, of the shaman —

RUSH: He was the toad-eater. When you read the plains Indians, the six tribes of the Salish up in north central Montana, Minnesota, et cetera, those people had all kind of things that got ’em high, and among those were the defecations, from certain animals. Now…

RUSH: Wait a second. Wait, wait just a second. We had this story, I didn’t get to it because bathroom stuff makes me nervous, but there was a story within the last two weeks about this.

CALLER: Well, there are imposed difficulties today, much in the same way that the modern environmental movement is anti-human, and sexist, and racist, and which is to kill people and save whales, they are imposed difficulties. But they can be unimposed, and be unimposed rather quickly when people determine that they’ll act in a way to preserve liberty and increase freedom, and that’s —

RUSH: Okay, so you’re absolutely right about this. I especially appreciate — you kind of snuck it in there, back when you took anthropology and were taught anthropology instead of Bush-bashing or global warming, you actually could learn these things.

CALLER: That’s right, you (unintelligible) and you laugh.

CALLER: Absolutely. And much in the same way that the Native American religions have religious rituals with peyote and other naturally occurring substances. Peyote, which is the seed off a cactus, no one would say let’s go bite the cactus, so it is a process of accretion of knowledge that occurred over centuries, but it was systematic. Even though it wasn’t a written language, it was a systematic oral history.

RUSH: You sound like a smart guy. A little pop quiz for you.

CALLER: Well, Walter Raleigh gave it to the English, but he got it from the Native Americans — they were smoking it for years.

CALLER: Did you ever see — there’s a great old comic routine where — where Newhart does this, where he’s Raleigh, calling back to the king to tell him what he’s found? Have you ever seen that?

CALLER: It’s the funniest thing. You get these leaves off the ground and the king covers up the phone and says, ‘Hey, Walter’s gone off the far end, he wants us to smoke leaves.’ It’s just hilarious. If you can get a cut of that, it’s one of the funniest things ever.

RUSH: I think Walter Raleigh… It was native peoples. I think cigars actually are traced to Cuba, are they not? The West Indies.

CALLER: You know, I think you’d be safe on the West Indies. I wouldn’t make it specifically Cuba. But I’m not like you, I’m not a cigar aficionado. I don’t have that much background in cigars, but I know that —

RUSH: It doesn’t matter. We all can’t know everything, I’m sure you understand.

CALLER: Oh, I’m more than willing to defer to you on that, O’Great One.