CALLER: And she wants to know your opinions about it.

RUSH: Before I give you my opinion so that you can give them to her, is she older or younger than you are?

RUSH: She’s in college. Where does she go to college?

RUSH: There in Reno?

RUSH: Well, I’m glad you called Autumn, don’t misunderstand, but why didn’t she call herself?

CALLER: Because she is either at work or school right now — she is at work right now.

RUSH: Does she believe that there are similarities?

RUSH: I see. And you are trying to convince her that there aren’t?

CALLER: No, she just — no. I was just calling for her because she wants your opinions on it.

RUSH: Okay. We have to take a Profit Center time-out here. Can you hold on for a couple minutes and I’ll come back and I’ll do my best to explain this as I believe it, okay?

RUSH: All right. Thank you very much. We’ll be back with 16-year-old Autumn in Reno.

RUSH: All right, Autumn, thank you for holding on.

RUSH: All right, are you writing these down, or are you recording this?

RUSH: Okay, so I don’t have to wait for you to write down. There’s a series of differences. In the first place, Vietnam, that was a war started and run by Democrats. Iraq was started, of course, by the terrorists.

RUSH: Now, Iraq did not attack the United States, but Al-Qaeda did, Middle East terrorists, and they have been attacking Americans around the world for years and killing Americans and others. After 9/11 happened, that is really the big key for anybody to understand here — there was no 9/11 that preceded our involvement in Vietnam — 9/11 happened, and the world is convinced that Saddam Hussein is making similar plans to attack the West. After 9/11 happens, the whole concept of preemptive war enters the picture, and that is, you don’t wait to be hit again. If you think you’re going to be hit, you take out whoever’s going to hit you, once you have evidence that people from that part of the world have already hit you. We went into Afghanistan a full year before Iraq, so if anybody tries to tell your sister that Iraq didn’t attack us, you tell ’em it’s a regional effort, that Iraq is simply one battle in the war against terrorism. But, as far as the other things are concerned, there is no draft today, there is no conscription.

Everybody joining the armed forces today, particularly after 9/11, knew exactly where they were going to be sent. They were going to be sent to Afghanistan or Iraq, in large part. Not everybody was, but when they signed up that’s what they signed up for. In Vietnam, there was a draft, and there was no real sense of national purpose behind what was happening in Vietnam because the explanation that we were told back then was, ‘Well, we gotta worry about this domino theory, if Vietnam goes communist, then Cambodia is going to go communist and Laos is going to go communist, and we gotta stop the domino theory,’ and that’s what was when we were in the middle of the Cold War with the Soviets, who are proxies along with the ChiComs helping the North Vietnamese. Also, another difference is Ho Chi Minh had gone to school in the United States and had actually been a chef in New York restaurants. None of Al-Qaeda — the only way they got in here was illegal immigration and so forth and to plan their attack against us.

In terms of the actual battle itself, Iraq has never been a quagmire. We were never bogged down as we were in Vietnam. We had a much greater will to win in Iraq than we did. Another major difference is that the commanding officers on the ground in Iraq are running the show and planning the strategery, and they didn’t always do a good job and they were replaced. Washington, Lyndon Johnson and Robert McNamara and a number of others were actually in charge of bombing runs, they micromanaged it. Also in Iraq, we were not burdened by Senator Kerry driving Swift Boats. He did drive Swift Boats in Vietnam, for a while. But really there’s no comparison between the two whatsoever. The best thing I can say to you to pass on to your sister is that the effort by today’s Democrats and today’s media to draw comparisons was that we lost in Vietnam, and we also ended up impeaching a president afterwards, Richard Nixon. 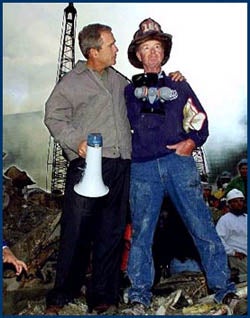 So what they’ve been trying to do for the last five years is to draw an analogy between Vietnam: We’re losing in Iraq just like we lost in Vietnam. They’ve been trying to manufacture scandal after scandal after scandal to make the Bush administration like the Nixon administration. They’ve been reliving history, or trying to recreate history for the purposes of political gain. Everybody knows that there’s no reasonable comparison between Iraq and Vietnam in any way, shape, manner, or form. Another difference, we lost 50,000 in Vietnam. It went on, and on, and on. What’s the latest count, 3,800 now in Iraq, and we’re going to win Iraq. I don’t want to upset Vietnam vets because it’s conventional wisdom that we lost. We did because we pulled out of there. But we could have won that. We never lost a battle. We could have won that had the military experts been allowed to be in charge of it. So does that help?

CALLER: Yeah, that helps a lot, thank you.

RUSH: All right. Does your sister have to write a report about this or something, did you say?

RUSH: Do you know anything about her professor?

RUSH: Was it an assigned paper or has she chosen the topic?

CALLER: I think she got to choose from a list of different topics or something like that.

RUSH: I’m sure it was on the list. Another thing about Vietnam, here’s one thing else I need to point out to you, Autumn, back in the days of Vietnam there was no alternative media. The Drive-By Media, the mainstream press, was the sole source of news back then.

RUSH: When Walter Cronkite, who was, quote, unquote, the most trusted man in America, the CBS Evening News anchor, when he basically said we can’t win there, Lyndon Johnson, the president, was watching, said, ‘Well, I’ve lost Cronkite, I’ve lost middle America.’

RUSH: Every Drive-By news anchor for the last four years in this country has been trying to say we’ve lost in Iraq. The Democrat Party leadership has proclaimed defeat. And yet, we’re winning. And President Bush never said, ‘Well, I just lost Tom Brokaw. I guess I’ve lost the war. Just lost Dan Rather. I guess we’ve lost the war. I just lost Peter Jennings, just lost Charlie Gibson.’ The difference is, I’m here during the Iraq war, and wasn’t there during the Vietnam War. There was no alternative media back then to counter this. There’s so, so, so many differences. I could go on, and on, and on. But the ones I’ve given you are primarily the most substantive.

RUSH: All right, Autumn, thanks very much. I appreciate the phone call. Just doesn’t seem right about this, but I can’t put my finger on it, and it’s not a big deal.