Run the Numbers: After the Bush Tax Cuts, the Rich Pay More Taxes

Listen To It! WMP | RealPlayer 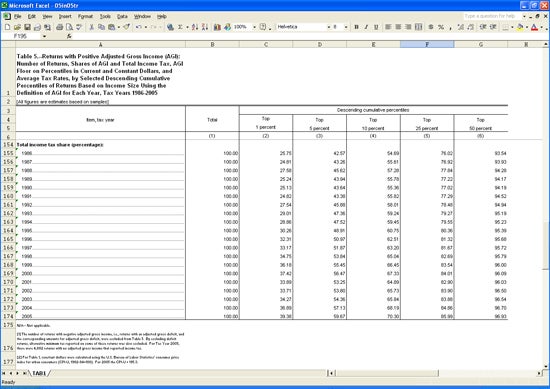 RUSH: Remember we ended the program yesterday with a story about a journalist professor, journalism professor now teaching at the journalism school at the University of Georgia. He’s a former reporter or journalist or something, and he wrote this piece in the Atlanta Urinal and Constipation, and he said the mainstream press, the Drive-Bys, have gotta start regulating blogs and talk radio and some of these other newfangled YouTubes, New Media, because it’s unregulated and it’s uncensored, and it’s not edited and it’s irresponsible and it’s not news, and the people doing it are not journalists. I’m sitting here stunned how this guy can literally claim that the Drive-Bys are fraud-free and abuse free, with Dan Rather, with blowing up trucks on Dateline NBC that otherwise wouldn’t blow up, with setting people up to act in ways they otherwise wouldn’t. It’s a crazy charge. I give you another illustration of the fraud and the abuse that they are still passing on. These alleged professional journalists. They still pass on the fraud. They still pass on abusing the truth. How many times can they ignore truth and reality and hard data?

They do it every day in the economy, for example. They are loath to tell you the truth about the state of the economy in this country, and they continue to pass on the myth and the fraud. They perpetrate the fraud by passing on the myth that the rich are getting richer and the poor are getting poorer, and the Bush tax cuts really gave massive tax relief to the rich. All you gotta do is go to my website and look at who pays what share of the federal income tax bite, and you find it’s not true. Anybody can look it up! It’s IRS data. You can find the data anywhere. They will look at it. It doesn’t fit the narrative, doesn’t fit the template, so they don’t report it. That’s fraud! Journalistic malpractice. That’s abusing the truth. Yesterday’s Wall Street Journal updates the tax numbers. Before the Bush tax cuts, the top 1% of wage earners paid 37% of all income tax revenue. Now, after the Bush tax cuts, the top 1% are paying 39% of a total income tax bite. That’s a 2% increase in the share of total taxes paid by the rich, the top 1%, since the Bush tax cuts went into effect. By the same token, before the Bush tax cuts, the top 5% paid 56% of all income tax revenue. Now the top 5% are paying 60%, after the Bush tax cuts. Now, you might be saying, ‘How does this happen, Rush?’ It’s simple. You have to stop looking at things as a zero-sum game. You have to look at the dynamic results of what tax cuts cause. They cause more jobs. They create more wealth, and as more people gain wealth, they move into these higher tax brackets. There are more people in those brackets, therefore the aggregate income tax collected goes up. They are paying a bigger portion, which, you know, generating revenue to the Treasury is what this is all about. But it’s really not, see, because of the Democrats and the Drive-Bys, it’s about control. It’s not about raising revenue.

CALLER: Earlier you were talking about the whole tax issue and tax cuts growing, the income and whatnot, and what never really ever gets talked about is small businesses and small business, as we all know, is the backbone of the employers out there. And most all small businesses, be it the dry cleaner in your hometown or a car dealer, are either sole proprietors or sub-S corporations or limited liability corps. And they all pay taxes at the personal rate, and those business owners — and I work in the automobile industry, and I’m a district sales manager, and I’ve called on car dealers that had two employees, and I’ve called on dealerships that have had 200 employees, and they all pay at the personal rate, and some of that money that they earn obviously is what they live off of, but a lot of it gets reinvested back into their business to buy equipment, to expand their business, and hire new employees. And so when the Democrats stand up there and talk about how they’re going to tax, you know, want to get more tax out of people that make whatever the dollar amount that they’re quoting, 150 or 200 or a thousand or more, they’re talking about, you know, the people that employ all the lion’s share of the people out there.

The percentage of income taxes paid by the top one and top 5% have gone up dramatically in both categories, after the Bush tax cuts. The reason for this is easy. You can’t look at this stuff as a zero-sum game. There’s dynamics. You lower taxes, and all kinds of great things happen. New jobs are created; more productivity occurs. More wealth is created. People do get richer. They move up in tax brackets, and so there are more people in those brackets, and you are raising more money for the Treasury and the government at large, which everybody thinks is the point, which it isn’t. As far as the liberals are concerned, it’s control. Now, the sub-S business, subchapter S, sole proprietors are allowed to file their business return on their personal income tax return, and that means they’re paying the personal tax rate on a business — and those are people, small businesses, are (it’s a cliche, but it’s true) the backbone of America. Small business hires vastly more than big corporations, and they end up being targets — and not just of taxes. They end up being targets of overzealous regulatory agencies and others who want to penalize them, and punish them for their success. It’s a vicious cycle. The successful are always going to be targets of liberals and Democrats.

RUSH: Bob in Houston, you are next up on the EIB Network. Hello.

CALLER: Couple of quick points, one on the story about the sports cars. I’m proud to say my wife admires me for driving a 450-horsepower sports car that gets 12 miles per gallon.

RUSH: (laughing) What kind of car is that?

RUSH: It’s 450 horsepower. I’m having so many audio problems here today. I apologize to you. Everything is sounding very muffled today and I’m trying to fix it so I apologize. A $450,000 Audi. I’d never heard that.

CALLER: Anyway, my point that I called on was getting back to the top 1% of the taxpayers. You mentioned that it was a 2% increase. That’s an increase in their share. If you have a fixed revenue coming into the Treasury, then that would be actually a 5% increase in the dollars they’re paying, and we’ve all acknowledged that the revenues to the Treasury have increased. I don’t know what the numbers are, but let’s say 10%, then the the top 1% are really paying, you know, somewhere around 15% more dollars to the Treasury.