Why Gov. Huckabee Distances from Bush

RUSH: Here’s David in Atlanta. You’re next on the EIB Network. Hello, sir. 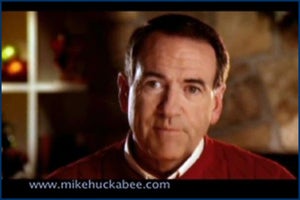 CALLER: Rush, I’ve got to give you credit once again. I think your astute analysis is what’s behind, at least for a large part, Huckabee’s recent swipe at George W. Bush for not pulling something like the surge sooner. When you said that you think the liberals paint Huckabee as another Bush, so they can run against Bush again — not that he is exactly, but they’re trying to paint him that way — I think you were dead on.

RUSH: Well, there’s no question that the influence of this program spreads far and wide, and it impacts in ways that we will never even know. So you could be right. It could well be that Huckabee or Huckabee’s team heard the theory — which I do not retract, by the way, I think the theory is sound — they’ve invested so much in the Democrat side, in their base, the lunatic fringe bunch on the blogs. They’ve invested in so much hatred for Bush that they need Bush on the ballot, and they are not going to get Bush on the ballot unless they can turn one of the Republican candidates into Bush, with of course the aid of the Drive-By Media. So Huckabee, I think, fits the bill. I mean, Bush touts his faith publicly, Huckabee does. Bush! Illegal immigration? He’s got pretty much the same laissez-faire attitude about it that Bush does. So could well be that Huckabee took some steps.

RUSH: Now, the Christmas ad, you know, the ad that Huckabee ran that’s got what people are getting is a floating cross in there, and it’s a Merry Christmas ad. It mentions the birth of Christ. The Drive-Bys, oh, orgasmed on this one, folks! They really did. Drive-Bys said, ‘Whoa, this is such a brilliant ad! Why, this is really great!’ Normally when a Republican political candidate starts talking about… He doesn’t even have to mention Christ. Just say God. Just say faith and the Drive-Bys and the libs have a cow! They go nuts. ‘Separation of church and state!’ They start talking about theocracies and all this. So why, when Huckabee runs this ad and mentions Christ, and says ‘Merry Christmas,’ says he wants to get away from all the balderdash of political ads, and has a little floating cross in there, why are the Drive-Bys so excited? That’s because they want him to win.

‘Oh, is this guy going to be easy!’ (laughing) Because see, the way they think, the way the Drive-Bys think, if Huckabee gets the nomination, then the Drive-Bys and the Democrats think with one person they can destroy the whole Christian right, by having that candidate go down in flames — and make no mistake. I don’t know that they would succeed, because I think they constantly underestimate the pow-ah of the Christian right, but that’s their game plan. So anyway, Huckabee is being asked to talk about this ‘floating cross’ aspect. He said, ‘It wasn’t a cross; it’s a bookcase! It’s just bookshelves.’ So he’s on the Today show today. Meredith Vieira says, ‘In this ad you are say people should be celebrating the birth of Christ while the shape of a cross appears to take shape behind you, and that has led some to say that this is another overt religious appeal to voters. What do you say about this ad and about those criticisms?’

HUCKABEE: That floating cross is a bookshelf, Meredith. We were all amused — the production crew I think probably more than anyone, who put the spot together — and, frankly…

VIEIRA: So you didn’t see that image when you — when you put the spot together, that it might be confused?

HUCKABEE: Absolutely not! I would love for you to interview the crew. They would find this incredibly amusing. People are looking for anything in the world. It’s almost like it’s so politically incorrect to say ‘Merry Christmas’ anymore, and I find this pretty amazing. I mean, somebody’s probably going to figure out that as I was blinking my eyes, I was saying some special code — Morse code — and telling people a subliminal message. I mean, it’s just beyond ridiculous.

HUCKABEE: You can’t even say ‘Merry Christmas’ without people getting all sensitive about it.

RUSH: Vieira then says, ‘You’re sounding like you’re a little fed up with some of the criticisms that have been leveled your way.’

HUCKABEE: It’s not fed up.

HUCKABEE: I am just amused. I totally am amazed that people are so sensitive these days. I mean, for example, I bet you and even David Gregory are going to get off next Tuesday because it’s Christmas. We celebrate Christmas!

RUSH: Vieira then says, ‘Before I let you go, The National Review’s Rich Lowry has said that, quote, ‘It would represent an act of suicide’ by the party if Republicans nominated you because he says you’re underprepared and under-vetted. One thing to win in Iowa, but what makes you convinced that you can win a national election?’

HUCKABEE: The Wall Street-to-Washington axis, this corridor of power, is absolutely frantically against me. But out there in America the reason that we’re number one in the polls is because I’m the guy that doesn’t have some offshore mailbox and bank account in the Caymans hiding my money. I’m the guy that worked my way up through it, and there are a whole lot of people in America that believe that the president ought to be a servant of the people and ought not to be elected to the ruling class.

RUSH: Now, you might be asking yourself, ‘What’s he talk about, offshore accounts in the Caymans?’ Well, he’s talking about the Clintons. We had the story yesterday, but Clinton is associated with Ron Burkle. He has a lot of offshore, out there in the Caymans, and if Clinton does, Hillary does, because they’re husband and wife. Assets, if not much else, they’re joined at the hip. Right, and Edwards, the Fortress bunch foreclosing on all the poor people that Edwards worked for. They’ve got some offshore accounts too. That’s what Huckabee is referring to. For all I know he might be referring to Mayor Bloomberg. So one more sound bite. Meredith Vieira says, ‘So, governor, why do you think they’re opposed to you? Why do you think they’re opposed to you, governor?’

HUCKABEE: (b-roll) Because they don’t control me. I’m not one of theirs. I’m not one of those guys that just owe my soul to the people on Wall Street. I’m not a wholly owned subsidiary of them. There’s a sense in which all these years the evangelicals have be treated very kindly by the Republican Party. They wanted us to be a part of it, and then one day, one of us actually runs and they say, ‘Oh, my gosh! Now they’re serious.’

RUSH: Well, I think he’s on to something there, but I would also remind Governor Huckabee that George W. Bush is president, and while he doesn’t call himself a member of the ‘Christian right,’ he has made no bones about the importance of his faith and refers to it quite a lot — and that is one of the reasons that they hate Bush. Mark my words.

RUSH: Roger in Indiantown, Florida, you’re next on the EIB Network. Hello, sir.

CALLER: Hey! I’m your future favorite caller, by the way. I just want to tell you that real quick. Hey, I wanted to tell you, I was all for Huckabee. I’m a devout Christian. I was a minister, and I was reading these articles like in American Thinker, I’m going, ‘Oh, my God, I can’t support this guy,’ and I’ve come to the conclusion —

RUSH: What, wait, wait. What story in the American Thinker? Did you happen to read —

CALLER: It was off website. I printed it up. ‘The Huckabee Hustle’ is what it’s called.

CALLER: And I’ve been reading a lot of things like this, and I’ve come to the conclusion that just because somebody’s a Christian doesn’t qualify them to be president, and you know, we all want to do the right thing —

RUSH: Well, but it does. See, it does with some. That’s the thing, and it’s not so much… My theory is that the attachment that, quote, unquote, ‘evangelicals’ and the ‘Christian right’ might have with Huckabee is not because, ‘All right, here’s one of ours!’ I think these people — and they have every reason to believe this — think that they’re on target to be marginalized. I mean, the Democrat Party has made no bones about the fact that they hate ’em and resent them, and they want to try to destroy them as a political power and so forth. So somebody that comes along that represents their values in important social areas, it forms a bond. I think that’s partly the explanation for it here. So to some people, it would matter that a Christian or a minister, as you said, is — somebody that’s a Christian doesn’t qualify them to be president, some people’s mind it does.

CALLER: I believe one of the things that made Reagan such a great leader is because of his Christian values, but he was ruled by principle, conservative principles, which are very biblical. But some of the stuff that I’m hearing from Huckabee doesn’t line up, and it’s scary to me. My wife’s all for him, and I’m backing off now.

RUSH: Well, that’s interesting. What are some of the things you’re hearing that you don’t like? Like immigration?

RUSH: Yeah. Well, in the case of Huckabee, you have the open borders question. The thing that I think he’s going to have to pay attention to here, as it relates to his open border problem and his immigration policies as governor of Arkansas — and the things he’s already said about children of illegal immigrants being afforded health care and all kinds of welfare benefits in this country because we’re a compassionate country — you gotta understand that the first job of a president, the oath of office, whatever else it is, is: ‘defend and protect Constitution and the country from the nation’s enemies.’

RUSH: That’s something people take very seriously. You can talk about the economy. You can talk about any number of issues that supposedly take people and move ’em to the polls. But even if they won’t state it in preference polls, even if they won’t tell you when you ask ’em why they voted the way they do, at the front of every serious voter’s mind is: ‘Is this candidate going to protect the country?’ Why do you think McGovern went down and lost in a massive 49-state landslide? One of the reasons that the haughty John Kerry had problems, is because he was going to farm out national security to the UN, ask for global permission or whatever it was: ‘global test.’ This is not what a majority of serious voting Americans look for in a president and this is something that Governor Huckabee is going to have to shore up if things go well for him in Iowa and in New Hampshire.