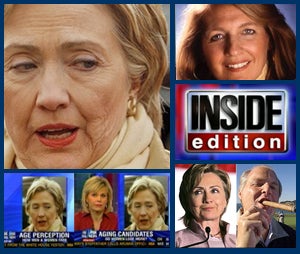 RUSH: Do you realize this is Day Four of the Hillary photo-inspired brilliant monologue by me on Monday, and the Drive-Bys are still not letting it go? Their reporting is getting worse on this. Ellen Goodman has a funny, funny Boston Globe column today on this. They discussed it at Fox &amp; Friends on TV this morning, and some female info babe in an Australian paper has written really just a snitty little piece. It’s funny. You know, you people, Ms. Goodman, the rest of you in the Drive-By Media. It’s time to learn something: It’s my world; you just live in it.

RUSH: I think Ellen Goodman, columnist at the Boston Globe, is a stalker, ladies and gentlemen. She is stalking me! She listens to every word of my show and she has written a piece that actually ran in the Cincinnati Post, today. Her column normally appears on Fridays in the Boston Globe. This is a send-up on my brilliant monologue of Monday, and as the week has gone on, as the Drive-Bys have discussed this more and more, they have veered further and further away from the point that I was making. The reporting is getting worse. Here is how Ms. Goodman begins her piece: ‘And so we gather to praise the old feminazi hunter himself. Rush Limbaugh has single-handedly brushed aside the blinding snow on the windshield and let us have another clear view of the double standard running down this campaign highway. This week, our man Rush offered a lengthy monologue about an unflattering photo of Hillary Clinton in the New Hampshire cold. He ended by asking the question: ‘Will this country want to actually watch a woman get older before their eyes on a daily basis?” See, this is… I know how to play these people. The brilliant monologue, which you all heard; then you give ’em the pull quote. (laughing) That little last line, that’s all they’re going to see, and they’re gonna focus on and I’m going to own the news cycle for a week! This is day four!

‘Hillary has wrinkles! Somebody call the exorcist! Remember last summer when the nation was treated to a bit of fashionbabble about Hillary’s cleavage? This alerted us to the startling news that the senator had breasts. Two of them. News at 11. Now we are being treated to a psychodrama titled ‘The Candidate Has Crow’s Feet.’ Let me stipulate that the photo was not one she’d put on Match.com.’ She goes on to describe Hillary; some self-deprecating comments she tried to make. ‘The now-infamous photo ended up on the Drudge Report with a caption reading: ‘The Toll of a Campaign.’ Rush then picked up the old bat, I mean, baton, and ran off (at the mouth) with it. The svelte and charming 56-year-old talkmeister framed his words about the 60-year-old Clinton who is ‘getting older before our eyes on a daily basis’ as a cultural comment. He bemoaned the reality of a country ‘addicted to physical perfection.’ He cited the laments of aging actresses. He oozed special sympathy to women, since older men look ‘more authoritative, accomplished, distinguished.’ Do you believe that this was a pro-woman rant? Then you also believe that Limbaugh’s routine about Hillary Clinton’s ‘testicle lockbox’ is a paean to female leadership qualities.’

Look at what we’re getting out there now! (wild laughter) Well, it upsets them so much because it’s true. It’s what I said the other day. There are certain truths you’re just not supposed to utter. Some people don’t want to be confronted with truth. There’s a lot of unfairness out there. We can talk about some unfairness, but we can’t talk about others. Hey, Snerdley! If you think this is good… So in one Boston Globe column, we got ‘feminazi,’ we got ‘testicle lockbox,’ and we’ve got the other things that I said during the monologue. Cindy Adams. I was at a cocktail party on Tuesday night at Georgette Mosbacher’s, and tons of people there. Cindy Adams of the New York Post was there, and we ran into each other in the big living room at Georgette’s place, and she asked me about the campaign. I said, ‘Well, I don’t understand this fear of Hillary everybody has. She puts her pants on one leg at a time like every other guy,’ and Cindy Adams printed that today, Snerdley! (laughter) So for the Drive-Bys, as I say: It’s my world; you just live in it. Four days — four days — and this was purposefully done, ladies and gentlemen. Back now to Ellen Goodman.

‘Meanwhile, it’s become retro, maybe even feminazi, to notice the teensiest whiff of sexism. Hillary was accused of playing the gender card for merely mentioning that presidential politics was an ‘all-boys club.’ … So when Limbaugh talks about the older woman as a kind of Doriana Gray … we are required to acknowledge the talk of John Edwards’ hair and Barack Obama’s swimsuit. Not to mention the grimacing Giuliani and the robotic Romney. Well, we do notice what both genders are wearing. But we have not yet passed the Equal Right to Be Scrutinized Amendment. Haggard still comes from old hag, which comes from witch, which rhymes with you know what. If Romney…’ (laughter) Look at all that Ellen Goodman is assigning to me! See? I’m this dastardly manipulator out there knowing exactly what I’m doing. Because, see, in their world, what I’m doing, is I want Hillary. I want Hillary. The Democrats think I want Hillary in the White House for four years or eight years to really make my show good, and so they think that I know that the way to get Hillary elected and nominated is to make fun of her or to criticize her, thereby creating sympathy and people who otherwise would not vote for her will do so just to spite me. That’s what they think my diabolical scheme is, when I have no diabolical scheme!

I don’t scheme. I tell the truth here. I’m an open book. My show is on for 15 hours a week. You don’t have make up conspiracies of what happens here. ‘In phase one of this campaign, Hillary was the experienced candidate. No gender need apply. In the last tense stretch to the first primaries, the headlines tell us she’s being humanized, which is a political synonym for ‘feminized.’ When Hillary campaigns with her family, the media sometimes react as if she found Dorothy Rodham at Rent-a-Mom. So it bears repeating, alas, that women still have to negotiate the Scylla and Charybdis of political life. If you’re seen as an authority figure, you aren’t seen as womanly; if you’re seen as womanly, you aren’t seen as an authority figure. By the time you tack through that narrow channel, you have … wrinkles!’ and then she challenged me. ‘What a business this is. Come to think of it, maybe I’d prefer that bathing suit photo op. Only Rush, ol’ buddy, you go first.’ Ellen, I love it. That’s a funny piece. It’s really well crafted. This is well crafted. It really is. I gotta give you credit. But it’s not about me wearing a bathing suit, not about me claiming there is or is not a double standard. It is what it is. It’s what I said. (interruption) Because it’s me. They won’t address the premise that is a cultural thing going on in the country, because I said it first, Snerdley.

It’s like I advised the Channel 2 reporter the other day: ‘Get a crew, go out on the streets of New York, and tell random people on the street, ‘Rush Limbaugh says the sky is blue,’ and see what they say. They’ll probably say, ‘Well, maybe so, but he’s an idiot! Well, what does he know? Why should we care what he thinks?” If I say it, they have to dispute it. Now, Maureen Dowd and some others have understood, and the gals on The View got it right. Now, if you think that’s funny, listen to this little blurb here from an Australian newspaper at News.com.au. ‘As Australians slack off ahead of Christmas, stories from the US dominated the top ten this week. Right-wing shock jock Rush Limbaugh … launched a tirade over a particularly unflattering photo of Hillary Clinton. Limbaugh, former painkiller addict, [laughing] staunch supporter of the tobacco industry, who said the troops involved in torture at Abu Ghraib were ‘just having a good time,’ [laughing] and that it’s no different than what Madonna or Brittany do on stage — yep, that guy — anyway, using this one bad photo, Limbaugh asked whether America wanted to watch a woman grow old before their eyes? Because men, of course, don’t age: they just become distinguished, said the balding and overweight Limbaugh.’ (laughing) These people do not know how much I enjoy this. ‘If we’re going to use every silly photo that’s ever taken (personally, my face looks like it’s melting if I’m photographed talking), then why not use this one,’ there’s a picture I didn’t bother clicking to, ‘and say she’s a Nazi sympathiser? While you’re here, check out this cool thing we’ve put together using George Clooney and Adam Sandler…’ She goes on to the next topic in her little column, and then audio sound bites. This was last night on Inside Edition. This is the program hosted by Deborah Norville. Here is a portion of the reporter’s report, Les Trent is his name.

TRENT: This picture of Hillary Clinton is causing a furor. It inspired this unflattering comment by conservative radio host Rush Limbaugh.

RUSH ARCHIVE: So the question is this: Will this country want to actually watch a woman get older before their eyes on a daily basis?

NORVILLE: But the photographer who took the picture says Mrs. Clinton looks radiant in other shots taken just moments later.

RUSH: And then this morning on the Fox News Channel, Fox &amp; Friends, they’re discussing all this, Steve Doocy and Gretchen Carlson along with Brian Kilmeade.

DOOCY: — put this picture right here of Hillary Clinton, and the headline said, ‘Toll of a Campaign.’ That same day, Rush Limbaugh on his wildly successful radio show was talking about, he said, quote, ‘Will this country want to actually watch a woman get older before their eyes on a daily basis?’ He said, ‘Men aging makes them look more authoritative, accomplished, and distinguished.’

CARLSON: I disagree with that.

DOOCY: ‘Sadly, it’s not that way for women, and they will tell you.’

CARLSON: I — I think the same thing could be said for a lot of the candidates for president who are of the male persuasion. Some of them are looking pretty old to me.

KILMEADE: Right. But are we willing to say, ‘That guy is old and distinguished,’ or do we look at this woman and say, ‘She’s too old’?

CARLSON: Oh, I think there are a lot of stereotypes, uh, that any woman would face running for president. It doesn’t matter what side of the aisle you’re on — on politically. I mean I think we talk in general more about what Hillary wears. We talk in general more about how she looks, and the same thing could be said for any woman in any profession. I think that’s just the way that we are.