LIMBAUGH: Actually, to me the big story is on the Democrat side. I don’t think this is unexpected on the Republican side.

SMITH: I want to talk about this first, if we can.

But, he’s not going to have that kind of base in New Hampshire. He’s got a strong McCain fight there and he’s not going to take on McCain. He was on the Tonight Show the other night, he’s honored McCain, he’s not going to be critical of McCain at all and so it’s at least — what he said last night and the way he’s been handling himself about McCain up to now is any indication. But, I think the Republican race is long, long to be decided.

VAN SUSTEREN: Rush, it’s Greta. Which candidate do you like and why?

LIMBAUGH: I’ve stayed out this up until now. I haven’t chosen a candidate, haven’t picked one. You know, I’m a rock-ribbed conservative, as everybody knows, and I don’t think — everybody’s talking about Reagan this and they’re Reagan that, I saw you guys earlier tonight asking Governor Huckabee about — I think Laura was asking him about his Reagan credentials, he doesn’t have Reagan credentials. Very few of the Republicans do. And so it’s sort of a circumstance where you’re not going to get everything you want here because very few of the candidates come close. There’s some that do, more so than others.

INGRAHAM: Rush, isn’t it true, though, that we — we, and I’m not putting myself in your category, believe me, I’m smarter than that, but that some people out there, and I think I’m of them, are missing the boat here about what people are feeling about Huckabee. I mean, I don’t think he’s a Reagan conservative on a lot of issues, I think he’s really effective and he’s an interesting guy and he’s very smart, but I don’t think he’s a Reagan conservative.

But people are really anxious about this economy and they like how he’s talking about the economy and they like what they’re hearing from him. And I think that is a cause of concern for Republicans and obviously it’s not over yet. But, that’s clearly a sentiment out there that I think a lot of people didn’t predict.

LIMBAUGH: Well, I don’t — I haven’t underestimated him at all, and again, I don’t want to be repetitive, but it was back in early November that I started detecting an uptick in his movement in the polls and I asked what if he gets the nomination? Now, you know, Governor Huckabee is — you know, you talk about people underestimating him and the angst that exists in the country. There’s a Pew poll that came out on New Year’s Eve, 84 percent of the people, Laura, are immensely satisfied, a clear majority, greatly satisfied with their lives. What is this angst? I think — I think this angst is Drive-By media made up.

ESTRICH: Can I ask you a question, Rush?

LIMBAUGH: I think there is some out there, but it’s not nearly as — if you’re trying to talk, my hearing, I don’t mean to be talking over you if you’re interrupting — but I just think that 70 percent of the same people say the country’s going in the wrong direction. Now, how do you balance that? You have to balance it by what – there is a trend in the news media today, we can get a story that there has been a cure for cancer and it would have four experts saying it may be bad news. We can’t rely on the good news. Good news is simply not allowed in this country today, based on current media trends, FOX NEWS excluded, of course. And I don’t think that there is this much angst, individually.

I think a lot of people think a lot of other people are hurting, the subprime crisis and all this and these attitudes manifest themselves in the form of perception sometimes equaling reality, but if you get down to brass tacks and talk to people individually, they’re not hurting. Ninety-six percent of the American people are paying their mortgages, we’re not nearly as desolate, destitute. Edwards made the country sound like 1920’s Louisiana, tonight.

ESTRICH: Rush, let me ask you…

LIMBAUGH: Now, Huckabee is — I think he’s tapping into a sentiment here that people just like a straight talker, or somebody who appears to be, who is from outside Washington, who is outside the beltway who’s not part of the political elites in Washington, or in New York. He’s making great hay with this New York-Washington axis comment, but this is all going to shake out. We’re going to have many fewer candidates in these next debates and that’s going to clear a lot of things out. This has a long way to go.

ESTRICH: Rush, I have a question, it’s Susan. How are you?

LIMBAUGH: I’m fine. Is this Susan, did you say?

ESTRICH: Yes, it is.

LIMBAUGH: Susan, you look great. I have to tell you.

ESTRICH: Thank you, darling. What happens tomorrow when Mike Huckabee calls and tries to make up with you? You’ve been critical of him in the past; you’ve been tough on him. If I were Mike Huckabee, tomorrow morning I would call Rush Limbaugh and try to make nice to you and your audience. What do you do when that happens?

LIMBAUGH: Well, um — it isn’t going to happen. This little thing that happened before Christmas with this blog that happened on the Atlantic Monthly with one of his advisors supposedly saying that, you know, I’m not an independent thinker, and I’m part of the D.C./New York axis, and so forth. He was asked about it and he said: ‘Well, I would love for Rush to call me. I don’t have his number. I don’t know how to get hold of him.’ And his campaign people in Arkansas know full well how to get hold of me. And he did, last Sunday, sent me an e-mail, it said, ‘The last thing I want to do is pick a fight with you.’ But, he said something very interesting, ‘I don’t know what was said and I don’t know who said it, so I can’t respond to it.’

Well, it was four days after what was said, he has to know what was said, and he could have responded to it anyway. I don’t think he will. I actually think that a portion of the Huckabee campaign doesn’t mind the fact that some of us are opposing him. I think they think that it will help him with his base. I wouldn’t expect him to try make peace.

SMITH: Rush Limbaugh on the phone. Hey, you know what? One thing I was going to ask the panel here, Rush, and maybe you can weigh in on this, as well. I guess there are a couple of things when we talk about the Democrats. Obama’s message seems to be hope, Edwards’ message seems to be the middle class. What kind of message does Hillary Clinton have to pick up to get the kind of enthusiasm that Obama seems to have around his campaign?

LIMBAUGH: I’m glad you asked that because this is what I originally wanted to say. I was watching all the networks tonight, channel surfing around, and I honestly, this is an historic night in this country, folks. For the first time a black American has won a presidential primary going away by nine points. Now, I’m not going to mention the networks, but without exception, other than yours, it was Huckabee, Huckabee, Huckabee, Huckabee. They were doing their best to bury what was a devastating and humiliating loss for Hillary Clinton. This was the worst night of her life other than maybe some nights during the second term during the…

ESTRICH: Oh, I think, Rush, there were worse nights, don’t you? 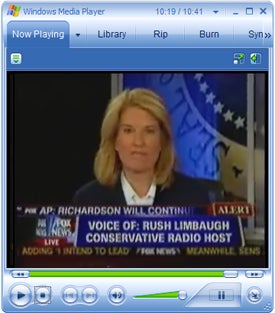 VAN SUSTEREN: Here’s the thing that I’m — and I keep harping back to the 1988, the inevitable candidate, here in Iowa, you would think would have been George Bush, he’d been vice president of the United States, under President Reagan, who was loved by many in this country. He lost, I’m looking at the numbers right now, by almost 20 points, 20 percentage points to Bob Dole and he lost by six percentage points to Pat Robertson and ended up being the president of the United States. So, it’s while everyone is sort of harping on this one race, and it’s a huge win tonight for the two winners, it’s like, I just don’t see this as like such a ‘oh-no’ for the Hillary Clinton campaign. It’s more — it certainly is a wakeup call, like it was for George — [Vice] President George Bush, then.

So, I don’t feel the way that everyone else does on this.

LIMBAUGH: Well, I would draw a distinction in that I don’t think George H.W. Bush and his wife and their whole campaign team and their whole administration, prior to the Reagan administration, was running around with this attitude of arrogant inevitability like the Clintons have been running around. I think this is a wakeup call for them. I also think that President Clinton hurt her. If you take a look in any number of campaigns prior to tonight when the president, the former president went out and endorsed candidates, the vast majority of them lost.

Her tailspin began when he got off the airplane in Iowa and started running around making three-hour speeches about himself rather than her. I don’t think this is a good night for them. And you know, you like to go back to history and draw some parallels, if you want to do that, you should do the same thing about Huckabee and go talk about all the people that won Iowa who then faded later, but nobody is doing that about Huckabee. They’re anointing Huckabee tonight, and Susan knows exactly why. The Democrats are hoping and praying he’s the nominee for one reason.

LIMBAUGH: I’ll tell you what it is, Susan, I know exactly what it is. The left-wing in this country is terribly fearful of Evangelicals, the Christian right. They would love to find a way to neutralize them. You nominate a guy who represents them and take him out, you take out the whole Christian right, once and for all and you don’t have to worry about them. And I know that’s why you want Huckabee.

SMITH: Got to go, Rush. Thanks for the call in, appreciate it.