RUSH: Let’s move on to some Republican sound bites. This was fascinating. This was last night after the Republican forum on Fox. Frank Luntz — Republican hotty, by the way. You would be amazed at the number of Republican women that think Frank Luntz is hot. I mean, they’re dying for Frank Luntz. Frank, you should know this, if you don’t. I’ve heard from three or four of them. He talked with New Hampshire voters in a focus group in a restaurant after the forum last night. He said, ‘First off, show of hands how many of you walked in here without a committed candidate? Raise your hands.’ Virtually everybody walked in without a committed candidate. ‘How many of you walked in here supporting Romney, raise your hands? How many of you are going to leave here supporting Romney?’ Nobody. Maybe a couple hands went up. For the first question, practically everybody’s hand went up supporting Romney in the second question. ‘What is it that’s so overwhelming?’ Luntz asked the group. ‘What is it with Mitt Romney that he did today?’

FEMALE NH VOTER #1: I think that he showed his qualities as an individual being a very strong leader, with very strong moral background.

MALE NH VOTER #2: His statement on pro-life, his — he came through with conviction, where a lot of the other candidates did not.

LUNTZ: Who did come through with conviction?

MALE NH VOTER #2: He waffled on the first question at least three if not four times, couldn’t come forth with a truthful answer.

LUNTZ: How many thought Huckabee waffled on the first response? Did that have an impact on how you felt about him afterwards?

MANY NH VOTERS IN CROWD: Absolutely.

LUNTZ: This is important because people formulate their points of view, their opinions, even within the first five minutes of the debate and if you make a blunder at the beginning then they got a problem with you at the end.

RUSH: That’s Frank Luntz. He also went on in this and asked about all the candidates, and it was clear that in these people’s minds, Romney won the night. They didn’t like Thompson at all, which kind of surprised me because I thought it was Romney and Thompson last night that did the best. One person said, ‘Look, we’re not Iowans, and I’m not voting for a pastor here. I’m voting for a president,’ when asked about Huckabee. But as I just said: people in New Hampshire may not know who a real conservative is based on the new definition that I have now recently admitted to having seen the light. Now, what was this first exchange in the debate that these focus groupers said that gave them problems with Huckabee? We’ll play the answer after the break, but Chris Wallace’s question: ‘According to our study, during your time, ten years as governor, you raised taxes, a net increase of half a billion dollars. So does Mitt Romney have a point when he talks about your record as a tax-cutter?’ The bite runs about 59 seconds, and it features an interchange between Romney and Huckabee.

RUSH: All right, the Luntz focus group said that Huckabee blew the first question. They didn’t like it; They said that he didn’t answer with conviction; that he waffled on the first question at least three or four times; couldn’t come forth with a true answer. Here’s the question from Chris Wallace: ‘According to our study, Governor Huckabee, during your time, ten years as governor, you raised taxes, net increase of a half a billion dollars. So does Mitt Romney have a point when he talks about your record as a tax-cutter?’

HUCKABEE: Government’s supposed to work. It’s not about the politics of saying, ‘I never raised a tax.’ It’s about saying, ‘I made government work.’ And the fact is there were specific issues that I’ve been attacked for, sometimes pretty brutally, on some of these television spots, but I’m proud of the fact that I governed and lowered taxes and did something that had never been done in my state, and did it against the headwinds of a Democrat legislature that had never done it in 160 years before.

ROMNEY: Facts are stubborn things. I think, Mike, you agreed that net-net, you raised taxes by half a billion dollars. Is that right? 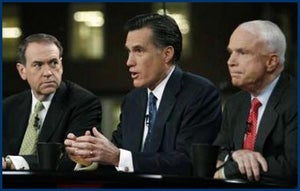 HUCKABEE: You know, Mitt, let’s talk about how stubborn the facts are.

HUCKABEE: The fees I think you raised were more like half a billion dollars, not $240 million. You came into office–

ROMNEY: Mike, I asked you a question.

HUCKABEE: — with a deficit, and you left with one.

HUCKABEE: You opposed those Bush tax cuts in 2002.

ROMNEY: You know, Mike, you make up facts faster than you talk, and that’s saying something. So let’s slow it down and let’s get the facts correctly.

ROMNEY: I asked you a question to begin with, and that was, net-net, did you raise taxes in your state by half a billion dollars?

HUCKABEE: We raised jobs. We rebuilt our roads–

RUSH: Populist political speak. ‘We raised jobs. We rebuilt our roads.’ The exchange continued this way.

ROMNEY: Now, let me go back to the question I’ve asked you that you’ve refused to answer three times. Did you raise taxes, net, in Arkansas, by $500 million?

HUCKABEE: By a court order that said we had to improve education. Maybe you don’t have to obey the court in Massachusetts. I did in Arkansas. And you know something? Education is a good thing for kids, because kids–