RUSH: Now, Judicial Watch. I mentioned this in the previous hour. They are the public interest group that investigates and prosecutes government corruption, and they released, I think it was yesterday, records obtained from the Clinton Library and Massage Parlor related to the national task force on Hillary health care reform, a cabinet-level task force chaired by Mrs. Clinton during the administration. Specifically, those documents came from the White House health care interdepartmental working group. Here are the highlights of the documents released by Judicial Watch. Listen to this. ‘A June 18, 1993 internal memorandum entitled, ‘A Critique of Our Plan,’ authored by someone with the initials ‘P.S.,’ makes the startling admission that critics of Hillary’s health care reform plan were correct.’ Now, this is somebody in the White House who has analyzed Hillary’s plan and is offering a critique of it. ‘I can think of parallels in wartime, but I have trouble coming up with a precedent in our peacetime history for such broad and centralized control over a sector of the economy. … Is the public really ready for this? … none of us knows whether we can make it work well or at all…’ This is somebody in the administration, a task force designed to analyze their own plan. 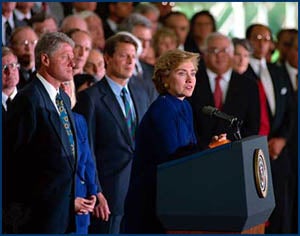 Here’s the next thing: ‘A ‘Confidential’ May 26, 1993 Memorandum from Senator Jay Rockefeller (D-WV) to Hillary Clinton entitled, ‘Health Care Reform Communications,’ which criticizes the Task Force’ — Now, the task force is the group that said, ‘This is too big.’ So Rockefeller, knowing of the memo in the White House, criticizes the task force ‘as a ‘secret cabal of Washington policy ‘wonks” that has engaged in ‘choking off information’ from the public regarding health care reform. The memorandum suggests that Hillary Clinton ‘use classic opposition research’ to attack those who were excluded by the Clinton Administration from Task Force deliberations and to ‘expose lifestyles, tactics and motives of lobbyists’ in order to deflect criticism. Senator Rockefeller also suggested news organizations ‘are anxious and willing to receive guidance [from the Clinton Administration] on how to time and shape their [news] coverage,” of the Hillary health care reform plan.

Now, Rockefeller sends this memo to Hillary saying, ‘Here’s how we’re going to deal with the people trying to stop you. We’re going to expose their lifestyles with opposition research. We’re going to expose their tactics and their motives of lobbyists and so forth.’ This is a double-dip. It’s bad enough that somebody in the White House suggested, ‘This plan is so big, I’ve never seen anything like this even in wartime. I don’t know that we could do it, I don’t know if the American people want this.’ There are people in the administration that were upset about this. This is massive! Rockefeller was trying to shut them up. He was going even one better, ‘All right, you don’t like it, we’re going to go after you, too.’

Then there is ‘A February 5, 1993 Draft Memorandum from Alexis Herman and Mike Lux detailing the Office of Public Liaison’s plan for the health care reform campaign. The memorandum notes the development of an ‘interest group data base’ detailing whether or not organizations ‘support(ed) us in the election.’ The database would also track personal information about interest group leaders, such as their home phone numbers, addresses, ‘biographies, analysis of credibility in the media, and known relationships with Congresspeople.” What we are treated to — and these are White House documents, by the way, that somehow Judicial Watch got, the Clinton Library and Massage Parlor — what we are discovering is what many of us have long known, slash, suspected that the Clinton, Inc., war room has no boundaries whatsoever and that they will use the full force and the power of the federal government against individuals who are not supporting what they want to do. They’ll do it by exposing lifestyles, threatening to do this, threatening to ruin them, harass them, find their phone numbers, their addresses, get their biographies. Think 700 FBI files.

Now, ‘These records released by Judicial Watch were obtained from the approximately 13,000 records made publicly available by the Clinton Library. The National Archives admits there may be an additional 3,022,030 textual records, 2,884 pages of electronic records, 1,021 photographs, 3 videotapes and 3 audiotapes related to the Task Force that are being withheld indefinitely from the public. On November 2, 2007 Judicial Watch filed a lawsuit with the US District Court for the District of Columbia against the National Archives to force the release of all the Task Force records. ‘These documents paint a disturbing picture of how Hillary Clinton and the Clinton administration approached health care reform — secrecy, smears, and the misuse of government computers to track private and political information on citizens,’ said Judicial Watch President Tom Fitton. ‘There are millions more documents that the Library has yet to release. The Clintons continue to play games and pretend they have nothing to do with this delay. The Clintons should get out of the way and authorize the release of these records now.” There’s no way, and this is exactly why.

Now, to me, none of this surprises me. The detail is stunning, to have Rockefeller involved here. I guess that shouldn’t surprise me, based on his attempts to sabotage victory in the Iraq war by trying to destroy the intelligence efforts with another famous memo of his. Look, Dingy Harry with this smear letter of me was much the same thing. Of course, that was not opposition research. That was just an attempt to intimidate my syndication partner into getting me to shut up. So the fact is that this is who Democrats are, this is what liberals do, and this has been one of the central themes of this program as I have spoken to you, the members of the tribe, for going on now 20 years to try to get you to understand who these people are. It’s much easier to watch Hillary Clinton in a debate or Bill Clinton lose his cool at a campaign event or an interview knowing full well what they’ve got in mind, as Mrs. Clinton tries to portray herself as just a harmless little person, a woman who wants the best for the children, who wants the best for the country, power mad. We keep hearing about bipartisanship and getting rid of the divides that exist in this country. The Clintons don’t care if there are divides. Whoever gets in their way will be destroyed, one way or the other. That’s the game plan. It’s been part of the playbook. It always has been. These documents at Judicial Watch just happen to give irrefutable evidence of it.