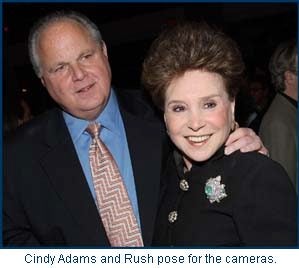 RUSH: I gotta tell you a little story. I got an invitation to attend a screening of an HBO made-for-TV movie. The screening was last night at the Time Warner Center. I went. I was invited by columnist Cindy Adams of the New York Post, which today, by the way, endorses Obama. This is after Rupert Murdoch has all these fundraisers for Hillary. Whooo. Anyway, that’s off the beaten path. Now, you can imagine an HBO screening in New York for a movie starring Susan Sarandon. She plays Doris Duke, the tobacco heiress, and the movie is basically about Doris Duke’s time with that butler, Bernard Lafferty. So I said, ‘Okay, I’m game. I’ll go.’ I show up and there are 150 people there, maybe a little bit more, and there’s a little cocktail party in the giant room before we’re ushered into the screening room. It was the usual New York entertainment and literati crowd, a bunch of progressives, liberals, shall we say, many of whom I’ve known of but I’ve never met. 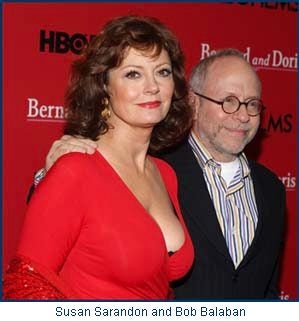 I didn’t talk to all of them, but, folks, they were amazingly forthcoming and friendly. I figure it’s because they finally saw a new face. They’d been going to these events for 20 years. It’s the same people they see four or five nights a week at these things. They saw a new face and said, ‘Whoa.’ I mean, Sandra Bernhard stared icily at me, but everybody else, I was blinded by the flashbulbs. Bob Balaban, he directed this thing, but Gosford Park, one of my all-time favorite movies, Bob Balaban was in it, was his story, Robert Altman, another far-left guy was the director of that movie. But if you saw Bob Balaban, H.R., you’d know who he is. I walked up and all these people were just nice as they could be, but, here’s the interesting thing, folks.I met Sir Harry Evans and Tina Brown, who I had not met before. They love McCain! All of these entertainment people here in New York love McCain. They just love McCain and they made it a point to tell me this. I didn’t bring up politics, they did. Yeah, they love McCain. Not too crazy about Hillary. Obama, yeah, they got some deep affection for. Oh, and they hate Romney. I don’t know why they hate Romney.

Everybody seems to hate Romney. I think they’re just jealous, you know, when that kind of hatred comes up. I think in McCain’s case he hates him because he runs ads that tell the truth about McCain’s record, but more interesting to me, why all these types love McCain. I figure it’s gotta be the POW story, they find that honorable, but I also think that they hate Bush, and McCain hates Bush, or McCain’s opposed Bush in a whole lot of things. Plus, McCain is on their side of the aisle a lot of times on issues. I also think, this is tough, because it’s all anecdotal, but a couple people made mention of the fact that they feel safer as Americans with a guy like McCain in the Oval Office in case there’s another attack, which does not bode well for Hillary.

So I think that’s part of it, too. But the funniest thing happened. We get there, and there’s a little bit of line, people getting rid of their coats and so forth to head in, and I happened to see, while she didn’t see me, Joy Behar. Now, wait ’til you hear this, Snerdley. (laughing) For those of you that don’t know, Joy Behar and I go way back. When I worked at WABC, when that was actually where we did the program from, from noon-to-three, Joy did a local New York show from a different studio at WABC from ten-to-noon. So we’re in there all the time, and there was no love lost. Not just because of politics, there just was no love lost. It was civil, but no love lost.

She asked me to appear with her as a guest on a couple TV pilots, one up in New Haven, Connecticut, and one I flew out to California for. I did it for peaceful coexistence, you know, supporting a fellow colleague, throwing politics out the window. So I saw her there with her boyfriend, a guy named Steve who’s been her boyfriend from back in the WABC days. She’s got a purse, she’s got this big coat and she’s trying to take it off, and my strategery here: Make the preemptive strike. So I walked over, I gave her a huge hug and a little peck on the cheek.

She has no idea who it is because I came up from her left side, she didn’t even see me yet. So I give her a little peck on the cheek, ‘Joy, how are you?’ and she starts sort of trying to push me away, then looks at me, and said, ‘What the hell are you doing here?’ And then we started talking and so forth. Now, she told a version of this on The View today that is not correct. She exaggerated. I’m not even going to bother playing it, but Regis Philbin was there last night and was an eyewitness, and he talked about it on his show this morning, and this is what he said he saw.

PHILBIN: Here’s what I saw with my own eyes.

PHILBIN: Rush Limbaugh, who came with Cindy Adams, I haven’t seen Rush in years, you know, he lives down there in Florida. There he is and when he saw Joy Behar — now, they are on two different poles of politics, do you know what I mean?

RIPA: Yes, they are.

PHILBIN: He’s a conservative. She’s a liberal. He went over, took her in his arms.

RIPA: In his arms?

RIPA: (gasping) And what happened next?

PHILBIN: And I must tell you, so I go up to Joy Behar, she said, ‘He gave me a hug.’ And I said, ‘Yeah.’ And you know something I noticed? Joy Behar’s face was flushed. She enjoyed it. (laughter) She loved it! Yes, I saw that with my own eyes. There could be something developing there; I’m not sure.

PHILBIN: It became the talk of the night.

RUSH: It became the talk of the night. Preemptive strike, Mr. Snerdley. (laughing) You kill them with kindness. I haven’t seen her, gotta be 12 years, or maybe even longer than that. I don’t know. Time flies by so fast, I get lost in tabulating the years.