John McCain to Rush Limbaugh: Calm Down, Reach Across Aisle

RUSH: McCain had a press conference today, standing in front of the Straight Talk Express bus, was heading out there, standing with Joe Lieberman, and who else was there, Lindsey Graham. Here’s the AP version: ‘Boosted by his big night, John McCain asked his loudest conservative critics Wednesday to ‘calm down’ and support his Republican presidential candidacy, as Barack Obama and Hillary Rodham Clinton girded for more rounds of their protracted struggle for the Democratic nomination. … McCain was referring primarily to radio talk show hosts and other pundits of the right when he appealed for unity now that he has a leg up in the nomination race. ‘I think they’ve made their case against me pretty eloquently,’ he said, adding wryly, ‘if that’s the right word.’ He asserted that the pundits of conservative hero Ronald Reagan — and his — reached across the aisle to Democrats just like he wants to do as president.’ 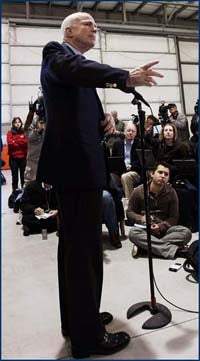 Now, this is what nobody seems to get. When did the measure of conservatism, when did the measure of success, when did the measure of progress, when did it become reaching out to Democrats? Mr. McCain, Ronaldus Magnus did reach out to Democrats — to defeat them! Ronald Reagan created what’s known as the Reagan Democrats, Southern Democrats, who joined the Republican Party as conservative voters. They may have stayed Democrats, but they were voting for conservatism. We are reaching out and asking liberals to come join us as liberals. And somehow this is a great masterstroke? If this were a war, what we’re saying is, ‘Enemy, come on in, and come be who you are when you get here.’ If the Republican Party and the Democrat Party were two nations, Senator McCain is saying, ‘I’m going to have no border on my nation, the Republican Party. And if those people in that enemy party want to come in, infiltrate our party, that’s great. I’m going to show that I’m the guy that can get it done. I’m going to be the guy to not protect the borders.’ Why is it so hard? I’m serious. This one escapes me. Why is it so hard to understand that what we want is to defeat those people?

We view those people as threats to the American way of life, as we’ve always known it. We view liberals as a threat to the founding of this country. We view them as a threat to the future. We view them as a threat to the traditions and institutions that have defined this country’s greatness. We view them as people who need to be defeated, not worked with. Working with them, history has shown, ends up being a one-way street. They get what they want, the neutering of conservatism, the neutering of the Republican Party. They get their judges nominated, and of course when that happens, those people are not ever standing for elections, so they’re immune forever to the will of the people. We see liberals as trying to co-opt culture, education, and government in ways that it can never be gotten rid of because they want people in positions that are appointed, and of course for which there are no elections. Somehow we now define maturity and greatness, electability, success, as, (doing McCain impression) ‘I can reach out to Democrats. I’m the only one who can do it. I can reach out there and I can bring ’em in,’ as they currently exist. So you reach out, you tell the people that want to destroy your party, you tell the people that want to destroy conservatism, ‘Come on in and do it.’ And it’s worse than that. After you invite these liberal Democrats, you cross the aisle and you ask them to come into your party, you help them do what their intention is, all the while getting praised for reaching across the aisle, bipartisanship.

There is no such thing as bipartisanship anymore. Bipartisanship has come to mean one thing: The Democrats get what they want. And we’re fed up, and we’re certainly not happy and thrilled to hear that that is a r&eacute;sum&eacute; enhancement for electability. He said it. ‘I can reach across the aisle, and I can work with the Democrats.’ Yeah, we know that. And what do you ever get for it? What does the Republican Party get for all of your working with the Democrats? Versus what do they get. They’re going to get their global warming deal. They’re going to get massive tax increases and incursions on liberty, dealing with this hoax. What do they get with McCain-Feingold? They get the premise that government can shut people up at a certain time. What do they get with McCain-Kennedy? They get amnesty, a never-ending flood of potential new Democrat voters. What do we get when we reach across the aisle? What do we get when we bring Democrats in? Lest we forget, certain Republicans worked with Democrats to get Bill Clinton off the hook during impeachment. We’ll always remember that, those brilliant House managers were sold down the river, thrown under the bus, and thrown overboard, all because the Republicans in the Senate didn’t want to deal with the problem attached with it.

So once again, we show that we can work with the Democrats, and we can reach across the aisle and we can show a spirit of cooperation, while what really happens is that we lose a little bit of our identity and soul founded within this party each time it happens. Now they’re telling us to get over Reagan. There was only one Reagan. You guys gotta get over Reagan. We got people on our side, that’s true, that’s true, we gotta move on, it’s 2008. Well, let’s get beyond Vietnam, too, can we?

RUSH: I have another question, before I get back to your phone calls, one more point and a question. When is the last time — I know you people pay attention — when is the last time that you heard Hillary Clinton or Barack Obama talk about reaching across the aisle to work with us? No, seriously. I mean, stop laughing. I’m being serious. Do they ever say this? In fact, last night, Hillary, in her speech, went on and on and on about us. She was attacking Bush, she was attacking the Republicans, and Obama hasn’t gotten to that point yet because he’s still out there flying around on Vapid Airlines with all this flowery lingo, but I don’t hear them talking about reaching across the aisle to work with us.

Now, here’s the rub with me about McCain’s popularity. John McCain is always allowed to have it both ways. He is instrumental in obstructing what conservative measures we do want to implement, and as a result of obstructing those measures, he gets lauded for it by the Drive-By Media. Then after that, after McCain stands in the way of conservatism moving forward and being lauded for it, Republicans get blamed for getting nothing done! McCain gets credit for being a maverick, as if that’s evidence of his great character, because he’ll always follow his conscience rather than the party line, blah, blah, blah, blah, blah, but he’s always a maverick in furtherance of principles that we find abhorrent and principles that liberals love. He’s getting credit on both sides, never paying a price, and Republicans get the blame for it, among voters. ‘I’m sick and tired, we’ve had the White House, we’ve had Congress for eight years, six years, what do we have to show for it?’ McCain. Do you follow me here, folks? While he’s out there obstructing conservatism, thumbing his nose at us, he’s being lauded and praised. Big maverick, gets credit for that. Then Republicans get blamed for nothing getting done. By the way, not to mention, it really takes no courage for Senator McCain to stray from the party line because he gets nothing but adulation from it, from the Drive-Bys. They love him. Sabotage his own party; they love him. But now as the primaries are making clear, he’s paying no price for any of these betrayals, and I think that probably spells out and explains the root of the rage that lies beneath these primary votes that the Republican Party has no idea is occurring.

RUSH: Apropos what I was just discussing, this being enamored — Republicans being enamored, defining greatness — by ‘reaching across the aisle’ and ‘working with Democrats.’ (doing McCain impression) ‘That’s what Reagan did. I saw it! I was there!’ That’s not what he did. He reached across the aisle to bring ’em to us, as conservatives! I’m sorry for yelling. David Brooks was on The NewsHour with Jim Lehrer. (interruption) No, no, listen to this. He had this to say. He has a theory. 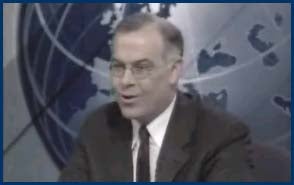 BROOKS: I have a theory about why they don’t like McCain —

LEHRER: What is that?

BROOKS: — and I think it’s your attitude toward the other side.

BROOKS: — and McCain may disagree but he doesn’t necessarily hate them — and I think a similar sort of theory goes on, on the Democratic side.

BROOKS: Some people think you can never deal with Republicans.

RUSH: They don’t have to ‘deal with’ Republicans, David! McCain’s dealing with them and giving away the house. He’s giving away the store. We don’t hate ’em! We want to defeat them. This is politics; it’s not personalities. We don’t like their ideas. For crimanitly’s sake, what is so difficult to understand about this? Maybe to these people there’s not that big a difference in the ideas that we have. ‘We just need to work around the edges. Smooth them out! Come up with brilliant compromises and move the country forward.’ Of course, I think it’s probably true because these people on our side — the conservative punditry — they love Big Government! They apparently believe in a big, active government doing their agenda and so forth. We don’t hate ’em. They are the enemy! They are to be defeated. Politically. He just evolved that theory — and, of course, the theory is only applied to us. We’re the weird ones. They’re giving away the story right underneath their noses. They don’t even see it, probably don’t even care.