McCain Banks on Fear and Loathing

RUSH: This may change the whole equation for Senator McCain’s address before the Conservative Political Action Conference this afternoon, CPAC, where Mitt Romney just spoke, because Romney just suspended his campaign. I think he probably will in some states be able to hold onto the delegates. He didn’t endorse anybody. I think what happened was, he looks forward, it’s just impossible in the delegate count, have to run the table to overcome this. He probably just made a realistic decision on the basis of that and finances and a number of other things, but now, McCain, what does it matter what he says at CPAC? It matters a little bit, but if he wanted to, McCain could walk in there and say, (doing McCain impression) ‘All right, I showed up. Now screw you!’ And leave. ‘Where else you going to go, Huckabee? Ha! Don’t make me laugh.’ Sorry, folks. I just like doing my McCain impersonation.

Allen in suburban Philadelphia. It’s nice to have you on the program, sir. Hello.

CALLER: Right-thinking dittos, Rush. How are you?

CALLER: Or should I say irrelevant right-thinking dittos. Funny how someone who is so irrelevant, the Drive-Bys seem to like to talk about you all the time. But first, let me just say that I think Mitt Romney’s withdrawal proves he is a good businessman if nothing else. He realized he wasn’t going to win so why throw away all that money. I mean, we’ll see him again.

RUSH: Yeah, he could stay active in a number of ways. He could run for the Senate against the haughty John Kerry in Massachusetts, if he chose to, for example.

CALLER: Now, the reason I called, though, I just wanted to say that for a few days I was toying with the idea of either sitting out the presidential election or voting for a third-party candidate if McCain does win the nomination, which now, of course, looks like a lock, but I think I’ve come to my senses. First, I could never vote for a Democrat. I’m sorry to say I have voted for two Democrats in my life, and I regret both votes, one was Patrick Moynihan and the other was Arlen Specter, but seriously, though, if Hillary wins the Democrat nomination, there is no way I can’t do everything in my power to defeat her, even if it is by only one vote. I understand the thinking that in the long run it may work out better to let a Democrat mess up the country as opposed to a Republican, but the idea of Bill and Hillary’s smug satisfaction after moving back into the White House is really just too much for me to take. I hope it doesn’t make me shallow. I just can’t handle the idea of Hillary winning. Now, if Obama wins, I will definitely vote a third-party ticket, though. 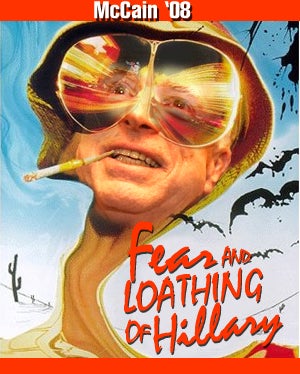 RUSH: (doing McCain impression) ‘You see, Limbaugh, this is why I don’t need you, because they hate Hillary. They’re going to vote for me no matter what even if it means voting against her, so I’m not worried Limbaugh about you or any of your other people, see?’

RUSH: I’m telling you that’s what the Republican Party is relying on. They’re relying on guys like you who are, at all costs, going to go out there and try to defeat Hillary, which I totally understand. I just think there’s such a chance for leadership here. You know, optimism is not being clouded by reality, and optimism is not false reality and so forth. You play the hand you have, you deal the cards and play the hand that you have, and that’s what you’re going to do.

CALLER: Well, absolutely true. What’s our alternative? McCain is obviously McCain, obviously no friend of the Republicans, but —

RUSH: McCain is a big friend of Republicans.

CALLER: Well, maybe the left wing of the party.

CALLER: But I don’t know. Again, I hope it doesn’t make me shallow. I know that we’ve got a long ways to go, but —

RUSH: Don’t worry about what people think of you.

RUSH: Don’t care. Just go do what you’re going to do, do it, follow your gut —

RUSH: — your conviction, and don’t worry about what people think of you.

CALLER: The idea of —

‘This year, for the first time, the Democratic Party will nominate a candidate for president who is not a white male. But the results from Super Tuesday contests coast to coast suggest that white males, like a sovereign who gets to name his successor, may be the decisive swing vote in this historic battle between a black man and a white woman. While the results fluctuated wildly state to state, it appears Illinois Sen. Barack Obama narrowly won the white male vote in battling New York Sen. Hillary Clinton to a Super Tuesday draw. Indeed, white males ‘are holding the balance of power in the Democratic primaries and caucuses,’ said David Redlawsk, a University of Iowa political scientist who was elected a John Edwards delegate in his state’s caucuses and has written about the intersection of gender and politics. ‘White males are playing a fairly important role here.” The dirty little secret is they always have. They always do.

‘Since the New Hampshire primary, white women have been consistently siding with Clinton. They represent a disproportionate share of the Democratic electorate because they are both more likely to be Democrats and more likely to vote. Black voters are backing Obama in numbers trending toward the unanimous.’ Well, for the first time in history there’s no white guy running on the Democrat side. You have the black guy and the white girl. You have the black guy, the ex-wife, and you have white men trying to figure out, ‘What the hell do we do?’ Most of these white guys have been neutered. They’ve been feminized because they’re Democrat liberals. Think Alan Alda and Michael Kinsley. They’re looking here, and they’re conflicted as hell. The temptation here to go with Obama will assuage them of their white guilt, but going with Hillary will show that they are genuine feminists. What are they to do? What will be the determining factor as far as how these guys go? The bottom line is it may not be Hillary, so there may not be fear and loathing that Republicans or McCain can rely on here. It may be just the opposite. We may be dealing with somebody who gets the nomination because a bunch of Democrats think he’s the reincarnation of JFK, but regardless, you’re not going to be able to gin up fear and loathing of this guy. He doesn’t exude a personality that makes you dislike him. He doesn’t exude a personality that makes you fear him. He doesn’t talk enough about his policies to make you fear those. So fear and loathing, if he gets the nomination, any Republican is going to be handcuffed here in terms of how to deal with it.

If Obama gets it, you’re going to have an age contrast. You’re going to have an age contrast, you’re going to have a generational contest, pass the torch, new generation. If these people on our side are going to rely on this anti-Hillary loathing, then you better do what you can to ensure she gets the Democrat nomination. In fact, I have seriously been considering — we’ve done this before, there’s precedent — when the Democrat National Committee threw Carl McCall overboard, when he was running for governor, first black guy to run for governor of New York and they abandoned him, and they didn’t give him any money, we fundraised. I asked you in this audience to send him a buck, and some of you did. He got a considerable amount of money. The New York Daily News had a columnist, E. R. Shipp, and she wrote a piece how embarrassing it was that Rush Limbaugh’s listeners were donating to Carl McCall’s campaign.

Now, it’s obvious that the Republican Party wants Hillary because they want to use the fear and loathing to unite the party rather than leadership from within the party; am I safe in saying this? Think I am. The guy from Philadelphia just illustrated it, ‘Well, we want the fear and loathing of Hillary to unite the party rather than leadership from the party.’ Therefore, might it be required (she’s having to loan herself money), do you think I should conduct a fundraiser for Mrs. Clinton? Mitt did his part today. He got out so as not to fracture the party any further and not to harm the effort to win the war in Iraq. Should I do my part, not by joining my liberal friends in the Republican Party, but actually raising money for Mrs. Clinton, and asking you to join me, so that she would have a chance here to once again have a good shot at getting a Democrat nomination so that we win the White House? (interruption) Well, but I didn’t raise money for Howard Dean. I know I endorsed Howard Dean, but I didn’t raise any money for him. I’m not talking about endorsing Hillary. I’m talking about raising money for her because apparently the Republican strategery is relying on fear and loathing of Hillary to unite everybody. If she’s not the nominee, that’s out the window.