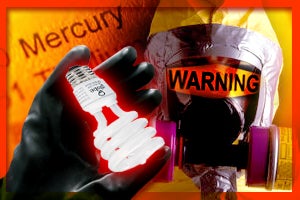 I don’t know how long before the lawsuits. It won’t be long. But these are the things that have been mandated, folks. ‘To reduce our carbon footprint, Mr. Limbaugh! Yes, we must engage in this safety procedure, Mr. Limbaugh, to save the earth.’ I get so sick and tired of the New Castrati being in charge of everybody’s lives like this. The incandescent bulb is destroying the planet! It is so, frankly, ridiculous and absurd that it insults my intelligence, and it worries me when so many people are so mind-numbed that they go along with these charades and make themselves feel like they’re actually doing something to improve their lives. The headline in the Boston Globe story, by the way, is: ‘Mercury Leaks Found as New Bulbs Break — Energy Benefits of Fluorescents May Outweigh Risk.’ Oh, really? So now we’re going to put mercury…?

When is the last time a bunch of liberals downplayed the risk of something? Wait ’til the trial lawyers get hold of this. Downplay the risk? ‘Energy Benefits of Fluorescents May Outweigh Risk’? You asked for it, you got it. You vote liberal Democrat, this is what you get. When you’re going to allow a bunch of bureaucrats to turn over as much of your freedom as you have, this is what you get. When you buy into hoaxes and silly things that a little examination with your own common sense can tell you is not true — such as incandescent lightbulbs are destroying the planet, causing global warming — if you’re going to buy into this tripe, then you deserve what you get. You deserve it. The problem is, we’re all going to get it, too, because of people’s stupidity. We’re not going to have a choice to put compact fluorescents in our houses or not.

You can’t dim these things, can you? I’m not that familiar, but I don’t think you can. I think I’ve heard people say that you can’t dim them; in other words, put ’em on dimmers. If this actually happens… You guys have been to my house. If this actually happens, I’ll have to tear the whole wall out. I’ll have to tear everything apart. There’s no way. I am not going to have a bunch of spaghetti looking lightbulbs on display from the ceiling, accent lighting for various pictures on the wall. They are crazy. I’m not going to take ’em out. I’ll just tell you (sigh), folks, it ain’t going to happen. I wonder, however, if I could put some compact fluorescents outside in my landscape lighting and not have to turn ’em off for the turtle season because they’re safer and they’re more energy efficient and so forth, and maybe the turtles won’t even be able to see them. Fat chance.