RUSH: This is on the Gateway Pundit website, but then there are cites to Little Green Footballs and another blog. Apparently McCain is out of attacking the Swift Boat Veterans for Truth. I have details on that coming up. For those of you who think I have a problem with Senator McCain, wait ’til you hear George Will’s column on Senator McCain today. The Drive-By Media continued to misreport, either by design or by accident, this whole controversy over Obama’s middle name and me. Twice now in Drive-By Media coverage, they misconstrued — it’s either laziness or malice, and perhaps both — the context of what I have said. The first time was when the New York Times smeared McCain on this lobbyist and the sex angle. The Drive-Bys said that conservatives rally to McCain. ‘Even Rush Limbaugh,’ they were all saying. I mean, I don’t care where you go, whatever cable network you went to, whatever newspaper you opened up: ‘Rush Limbaugh, fellow conservatives rally to McCain.’ I never addressed support or nonsupport for McCain. 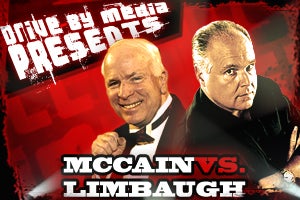 I was talking about the issue on the table, which is: This is what happens when conservatives seek acceptance from liberals, be they in the Democrat Party or be they in the Drive-By Media. They are out to savage us, they are out to destroy us. They are not out to get along with us, as we seem to be trying to do with them, and it was just evidence. So, I suggested to Senator McCain, ‘Maybe the lesson to learn here is who your real friends are.’ Likewise with this Hussein name business. If I’ve read it once today, I’ve read it twice that I constantly refer to Obama using his middle name, which I don’t! And, in fact, for the last two days I’ve made a point of saying we don’t make a big deal out of it here because, frankly, there are other ways of going about dealing with Obama that are going to require far more finesse than just throwing out his middle name or whatever you want to try to imply by using his middle name. And one of the things I addressed in great detail yesterday was: We’re dealing here with people who are attached to a candidate — in this case, Obama — on the basis of faith; not knowledge, not policy, not ideas. Faith.

You know how tough it is to get people to give up their faith. He’s leading a movement here. He’s not running a political campaign. So attacking his candidacy in the traditional ways of going about it in opposing campaign, at some point you’ll have to do that, but in addition to that you’re going to have to find a way to separate some of these faithful followers from him and the more you criticize Obama the more the attachment the faithful are going to have to him. It’s human nature. I made it plain. Now the Drive-Bys are insinuating that I think calling Obama by his middle name to highlight something Muslim is legitimate. Wrong again! I have never said that. All I said was are we going to let these guys tell us what we can’t say? Obama doesn’t like his middle name being used, so we can’t use it? What are we going to call him? Barack Fitzgerald Obama? Barack Earl Obama? Should we give him some other middle name? I can call the Drive-Bys every day and say, ‘You know, I really wish you wouldn’t say this about me the next time you mention me,’ and it isn’t going to matter.

But somehow when Obama doesn’t want his middle name used or if he doesn’t want to be called a liberal, then our guys say, ‘Okay! Okay! Oh, oh! Fine, fine, whatever you want.’ They’re so defensive and so afraid. That’s what I pointed out. I’ve never said he’s a Muslim. Other kooks out there are doing that. I’m not wasting my time with that. Only an idiot would insinuate I’m out there trying to make a connection between Obama and some radical Islamic faction. As I say, this is either laziness or malice when these people include me in all of these rantings of some people out there who are attempting to make that connection. We don’t do it here. I hardly ever use his middle name — and I’m not the one, by the way, that came up with this Obama Barack, that was Ted Kennedy at the National Press Club, and yet I still get credit for that. I spoke about it as a free speech issue… how we’re allowed to address him. No, liberal. We can’t use his middle name. So what’s next?

I’ve been very clear in all of this — five to seven minutes running of commentary clear — and yet the Drive-Bys mischaracterize it nonetheless, and I have to think on purpose. So I want to set the record straight on that because it’s: Here we go again. We’re supposedly the ones that have brought incivility to American politics, people like me, hatemongers and so forth; sit here and routinely are lied about and mischaracterized. And, normally, as you know, I don’t even talk about all this because it happens so much each and every day. But now with the death of Mr. Buckley, the left is getting an opportunity here to revive the thing that first hit me 20 years ago: ‘Hatemonger, racist, sexist, bigot, homophobe, oh, too bad Mr. Buckley’s gone. Civility and erudition have gone out the window,’ and it burns me because the sanctimony, the arrogant condescension from a bunch of small-minded genuine hatemongers. I don’t know. There are certain human characteristics rub me wrong. Arrogance is one.

I hate arrogant people, whether they have so-called qualifications to be — and I hate sanctimony, and I hate superiority. I hate these people that run around, think they’re better than everybody else when they don’t know that 2 + 2 is 4, and that’s many in the Drive-Bys. It’s many in modern-day liberalism. There’s a sanctimony and an arrogance that attaches to them, to the point they don’t have to explain what they believe. They don’t have to define it. They just are, and what they are, is — and anybody who’s not what they are is a racist, a sexist, a bigot, a homophobe, or kook. You know, one thing I admire about Buckley is he did something I don’t want to do. He walked into the den. He talked to these people all the time. He debated them on his TV show, Firing Line. He had fun doing it. After awhile, folks, I’ve had my fill. I’ve had my share of talking to liberals, socially. It ceases to be fun.

It just becomes frustrating, because of the sanctimony and the arrogance, and the idea that constantly conservatives have to defend themselves and what they think and what they do and so forth. So my desire is not to subject myself to that kind of thing. It just rubs me wrong. Other people look at it a different way, and I certainly don’t want to go out of my way to make these people like me by becoming like them. I’m not seeking their approval, and it burns me — it just burns me — when I see so many smart people on our side seeking their approval and acceptance. It’s like they are the parents and we are the wayward children and we’ve rebelled, but now we want the parents to let us back in the house, so we can live at home. Sorry, that’s not me.