INGRAHAM: In the Back of the Book segment tonight, radio talk show giant Rush Limbaugh [is] making waves over Tuesday’s vote. He’s been urging his Republican listeners in Texas and Ohio to vote for Hillary Clinton next week to keep the battle going within the Democratic Party. So could Rush Limbaugh really turn out to be Hillary’s white knight? I spoke with him just a few hours ago. 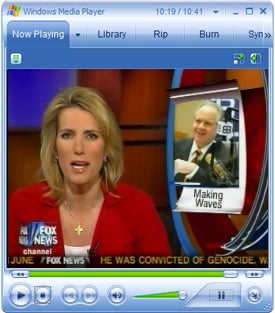 INGRAHAM: Rush, I understand that the Rush Limbaugh audience is mobilizing in Texas for Hillary. Am I hearing that right?

RUSH: I don’t know if the audience is mobilizing or not. I am urging people — I am using a phrase, to Republicans. Our nominee is chosen. It’s John McCain. Texas is open. And I want Hillary to stay in this, Laura. This is too good a soap opera. We need Barack Obama bloodied up politically, and it’s obvious that the Republicans are not going to do it and don’t have the stomach for it, as you probably know. We’re getting all kinds of memos from the RNC, saying we’re not going to be critical there. Mark McKinnon of McCain’s campaign says he’ll quit if they get critical over Obama. This is the presidency of the United States we’re talking about. I want our party to win. I want the Democrats to lose. They’re in the midst of tearing themselves apart right now. It is fascinating to watch, and it’s all going to stop if Hillary loses. So, yeah, I’m asking people to cross over and, if they can stomach it — I know it’s a difficult thing to do, to vote for a Clinton, but it will sustain this soap opera, and it’s something I think we need. It would be fun, too.

INGRAHAM: I mean, Rush, Bill, and Hillary. Very strange bedfellows. I mean, I’ve never heard of anything like that, but anything to keep the chaos going.

RUSH: Well, let me tell you what the chaos is. Let me give you a great example. We had Michelle Obama, who was in Zanesville, Ohio talking to a bunch of people that live there. The income, average income is below the national average. So is the education level. And Michelle Obama is telling them, ‘Don’t go into corporate America,’ and she specified two things. Don’t become a corporate lawyer, and don’t become a hedge-fund operator. Now, Hillary was a corporate lawyer, and Chelsea is in the hedge-fund business. I think that Michelle Obama is seething over the attacks that the Clintons have made against her husband with that photo with, you know, Obama looking like Ayman al-Zawahiri; all of this talk about his middle name and so forth. I think this was Michelle Obama with a womb-to-womb, frontal attack on Hillary Clinton, and I think Hillary is seething. I think she knows this. I know most men probably would not pick this up, but this is juicy. It is just too good. The whole point of Michelle Obama’s riff was not to talk to that audience in Zanesville. It is to appeal to Hillary Clinton. You’ve got the Democrats wringing their hands over whether or not it was appropriate to have a non-black guy play Barack Obama on Saturday Night Live. This kind of stuff is stuff the Republicans can’t do. The Republicans won’t do it. But Hillary Clinton, this is what she’s lived for, Laura. You know this. For 35 years, everything she has put up with since she left Yale and went to Arkansas with Bill, has been aimed at this moment. She just can’t quit now. I see that they’re threatening to sue in Texas over the selection process down there, delegate-wise, because you can vote twice with the caucuses and with the primaries. And if she loses next week, it’s going to be a shame to have to play funeral music. I want the funeral music to play at some point to the Clintons, but not this early.

INGRAHAM: Now, Rush, don’t you think it’s interesting that there are all these attempts to intimidate critics of Obama; intimidate them from speaking out, from making comments about his substance or lack thereof or his empty rhetoric or any of that; and, yet, John McCain kind of needs talk radio to do that. Yet, of course, John McCain has kept an arm’s-length distance, to put it kindly, with talk radio.

RUSH: See, this is another reason why we need Hillary to stay in. Who started all this stuff? Who was the first person that leveled the charge that Obama may not be ‘black enough’? This is stuff we can’t say, Laura. This was started by an LA Times columnist who is black. Who was it that first used Obama’s middle name of Hussein? It was not us. It was Bob Kerrey, over and over again, former Democrat senator of Nebraska. Who was it that talked about Obama not just using drugs, as he admitted in his book, but maybe even selling them and dealing them? It was Shaheen, Clinton’s co-chair in New Hampshire. All of this stuff — the middle name, the drug dealing, the drug selling, the picture of Obama in the turban, all of this — has come from the Democrats, not us. The MO is, if somebody on the Republican side starts using his middle name, ‘Why, there’s a foul. There’s a violation.’ But Obama can’t get away with this. He doesn’t want to be called a liberal. He didn’t want his middle name to be used, and pretty soon, what’s going to happen is — if we don’t shut up or speak up about this — the Democrats are going to get away with telling Republicans what they can and can’t say to the point that we’re not going to be able to say anything. And this is my great fear: that people aren’t going to have the guts to be critical of Obama on the serious things he deserves to be criticized for, such as his absolute ineptitude and danger on foreign policy, just for one example.

INGRAHAM: And directly ahead, we’ll have more of my interview with Rush Limbaugh. He’ll take on the challenges of John McCain, coming right up. 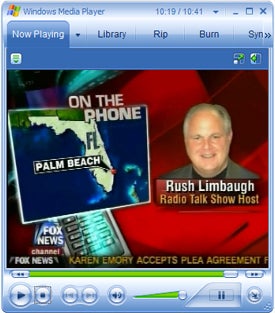 INGRAHAM: Continuing now with my interview with Rush Limbaugh.

INGRAHAM: I want to switch gears now and really focus on McCain, Rush. Because earlier in the week, of course, the radio show host Cunningham went up at this forum and used Barack Obama’s middle name — and, as you pointed out, Democrats had already used the name ‘Hussein’ many times in referring to Barack Obama. And, yet, John McCain feels this absolute need to rush to the microphones and denounce this radio host, as if it’s such a big deal. What did you make of that?

RUSH: Well, I think this is some… I understand what Senator McCain is trying to do. He’s trying to portray himself as above all of this guttural stuff, what he sees as guttural, and run a campaign of honor — and I don’t have any problem with that. But the problem I do have with it is that it appears that it’s an appeal to the media and it’s an appeal to the Democrats. It’s a desire to please them. I would love for Senator McCain to start treating liberal Democrats the way he is treating conservative Republicans. I’d like to see him throw some of them under his bus. This crossing the aisle, reaching across the aisle, is fine and dandy — except it doesn’t work. We always end up compromising our core principles to get anything done this way. We don’t see mavericks in the Democrat Party. When we do, what do they do? They run them out of there. Joe Lieberman, Zell Miller. So I know what McCain’s trying to do. He’s trying to stay above the fray here.

INGRAHAM: Rush, I was listening to the EIB Network, I think it was earlier this week, and you were talking about how the country is going to need a new tutorial about the dangers of liberalism. And yet, it’s going to be very difficult, maybe, for John McCain to deliver that tutorial, given the fact that he has worked with so many liberals on so many fairly liberal ideas. So, how do you do that? How do you expose Barack Obama for who he is, given the fact that the standard-bearer of the party is kind of a moderate?

RUSH: Well, there is a danger in that. You’re right. That’s quite shrewd of you. If Senator McCain attempts to identify Obama as a liberal on a few things — we don’t have time to list them here — Obama could retort, ‘Well, Senator, you supported our party. You supported us on that issue,’ whatever it might be. I see Senator McCain right now attempting to shore up the conservative base and sort of trumpet his conservative credentials. But, Laura, I don’t think he’s a conservative ideologue. I don’t think there are too many Republicans elected today — there are some, the back benchers — that are really ideologues who are oriented toward leading a movement. That’s what we really want. Reagan was leading a movement. He was teaching, as well as being president and campaigning. I think that the Republican Party has got its own battle going on. There’s a battle for supremacy between the moderates, the country-club blue bloods, and the conservatives. And there are a lot of country-club blue bloods who think that the secret to the party’s success is reaching across the aisle and bipartisanship and so forth. Whereas people like me and — I’m sure — you look at liberalism as a threat to the institutions and traditions that have defined and kept this country great, and they need to be defeated. They are clearly trying to defeat us.

INGRAHAM: You know, Rush, you should really think of getting into radio. You really… You do that monologue thing really well.

RUSH: Well, I’m sorry. I do. I’ve got diarrhea of the mouth, Laura.