Why We Want to Keep Hillary Alive

CALLER: Hi, Rush. I total disagree with this strategy. You setting up a Clinton-Obama reconciliation ticket. You’re going to get two of the most immoral, unscrupulous Clintons back in unchecked power and we are going to be screwed. 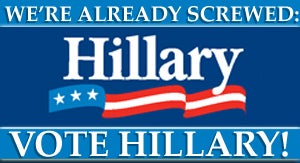 RUSH: We’re already screwed. What we have to do is limit the being screwed to as small a screwdriver as it can be. And here. Here’s the thing. The strategy is not to have these guys win. They may form a fusion ticket at some point down the road. Do you understand what the purpose of the strategery is?

RUSH: No, the strategy is… Yes. The strategy is to continue the chaos in this party. Look, there’s a reason for this. Our side isn’t going to do this. Obama needs to be bloodied up. Look, half the country already hates Hillary. That’s good. But nobody hates Obama yet. Hillary is going to be the one to have to bloody him up politically because our side isn’t going to do it. Mark my words. It’s about winning, folks!

RUSH: Look, folks, I understand out there, many of you are worried here about my strategy. I don’t even know if it’s going to work. I don’t know how many Republicans tomorrow in Texas, are going to cross over vote for Hillary. I don’t know if it’s happening in Ohio, either. I’m not urging action. It sounds like I’m urging action, but you know I don’t give marching orders here. I’m just thinking aloud and telling you what I think is important to happen here. If either one of these two get the nomination — and one of these is going to get it; it’s either going to be Barack Obama or Hillary — they’re both ripe targets if we just don’t run around and act afraid of them, and if we don’t try to steal their voters at the expense of our own. Anyway, that’s for later on down the line. There’s a great piece today in the American Spectator Online, and it’s by Mark Hyman, and it’s entitled, ”The Coming Brokered Democratic Convention’ — There is only one thing the public can be certain of regarding the Democratic presidential nomination: without a miracle, there will be a brokered convention. Senator Barack Obama was leading Senator Hillary Rodham Clinton in the delegate count going into the Super Tuesday II primary elections on March 4. Obama held 1,193 primary delegates to Clinton’s 1,038.

‘The status of the superdelegates is meaningless because their pledges today may not carry any meaning come the Democratic nominating convention in Denver during the last week of August. A Democratic candidate needs to reach a minimum of 2,025 delegates to clinch the nomination outright. Clinton will not reach that figure before the last primary election is held in Puerto Rico on June 7. Neither will Obama,’ says Mr. Hyman. He ‘needs 832 more delegates to reach the magic number of 2,025. There are only 981 remaining primary delegates that are up for grabs. Three hundred seventy delegates will be decided on March 4 and 611 will be divvied up across 12 primaries between March 8 and June 7. Obama would have to win an astonishing 85% of the remaining 981 delegates in order to claim the Democratic nomination outright. There are no winner-take-all primaries for the Democrats. Obama will never get the needed 832 delegates. He may fall short of reaching 2,025 delegates by as many as 250’ delegates, and we’re not factoring, again, the Democrat superdelegates, here.

As Mr. Hyman says, ‘[N]either Obama nor Clinton will tally the needed 2,025 delegates when the primary election season is completed. The pair will have eleven weeks between Puerto Rico’s primary election on June 7 and the convening of the Democratic convention on August 25 to persuade superdelegates to support their candidacy. A lot can happen in 11 weeks. There will be horse trading, influence peddling and cajoling. It will be a real knife fight to the end. Layer on top of this real-world events. Everything from the economy, Iraq, terrorism and damaging revelations of the ties between Obama and Antoin ‘Tony’ Rezko, the land developer currently under federal indictment, could greatly influence the superdelegates’ commitments. Still, the only date that really matters for the superdelegates is the day they cast their ballots in late August.’ Now, let’s go to the audio sound bites on this, because now there’s talk of redoing the Florida Democrat primary. And getting some of that talk started is none other than Florida’s governor, Charlie Crist. He was on Late Edition yesterday with Wolf Blitzer. Blitzer said, ‘Let’s talk about the Democrats first. One-point-seven million Democrats or so voted in the Democrat primary, but that vote’s not going to be counted in your state. Are you, as the governor, ready to let the Democrats have another primary if necessary to seat those Democrats, those Democrat delegates at the convention in Denver?’

CRIST: That would be fine with me. I — I think it’s very important, though, that those delegates are seated. I’m hopeful that the national Democratic Party, the Democrat National Committee comes to the conclusion it’s the right thing to do. Every vote must count, every vote should count — and for the Republicans as well. They’re not counting half of ours.

RUSH: Whoa! So here’s Charlie Crist. I think Governor Crist perhaps may be a stealth practitioner of the Limbaugh strategy here. Do you not think so, Mr. Snerdley? There is no question Charlie Crist doesn’t want this Democrat contest to end. There’s no question that Charlie Crist wants — and now Howard Dean weighs in. He was on the same show, and here’s Wolf Blitzer. ‘You heard Governor Crist just tell me moments ago that he’s ready to go ahead, support a redo here in Florida. Are you ready to accept his offer right now?’

DEAN: That’s a very helpful thing for him to say because money is an issue here. Look, there’s two possibilities. One is that there would be such a redo as Governor Crist might suggest, and two is that the party would come and have some other alternative that they would try to push with the credentials committee but we’re very willing to listen to the people of Florida.

RUSH: Whoa! Howard Dean here, throwing gasoline on the fire; opening up the possibility that if Florida pays for it, that they’ll have another Democrat primary here! Now, you might be, ‘But, Rush, the rules, the rules!’ Folks, let me tell you something I learned over the weekend. This is an important distinction. In the Democrat Party, there are no rules. There are just traditions and customs. There are no rules in a knife fight. Let’s not play Civics 101. Let’s not play junior high school, senior class president election. There are no rules. There are traditions. There are customs in the Democrat Party. What are you talking about, Rush? Stop and think about it. If you want to break the rules, talking about, ‘Hey, you people in Florida, you blew it. You people in Michigan, you blew it. You violated Democrat Party rules.’ The party really didn’t have any rules. There was a tradition that they bucked. This is a tradition. They went against the party’s request, but now we see that we can’t disenfranchise Democrats from two major states in the country. So the tradition that every vote must count — the custom that delegates from every state will be seated, will now be employed — with no rules being broken. You see how easy this is? I mean, we’re talking J. R. Ewing and Sue Ellen here on one side (Hillary is J.R.) and we got Cliff Barnes and his family on the other side. That’s Obama. ‘Once you take the ethics out of this,’ as J.R. said once, ‘the rest is easy. ‘

RUSH: So, anyway, folks, the bottom line here, according to Mark Hyman, American Spectator Online, all these primaries are just beauty contests, neither one of these two can win the delegates necessary by the end of the campaign season, which is June 7th in Puerto Rico, and then the real fun is going to begin after that. He says there’s no question the Democrats are going to find a way to seat these delegates from Florida and Michigan. If Hillary has to go to court, she’s going to do it. That’s absolutely right. This is all she’s lived for. All these news stories, who’s going to tell Hillary to get out, there’s a news story today, who’s going to tell Bill to tell Hillary to get out. They’re not going to get out and if she wins one of these two states tomorrow, look out, folks. The media is starting to get a little tougher on Obama now. This is going to be fascinating to watch. I’m telling you, I think this is an excellent point. And of course all this is good, if you ask me, because it keeps the party full of chaos and tumult.