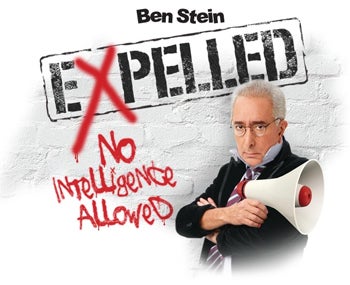 RUSH: Ben Stein has a new movie out. He brought it by my house Friday afternoon to screen it for me. It’s called Expelled. It is powerful. It is fabulous. And here’s the premise of his movie. The premise is that Darwinism has taken root, taken hold at every major intellectual institution around the world in Western Society, from Great Britain to the United States, you name it. Darwinism, of course, does not permit for the existence of a supreme being, a higher power, or a God. His interviews with some of the professors who espouse Darwinism are literally shocking. The condescension and the arrogance these people have, they will readily admit that Darwinism and evolution do not explain how life began. One of these professors said it might have been that a hyper-intelligence from another planet came here and started our race. This from some professor either in the UK, I forget where it was, but can’t be God. These people are so threatened by the existence of God, they will not permit intelligent design to be discussed. Professors have been fired, blackballed, and prevented from working who have deigned to try to combine the whole concept of evolution with intelligent design.

Ben Stein’s new movie is going to open to a thousand screens pretty soon, it’s not out there yet. It’s called Expelled. But the point of it is that these people on the left are just scared to death of God. It threatens everything. We, on the other hand, recognize that our greatness, who we are, our potential, our ambition, our desire, comes from God, and as part of our Creation, this natural yearning to be free and to practice liberty. That is how we think this country came to be great. It is how we think this country will continue to be great and to grow.