RUSH: Now, folks, I want to deviate here for just a minute. There’s a fascinating story I found at Associated Press, and the headline here, ‘Not Just Sex; Why Men See Prostitutes.’ Now, why do you think this story has hit now? Well, obviously, Eliot Spitzer. Just like when Clinton was lying through his teeth, we got stories in the nineties about how lying is good for us and how it spares people’s feelings. It’s not just Spitzer now, it’s Paterson, you know, the new governor of New York who came out and admitted an affair, and they found the husband of the woman he was having an affair with, and this guy didn’t know about it, and he was throwing recycle bins at the Drive-By photographers. He was livid, ‘Get off my property!’ He didn’t want to deal with it. I’ll tell you what, Paterson would be wise never to run into this guy because I think he just learned about this.

Anyway, the story here: ‘High-definition pornography is a mouse click away. Assignations with multiple partners are advertised on Craig’s List. And if celebrities are any indication, underwear is strictly optional. Sex, it seems, is everywhere. It’s on the Internet, in chat rooms, in ‘Girls Gone Wild’ buses and hotel rooms and governors’ mansions. It’s come a long way from darkened peep shows and plain brown wrappers. So in this hyper-sexualized time, one might wonder: What’s the point of going through the elaborate, illegal and stigmatized motions of hiring a prostitute? 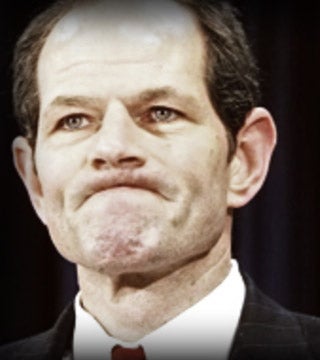 ‘Eliot Spitzer’s alleged choice to partake in ‘the hobby,’ as men who solicit prostitutes call it, cost him his governor’s seat. Why will some men risk everything for secret trysts with sex workers? The answer may seem obvious, but experts say it’s not just about easy sex. Some might be drawn to adventure. Some are attracted to the level of secrecy they think will come with a paid prostitute. Others are looking for a sense of control.’ You see where this is going? AP is practically trying to explain it in a justifiable way. ‘It could say that they don’t know how to be intimate.’ Oh, of course. The Johns have a reason. They don’t know how to be intimate, and they don’t have to be intimate with a prostitute. Bev Smallwood quoted here, a psychologist in Hattiesburg, Mississippi, ‘It could say that they have a sexual addiction, that they have become desensitized to sex within a more appropriate context and they’re seeking one more thrill of the chase.

‘Now, let me get deeper here into the story because this, ladies and gentlemen, the piece de resistance. For those of you in Rio Linda, that means this is the nut graph. They probably don’t know what that is, either. This is the big point, for those of you in Rio Linda. This is the point of the story. ‘There’s little threat of rejection with paid sex. If you want your wife to behave in ways that push certain boundaries, you might get turned down. If you pick somebody up at a bar and try to ease her out of her comfort zone, you might get ‘partial results.’ But with a prostitute, you get what you pay for.’ So the wife is to blame. She just won’t go all out. She just won’t put out, won’t entertain the fantasy, so the guy has got to go out, buy the prostitute, get what he pays for, and then she leaves.

It’s the Rush Limbaugh program, Operation Chaos, meeting and surpassing all objectives. This is white comedian Paul Shanklin in a vocal portrayal of Bill Clinton parroting the Spitzer mess. 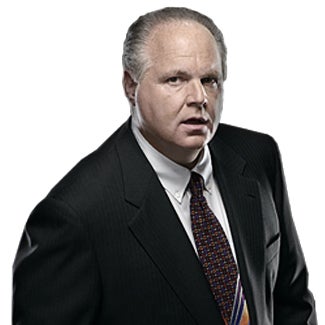 RUSH: By the way, why did I do that prostitution story? I just wanted to hear the Spitzer song, and there was really no way to work it in there, but now, during the break, I found something. Show prep never stops on this program. ‘Are Humans Meant to be Monogamous?’ This is from LiveScience.com. ‘News of politicians’ extramarital affairs…’ News of DEMOCRAT ‘politicians’ extramarital affairs seems to be in no short supply lately, but if humans were cut from exactly the same cloth as other mammals, a faithful spouse would be an unusual phenomenon. Only 3 percent to 5 percent of the roughly 5,000 species of mammals (including humans) are known to form lifelong, monogamous bonds, with the loyal superstars including beavers, wolves and some bats.’ By the way, I did not comment on this, but the Daily Mail in the UK ran a story on Botox and how it’s destroying Hollywood actresses’ ability to be subtle with facial expressions, and they had a picture of Nicole Kidman and it said, ‘Look at what Botox has done to her! She’s got a bat face,’ and they had a picture of a bat right next to her to illustrate how she looked like a bat!

I just was reminded of that. At any rate, yeah, beavers are monogamous, wolves are monogamous, and some bats. ‘Social monogamy is a term referring to creatures that pair up to mate and raise offspring but still have flings. Sexually monogamous pairs mate with only with one partner. So a cheating husband who detours for a romantic romp yet returns home in time to tuck in the kids at night would be considered socially monogamous.’ Well-l-l! Fabulous! We’re redefining the terms here. Does this kind of story ever happen when some Republican minister is discovered to be flitting around with a man or woman? Does this kind of story ever happen? Do we ever get one of these, say, after Bob Livingston says that he’s not going to accept a speakership because he had an affair? Do we ever get stories like this saying, ‘Fine! As long as he got home to tuck in the kids, there’s no problem. He’s still monogamous.’ No, my friends, we don’t get those kinds of stories. It’s only after these Democrats get involved. Snerdley, do you realize the great thing this thing has been for manhood, this story? I can print it out again. This story has lifelong application for all of us guys, thanks to Eliot Spitzer and David Paterson. Just keep a copy of this story in your pocket, go out there to a prostitute or whatever. Go out there and do whatever, and then when you’re called on it, say, ‘No, no, no! Look, science says I’m still monogamous, and science says that global warming is happening, and you believe that, Honey.’ (laughter) This is more fun than a human being should be allowed to have. Operation Chaos continues.

RUSH: Raleigh, North Carolina. Angela, thank you for waiting, you’re next on the EIB Network. Hello.

RUSH: Well, that’s what the story was. If I go out and cat around and get home in time to put the kids in bed, it’s social monogamy.

CALLER: Arrgggg. This has bothered me so much, Rush.

RUSH: You thought I was being a bit flippant?

CALLER: Usually when I get upset like this, I listen to your show and it makes me feel better.

CALLER: So I hope you can make me feel better because that’s just, oh, my God.

RUSH: Now, wait, you don’t think that I was advocating those definitions?

CALLER: No, of course not.

CALLER: Of course not. I’ve listened to you long enough to know better than that.

RUSH: Right. I’m just telling you what’s out there as a result of a bunch of Democrats getting nabbed in this. You never get stories like that after Republicans get caught in affairs using prostitutes or what have you.

CALLER: No. The finger is always pointed very strongly in their direction.

RUSH: That’s why I’m saying if you Republicans are going to mess around, keep a copy of the story in the back pocket because the new definition of social monogamy involves getting home in time to put the kids in bed.

CALLER: Well, the reason I called, and I talked to your screener and I told him that my belief is that the family is the fabric of this nation, it’s what’s makes us great, and because it’s what fuels everything that we do. It’s what we work for; it’s what we die for when we fight for this country. I’ve heard soldiers say that they are in Iraq so their kids won’t have to be.

CALLER: And I just feel like these attacks on the family, I wonder if these people know what they’re doing.

RUSH: Hell, yes, they know what they’re doing. Look, Angela, this is serious stuff. There are a lot of people in this country who want to do away with traditions and standards like you have discussed here.

RUSH: Standards and traditions that have made the country great because they themselves don’t want to face judgment from anyone.

RUSH: They want no standards, and in order to have no standards where they can live guilt-free by doing what they want, they have to wipe them out for everybody, and they have to attack them. We’re under this assault constantly. It’s been called a culture war, any number of things, and great writers have written about it. Now, I’m sorry if you thought I was being flippant, but I think this stuff has to be laughed at. To illustrate the folly of it, to make fun of it, is the best way to do it rather than to get all righteous, start pounding the desk and everything. It’s just my way of choosing to deal with it. I did not mean to have my flippant attitude indicate to you that my devotion to such traditions and standards has wavered in any way, shape, manner, or form. You can trust that this program will stand. I am Rush. I am protector of motherhood, supporter of fatherhood, defender of children, other peoples. I will constantly stand for these values. So don’t worry about this program. I understand the flippancy might have made you think I was laughing at something very serious. Thanks for the call. Appreciate it.