RUSH: Senator McCain has not wrapped up the Chuck Hagel endorsement yet, and I wanted to mention this to you. Hagel was on This Week with Stephanopoulos on Sunday, and Stephanopoulos said to him, ‘Senator McCain is a good friend of yours. Why haven’t you endorsed him?’

HAGEL: When I work for someone or commit to someone, I want to be behind that person in every way I can. I’ve obviously got some differences with John on the Iraq war. That’s no secret. I want to understand a little more about foreign policy, where he would want to go. It certainly doesn’t put me in Obama or Clinton’s camp, but John and I have some pretty fundamental, uh, disagreements.

RUSH: Well, I’m telling you what, if a moderate independent candidate like McCain cannot get the Hagel endorsement, where are we? (sigh) This is troubling, ladies and gentlemen. This is puzzling to me as well. Unless, of course, Senator Hagel is holding out for a pipe dream for his own third party candidacy or independent candidacy somewhere down the line. Speaking of Senator McCain, I’m sure you people have seen this by now in the New York Times a story by Elisabeth Bumiller: There’s a photo of the haughty John Kerry and Senator McCain sitting somewhere in deep leather chairs. McCain is slouching like he’s fatigued and tired. The caption of the picture is ‘Senators John Kerry (L), John McCain meeting with reporters in 2002 as they discussed automobile mileage standards.’ The headline of the story: ‘McCain Twice Flirted with the Democrat Party; Candidate Considered Leaving the Republican Party.’ This is McCain, in 2001 and running with Kerry in 2004. Now, as I say, I’m sure you guys have all seen this, but it still stuns me. (interruption) Assume what? (interruption) Well, because… (interruption) 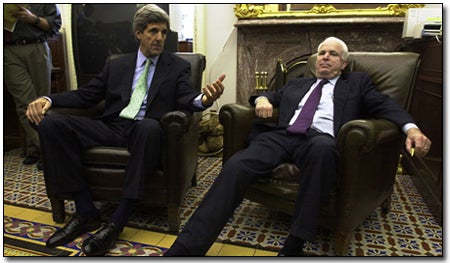 Well, that’s right. It’s the New York Times. Maybe I shouldn’t assume people have seen it. But it’s been out there since last night. It’s in the newspaper today… (interruption) The Drive-Bys have not made it news yet, because the Drive-Bys are occupied trying to hold their own party together. The Drive-Bys are trying to get the Clinton sitcom canceled. So Snerdley may have a point. Maybe you haven’t seen this. Here’s the story. It’s by Elisabeth Bumiller, and here’s how it opens. ‘Senator John McCain never fails to call himself a conservative Republican as he campaigns as his party’s presumptive presidential nominee. He often adds that he was a ‘foot soldier’ in the Reagan revolution and that he believes in the bedrock conservative principles of small government, low taxes and the rights of the unborn. What Mr. McCain almost never mentions are two extraordinary moments in his political past that are at odds with the candidate of the present: His discussions in 2001 with Democrats about leaving the Republican Party, and his conversations in 2004 with Senator John Kerry,’ the haughty Senator Kerry, who served in Vietnam, ‘about becoming Mr. Kerry’s running mate on the Democratic presidential ticket. There are wildly divergent versions of both episodes, depending on whether Democrats or Mr. McCain and his advisers are telling the story. The Democrats, including Mr. Kerry, say that not only did Mr. McCain express interest but that it was his camp that initially reached out to them’ about being Kerry’s vice president, and McCain’s denying that.

But the Kerry camp says, ‘No, we got a call from McCain,’ and you know that Kerry very publicly, proudly said that he was considering McCain. This 2001 business, I had forgotten that, but this is a result of how steamed he was over the South Carolina primary and losing the nomination to Bush in 2000. Remember, he had the Straight Talk Express? It was heading on down the highway? The reporters on it were having the best time, and so was McCain. Then the New Hampshire primary came along, and McCain aced it, but the whole thing got derailed in South Carolina over Bob Jones University and a couple of rumors some people put out about McCain. The point is, he was livid. He was fit to be tied. This is why some people still to this day think he’s got it in for the Republican Party. That’s why he crosses the aisle and makes deals with Democrats. So these two occasions, the New York Times is writing about today. I guess McCain camp is aware. I would hope so. They better be aware what’s in store for them. Once the Democrats have their nominee and so forth, this is just a little, little bitty tidbit of… (interruption) Yeah, I know. There are stories about the Keating Five out there today, too. This is just a little heads-up about what’s coming Senator McCain’s way once the Democrats iron out their stuff and Operation Chaos has come to a conclusion. But it’s still, all of this stuns me. It literally stuns me that a guy, Senator McCain, who spent years criticizing his own party and thought seriously about leaving his own party, is now the leader of it.