RUSH: Yesterday on CNBC, Maria Bartiromo interviewed Barack Obama. It was scary, economically. Bartiromo says, ‘How do you plan to change the tax code when it comes to capital gains? How high will that 15% cap gains rate go?’

OBAMA: I think that we can have a capital gains rate that is higher than 15%. Uh, and if it — if it — you know, when I talk to people like Warren Buffett or others and I ask them, ‘You know, how much of a difference is it going to be if it’s 20 or 25%?’ they say, ‘Look, if it’s within that range, then it’s not going to distort, uh, I think economic decision making.’

RUSH: Oh, my God. I’m sorry. Good God Almighty, is right. We are going to get hosed. The markets are going to get hosed. The economy is going to get hosed! Capital gains is not income! It’s simply what people invest in, and if there is a return on it, the 15% cap gains rate is the equivalent of not punishing achievement from people who took a risk. He’s gotta ask Warren Buffett. No, he doesn’t know. He’s a liberal Democrat. He doesn’t care here what the effect is going to be. Raising the rate to be ‘fair’ and pander to the vast majority of people… Bartiromo is shocked as we are by this, but of course, she’s a journalist. She can’t really exhibit it. But she can’t believe her ears here. Listen to this exchange.

BARTIROMO: Let’s hypothetically say that the cap gains tax goes from 15% to 25%. You’re impacting a lot of people. A hundred million Americans own stocks today so it’s not just the rich.

OBAMA: No, no, no, absolutely, and — and — and that’s why I think that it may be, for example, that you could structure something in which, uh, people of certain incomes were exempted from, uh, this increase and it would stay at 15. The broader principle that I’m interested in is just making sure that we’ve got a tax code that is fair for all Americans.

OBAMA: Well, look, the — there’s no doubt that anything I do that is going to be premised on what the economic situation is when I take office. The thing you can be assured of is that I’m not going to be making these decisions based on ideology.

OBAMA: I’m not a dogmatist.

OBAMA: I know that some — yuh, uh, my opponents to the right would like to paint me as this woolly-eyed, you know, uhhh, liberal or —

BARTIROMO: You’re not a liberal?

OBAMA: I believe in entrepreneurship.

OBAMA: I believe in opportunity.

OBAMA: I believe in capitalism.

OBAMA: And I want to do what works, but what I want to make sure of is it works for all America, and not just a small sliver of America.

RUSH: That last comment just cancels out everything he said before it! That’s socialism! ‘Make sure it works for all,’ and who of course going to do that? Why, our benevolent government and president, Barack Obama! Because we hate all the other instruments and elements and businesses in the free market. We’ve been conditioned to that. This is scary.

RUSH: Ladies and gentlemen, it is apparent to me, and probably to many of you, that Barack Obama is clueless. I think he’s vamping in his answers. I don’t think he has the slightest idea about the capital gains tax; I don’t think he understands how it works. I don’t think he understands the basic elements of the US economy. How can he? He’s been listening to Jeremiah Wright for 20 years. I don’t mean that lightly. You laugh at it all you want, but I’m dead serious about it. Jeremiah Wright understands because he’s figured out how to get the church to buy him a $1.6 million house with ten million left over to furnish the thing while telling everybody else to avoid middle classness. But he vamps, gets a question, says whatever he thinks he has to say, whatever sounds good. Let’s go to The View. He was on The View today. The Arousal Gap is back. The View gals are just swooning over Obama today, telling him he’s sexy like Brad Pitt. Joy Behar said, ‘I have to say just one other thing bad before we go to the serious stuff. I understand that you’re related to Brad Pitt in some way. How are you related to Brad Pitt?’ 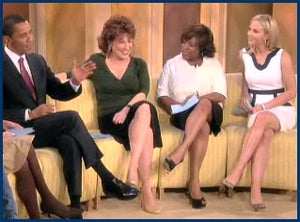 OBAMA: I guess we’re ninth cousins something removed or something.

OBAMA: I think he got the better-looking side of the gene pool —

WALTERS: I was saying just before you came on, maybe we shouldn’t say this, but we thought you were very sexy looking.

RUSH: I told you, the Arousal Gap is back. That was Barbara Walters on The View today. Barbara Walters then said, ‘Look, if Reverend Wright’s still there, would you then have left the church or have said, ‘I just can’t have anything to do with him?”

OBAMA: Had the reverend not retired and had he not acknowledged that what he had said had deeply offended people and were inappropriate and mischaracterized what I believe is the greatness of this country, for all its flaws, then I wouldn’t have felt comfortable staying there at the church.

RUSH: For all its flaws. I don’t believe any of this. He put the guy on his campaign. He was an advisor to his campaign. Elisabeth Hasselbeck, ‘The person who you chose time and time again to be your spiritual advisor, when he says and characterizes the USA as you said wrongly, US of KKKA, that the chickens are coming home to roost after 9/11, suggesting that we got what we deserved, you chose him again to marry you, to baptize your children, you named a book after one of his speeches. For 20 years, would you think that somehow suggested it was a lack of judgment in the man? You had no idea, you never heard about these sermons?’

OBAMA: What you’ve been seeing is a snippet of a man. Imagine if somebody compiled the five stupidest things you’d ever said and put them in a 30-second loop that was played every day for two weeks —

HASSELBECK: But some of these are sold on the DVD at the church.

OBAMA: Well, I understand, but I don’t buy — I don’t purchase all the DVDs, and I didn’t read all the church bulletins. It’s not to excuse it. There were some things, as I said, that I disagreed with him on. But I didn’t see some of the things that were said that I would have taken offense to.

RUSH: Wait a minute, he just gave a speech where he said he did, didn’t he? This is a carnival barker. You know, this is a carny. This is a guy who will say whatever he thinks the people at the group at the time want to hear, without regard for what he said the day before, the hour before, the week before. Here is what Obama’s talking about. How many of you out there have said five things this racist, this hateful, and this stupid?

WRIGHT: Barack knows what it means to be a black man living in a country and a culture that is controlled by rich white people! Hillary ain’t never been called a nigger. Bill did us just like he did Monica Lewinsky, he was riding dirty. In white America, US of KKKA, black men turning on black men. I am sick of Negroes who just do not get it. Not God bless America, God (bleep) America, it’s in the Bible, for killing innocent people, God (bleep) America. And now we are indignant because of stuff we have done overseas is now brought right back into our own front yards! America’s chickens are coming home to roost.

RUSH: Yeah, well, this is five things here we’re going to loop and play ’em over and over again, and I didn’t buy all the DVDs. He’s insulting our intelligence if he thinks these are the only things that this guy has been saying. Elisabeth Hasselbeck said to Barack Obama, ‘Do you have a relationship with Reverend Wright now?’

OBAMA: I talked to him after this — this episode. He had come back from a cruise, and, you know, I think he’s — he’s saddened by what’s happened.

OBAMA: And I told him, look, you know, I — I feel badly that he has been characterized just in this one way, and people haven’t seen this broader aspect of him. But he was my pastor. You know, one of the things that I think people overstate is this notion of mentor or spiritual advisor —

RUSH: You said it!

OBAMA: He was a pastor in the sense that he’s somebody where you go to church, you talk to him about my faith in Jesus.

RUSH: Look, Barack, we have it. It’s in the record. You are talking to Jeremiah Wright and you said to him, ‘You and I know, I have to throw you under the bus, bro, at some point. Your sermons are way out there. I’m going to have to. You know this day is coming.’ They talked about it. This was a strategeric plan. We’re screwed. It doesn’t matter. None of this matters because we’re just screwed.