The Truth About the Economy

RUSH: Ft. Lauderdale. This is Paul. Great to have you on the program, sir. Hello. Hey, what’s happening, what’s up, what’s going on, hello?

CALLER: Longtime listener, first-time caller. I’m so glad I was able to get through to you.

RUSH: I’m glad you made it.

CALLER: Thank you so much. You’re the real American hero. I’ve been listening to you for so long, and I wanted to talk to you for so long, on so many subjects, but I just want to mention one thing about the economy. Right now everybody’s saying and touting in the mainstream media and even in the news outlets that wonderful things are happening because of Obama’s policies for the past eight years, whatever, six years, and all these kinds of things. But one thing I think they’re all missing is there are 35 to 37 Republican governors in the 50 states of the United States of America, and they’re working day and night and hardworking, bringing the budget to balancing and having the surplus in their budgets and bringing down the unemployment rates —

CALLER: Yeah, these are all the facts, and that adds up to the national level and Obama is running around saying, look, his policies are working. It is exactly the opposite —

RUSH: Speaking of that, we just got — did I put it at the bottom? Mike, you just got an Obama sound bite, and I’ve already put it away. I don’t even know what number it was. But it’s the last one that came in. Maybe 24. Grab 24. Here’s Obama. Yep, yep, yep. Yeah, he’s out on the campaign trail and he’s talking about, on purpose, one day after this massive attack in Paris, he’s out there talking about how great everything is, how the economy’s back and how the wars are over.

RUSH: They planned on saying this six years ago no matter what was happening. He’s in Phoenix at Central High School where he said this today. Now, I have to be very careful here because the economy is up, but it isn’t as robust as he’s portrayed here. It just isn’t. And if you think the economy’s roaring back, but you feel left out and wondering why, you’re not left out. The fourth quarter GDP rate was indeed, until they revised it, 5%. And over half of the spending, over half of the consumer spending that created a 5% growth rate was people mandated to buy health care.

Do you think health care is a, “Hey, man, let’s go get some health care today. Man, wow, cool,” as, “Hey, man, there’s a new flat screen, it’s on sale at Best Buy. Let’s go.” People don’t go out and buy health care. It’s a mandated buy. It’s over half of the economic growth. But there are people who do not have health insurance today who had it two years ago. It’s the exact opposite of what he’s saying. They can’t afford it. And all this other stuff. But this is the plan now. Again, it’s symbolism over substance, and it’s the launching of the final two years here. A giant image being created. Get used to it.

RUSH: Obama was gonna say what he said in Phoenix today regardless of any other current event. He talked about this great economy going on and how the wars are over, and he did not even mention what happened in Paris yesterday. There are workers today with jobs who didn’t have jobs last year.

The sad reality is that the labor force participation rate, which is a calculation of a percentage of available people who are working, is at an all-time low. We are very close to 93 million Americans not working. We have lost millions of jobs from the job universe since Obama was immaculated in 2008.

We’re paying people four years to not work. And we’re paying them enough that they’re all eating and drinking pretty much what they want, which is the primary reason anybody works, that and shelter. So we’ve got college graduates, Millennial age graduates who cannot find any openings in their careers of choice. We have more people’s jobs being converted from full-time to part-time so that their businesses do not have to provide them with health care, which forces them into a government or state exchange. It’s a total mischaracterization to portray what’s happening economically in this country as this roaring rebound recovery. It isn’t.

To the extent that the US economy is rebounding is a testament to the American people, not government policy. The policies in place in the last six years are punitive when it comes to work and they’re punitive when it comes to business. Let me illustrate this for you. I’m gonna give you some tax increases that went into effect on January 1st. Now, many of these you will not be aware of yet. Many of these will not hit you until you either file your tax return next year, or if you are an independent contractor and file quarterly, then you’re gonna find out in April how you’re getting socked.

The top Medicare tax has just gone from 1.45% to 2.35%. Let me explain the Medicare tax. The Medicare tax is on top of your Social Security payroll tax, which is FICA, on your pay stub or your direct deposit form. And there is a ceiling on salary that is deducted, where payroll taxes are deducted. I don’t know what that ceiling is. But at that point — I’m gonna make up a number, and it may be close. Let’s say it’s $125,000 a year. Every dollar above that you earn, you no longer have that deduction, whatever the number is.

Now, most people probably never reach the ceiling, but a lot of people used to. Medicare’s on top of that and there’s no ceiling. It is now 2.35% on every dollar you earn, there’s no matching, like there is on FICA. You know, that’s a myth anyway. The Social Security tax supposedly is 13, 14%. You pay 7%, your employer pays seven. See, you spread the burden. In essence you’re paying it all. And the way that works is, that’s what it cost to hire you.

Now, Medicare, if you’re an independent contractor, you pay this new 2.35% on every dollar you earn. There is no ceiling to this. It’s not just ICs, but it especially hits them hard. The only way that you can change that is to classify a portion of your income as something other than ordinary income, which is why a lot of independent contractors file as Subchapter S corporations and pay themselves a salary. So let’s say a small business, a Laundromat or a dry cleaner, just to pick one, and I’m gonna make up numbers. I’m not even attempting to get close here.

Let’s say a dry cleaner owner, an individual files as a Subchapter S corporation, which means many things, but among them the entire amount of income the dry cleaning firm takes in is X, but he can designate only so much of that as salary, and the rest of it as bonus. That’s not ordinary income, so that’s one of the ways that you can avoid paying all Social Security tax, and it’s legal. It’s set up. John Edwards made a big deal out of. He did this. It’s totally legal. You shouldn’t be critical of people that do it. But not everybody can file as a subchapter S. A standard employee cannot do it. You really do have to be self-employed or independent contractor.

In addition to the Medicare tax going up, which is a biggie, but these things all add up together. This is just the first one. The income tax bracket, the top income tax bracket, as of January 1st, goes from 35 to 39.6. The top income payroll tax goes from 37.4% to 52.2%, meaning the ceiling comes way down. Capital gains, 15% to 28%. Now, as a percentage increase, that is huge. It’s almost a 100% increase, and the impact, therefore, on people who pay it is gonna be profound. 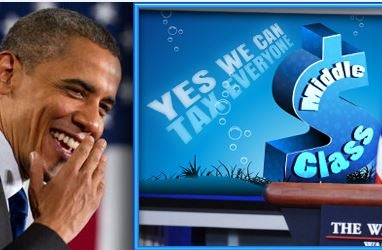 Well, that caused revenue to flow into Washington like they hadn’t expected, ’cause of the dynamics, they never interpret. So Obama said, okay, I’m gonna raise it 28%. People said, “You’re gonna reduce the amount of revenue you raise.” Obamas said, I don’t care. This is about fairness. It’s not fair that some people should only be paying a 15% tax rate.

But the 15% tax rate is on the sale of assets. It’s not income, it’s not what you make at your job. It’s from the sale of a house or a stock, bonds, what have you. And the low rate promotes investment. Raising this rate is going to end up being punitive and it’s gonna have a negative impact on economic activity and money collected in the Treasury.

The dividends tax. This on top of capital gains. Dividends tax, 15% to 39.6%. What this means is that there will be fewer dividends paid, which means less return on investment to shareholders, in a convoluted way.

The estate tax went from 0% to 55% as of January 1st of this year, and there’s one thing I want to tell you about all these taxes, every one of these. Every single one of these tax increases — and by the way, these do not include the Obamacare tax increases, which, in addition to your deductibles being up sky-high, and your out of pocket being up sky-high, there are taxes galore associated with Obamacare that you will slowly stumble into during the course of the year as your activity forces you up against these new taxes. But every one of these tax increases I just mentioned were all passed with only Democrat votes.

Not a single Republican voted for these tax increases.

Now, you might come across the news that the Republicans are gonna be beating their chests like Tarzan, “Hey, we just really made a big dent in Obamacare. We’re gonna succeed in getting rid of the medical device tax.” It was gonna fall anyway, but don’t be fooled. Do not fall for the trick that that means Obamacare’s on the way to being repealed. It’s a smoke screen effort to make you think serious action is being taken against Obamacare. So far, no indication that any is.