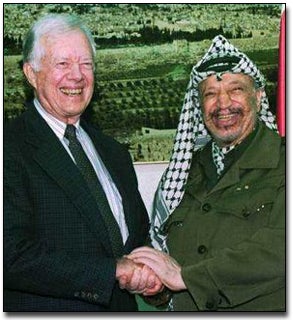 RUSH: Jimmy Carter has made news. This was ABC’s This Week with George ‘Stephy’ Stephanopoulos. Stephanopoulos said, ‘President Carter, you’re going to be the highest-ranking American ever to meet with the president of Hamas,’ or the leader or the head terrorist of Hamas. ‘His group is labeled a terrorist organization by the US, and the State Department advised against the meeting. Why are you doing it, anyway?’

CARTER: As a matter of fact, uh, I’ve been meeting with Hamas leaders for… years. As a matter of fact, ten years ago after Arafat was first elected president of — of PLO and the Palestinians, uh, we were monitoring that election, and I met with Hamas afterwards. There’s no doubt but — in anyone’s mind that if, uh, Israel is ever going to find peace with justice, uh, concerning the relationship with their next-door neighbors, the Palestinians, that Hamas will have to be, uh, included in the process.

RUSH: Everybody is running around trying to explain this. Everybody wonders: What in the world is going on with Jimmy ‘Aziz’ Carter and his diabolic meeting with Hamas? Some people say it’s because he Israel, and other people are saying that he wants to be Jimmy of Arabia, that he’s got this megalomaniacal concept here that he can bring all these warring factions together. Other people say that he’s acting like Bill Clinton and trying to build a legacy.

I have a simpler explanation to explain Jimmy ‘Aziz’ Carter. I think he’s suffering from Stockholm Syndrome. I’m serious. I think this needs to be looked at. Carter was virtually held hostage the last year of his presidency. I went to AskYahoo.com for a reasonable explanation of the Stockholm syndrome. This is what I found. ‘Captives begin to identify with their captors initially as a [defense] mechanism, out of fear of violence. Small acts of kindness by the captor are magnified, since finding perspective in a hostage situation is by definition impossible. Rescue attempts are also seen as a threat, since it’s likely the captive would be injured during such attempts. It’s important to note that these symptoms occur under tremendous emotional and often physical duress. The behavior is considered a common survival strategy for victims of interpersonal abuse, and has been observed in battered spouses, abused children, prisoners of war, and concentration camp survivors,’ and now former presidents of the United States of America. I just threw that in there. But this explains it as well as anything else. He’s lost his mind! He’s monitoring Hamas elections! So Jimmy ‘Aziz’ Carter… By the way, he weighed in also on what to do with the superdelegates and he said he’s not going to endorse until the convention — which we love. Operation Chaos! Stephanopoulos said, ‘Speaker Pelosi has said the superdelegates, President Carter, should not overturn the will of the people, that that’s not what they’re supposed to do and that they should basically vote for and not overturn the winner of the pledged delegates. Do you agree with that standard?’ 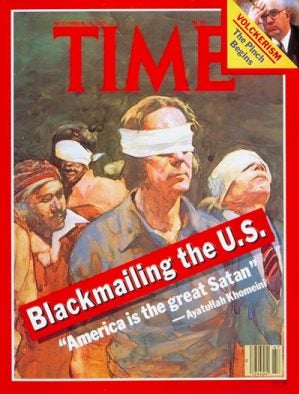 CARTER: I think that any superdelegate who wishes to deviate from that, uh, opinion should be perfectly free to do so. Uh, my hometown, my county, my state went overwhelmingly for Obama, but if I decided later on to support Mrs. Clinton, I would feel free to do so. But I think it would be a very serious mistake for the Democratic Party if, for instance — I’m not anticipating what’s going to happen for the next, uh, contest, I think there are about a dozen of them if — a candidate had, uh, the majority of popular votes, the majority of delegates, and a majority of states, all three; for the superdelegates to vote contrary to that I think would be very difficult to explain.

RUSH: Yeah. It might be, but this is the thing I keep coming back to: . If you’re going to say that they have to follow the will of the pledged delegates, then why have ’em? The whole point of the pledged delegates is to prevent the party from nominating another McGovern — and maybe another Jimmy Carter! If you take that away from them, then the superdelegates don’t matter. Why have them? So, Obama can sit here in San Francisco and say that small-town America is made up of a bunch of angry, gun-toting, cross-bearing bigots who don’t like people that don’t look like them, and they’re only mad because the government’s forgotten ’em. What can you say about the Democrat Party’s view of its own voters? They don’t have enough trust in the intelligence of their own voters to elect a nominee, so they’ve got these superdelegates to save the day in case regular Democrat voters botch the process.