RUSH: I want to say something about this cyclone, this hurricane, in Burma. I know they want to call it Myanmar, but it’s Burma. You probably heard that this hurricane claimed 22,000 lives, and they’re now projecting that 50,000 people might have died from this storm. It could be even more than that, mostly from drowning, a 12-foot storm surge. When a tragedy like this happens, the reason I want to spend some time on this, not much, but I just want to put a thought in your head, when a tragedy like this happens we need to remind ourselves of the main reason why humanitarian disasters continue to occur. It is due to one simple fact, maybe not just one, but I think the central characteristic here of these massive humanitarian disasters is that when people are denied freedom, the results can be deadly. Millions of poor people in Burma live on a floodplain right along the coast, and the reason they do is because they have to raise enough rice to support their families. They have no freedom. They have no freedom to move around. They have no property rights or anything else. They have to live where they live right in the target of a floodplain, just to be able to eat. 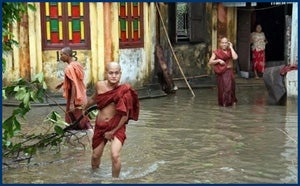 The dictatorship did not bother to warn people about the storm in time, and even if the dictatorship had, most of the people don’t have electricity, let alone television, so they would not have gotten the message. They were sitting ducks. Now, you can contrast this with the poor people in New Orleans, who did hear the warnings before Hurricane Katrina. At least they had the freedom to choose to stay or to leave, which helps illustrate the fact that we have the richest poor people in the world. They had every warning available to them, they all had televisions, most of them had cars, or they had ways of getting out. They had the freedom to choose whether to leave or stay. That was not the case in Burma. So what we have here, folks, we have one more example of what can happen when people are denied freedom, freedom to own property and to benefit in proportions to one’s own creativity and hard work, and a lot of people are going to blame this on global warming and climate change and all this, and all these poor people. This was going to happen. There have been deadly hurricanes like this in the past in that part of the world, as well as tsunamis, and the number of people that are killed in these things in these poor countries, there’s a reason for it. It’s because these poor people have no means of being warned, they have no mechanism to get out even if they are warned, and they have to live in floodplains and other areas that are prone to suffer the greatest damage during the disasters like this, precisely because they don’t have the freedom to move around and live elsewhere.

Protesters in Burma, by the way, have been risking their lives in recent months, speaking out against the dictatorship there, calling for Democrat reforms. We’re in the process here very slowly and very surely, though, of giving up our freedoms, little by little, every day we cede our freedoms under the rubric that it’s for the common good, or it’s to save the planet or we’ve gotta stop being mean to trees or what have you. We are sitting around and letting ever-enlarging governments — state, federal, local — take away our freedom. Give you an example. I was shocked. I wish I had this letter here to read to you. I left it in my computer at home. I could probably still get it. As you know, one of the things that really bothers me where I live is these restrictions on turtle lights at night. Now, stay with me on this. This is not about the turtles. They just happen to be the reason the environmentalists have won here. Those of us who live on the beach, starting March 1st, have to turn out all lights that could be seen by turtle hatchlings on the beach at night, because theoretically — and this hasn’t even been proven — theoretically light attracts the hatchlings away from the ocean where they’re supposed to go.

They don’t show up, the turtles don’t show up to lay the eggs until May. But we have to turn the lights out March 1st. Environmentalist wackos. I’ve had them call the cops on me when I was in compliance with the ordinance, had to go out, talk to the cops, didn’t know the ordinance, didn’t even know what it was. This woman was complaining, said she’s a big fan, it was raining cats and dogs, had to walk out there to the gate with an umbrella. There was beach preservation work going on at the very beach where these turtles come up and lay their eggs. And they’ve been granted an exemption, the workers. They’re dredging the inlet and they’re gonna dump the sand on the beach, gonna pipe the sand further south to help nourish the beaches here. They’ve been given a variance to work on this ’til May 15th, May 15th because that’s when turtle season begins. Yet March 1st we have to turn out our lights in the back. In my case they’re security, they’re decorative, you know, the landscaping lights, and I like it. But I can’t. I have to turn ’em off March 1st or be in violation of some stupid law.

So I’ve been talking to people about it, you know, not complaining about it on the air, talking to people who might be able to do something about it, and they showed the letter from the Florida Fish and Wildlife services to the crew, the construction crew putting sand on the beach from the dredge. This is the most frightening thing. The power these little bureaucrats have and wield and the penalties that they threaten and so forth illustrated to me just how much freedom we have lost here and how ingrained the bureaucracies are in usurping it and then lauding it over everybody’s heads, and in this case there is concern for everything except people and property owners. Same thing in Myanmar; same thing in Burma. Those people had no freedom. They live in a dictatorship for one thing. They hadn’t the ability to get out of there. They have to live in the most dangerous places. That’s why there are mass deaths such as the tsunami, this cyclone, previous cyclones, 50,000 people may have died. That’s not going to happen in the United States of America because we have freedom, people can get out of the way, there’s enough warning, everybody hears the warnings. If they don’t, it’s their fault. But here, in this case, zilch. 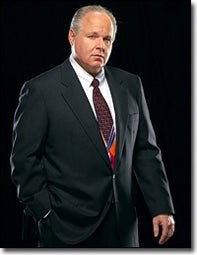 In the meantime, we’re continuing to give up our freedoms in this country, and these people are risking their lives so they might have access to what we’re throwing away. Now, when the environmentalist wackos hear about weather disasters like this, they think global warming, but when conservatives hear about these events, we need to remind ourselves of the fundamental importance of bringing freedom to humanity, freedom that allows people to use the brains God gave us to protect ourselves from storms, storms that are going to come anyway, they have always been there, they’re always going to be with us. It’s not unique. This has nothing to do with global warming. These things happen constantly. It just shows the extent to which we have taken our freedoms for granted in this country that the word ‘freedom’ never is brought up in either of these presidential campaigns. Not McCain’s, not Hillary’s, not Obama’s. Nobody’s talking about freedom. Nobody’s talking about happiness. Nobody’s talking about American exceptionalism. Everybody’s talking about doom and gloom. There is no happiness in American politics today.

There’s no happiness in politics, so it bleeds into the people that pay attention to it. Hence Operation Chaos, an attempt to have a little fun with this, and involve Republicans in what would otherwise be one of the most boring political periods ever. Who cares who wins this primary? One of them is going to win it. To have to sit here and watch the Drive-By Media salivate all over this as though it’s the greatest thing since sliced bread. Operation Chaos saw a need, we got in there, and we’re getting it, and we’re gonna soon be getting out because it’s going to have been proclaimed successful by me, and it has met and exceeded all of our objectives here, as we have chronicled. But we in this country take our freedoms way too much for granted, and we need to preserve them here at home not only for our own well-being but so that we can also help others around the world do the same thing. If you can believe it, the leadership in Burma has not yet determined whether or not they’ll accept international aid. They don’t care about these people, probably fewer mouths to feed. If you get into the tinhorn dictatorship palaces and offices, they’re probably rubbing their hands together in glee saying that ultimately in the future this is going to help them become more prosperous because no more people to feed, 50,000 people are dead. It’s a sick way that dictatorships look at it, but that’s most of the world. We’re the exception. And yet we get blamed.