CHENEY:  Hello Rush.  This is Dick Cheney.  I’m a big fan of your show, as you know, and I’m sending good wishes to you as you mark your 20th year on the air.  This great achievement testifies to your hard work and to the high standard of excellence that’s become your trademark.  You are without question one of the great names in broadcasting history.  I’m proud to know you, proud to call you a friend, and I look forward to listening for many years to come.  Congratulations.  Keep up the great work.RUSH:  Ah, this is cool.  I just get goosebumps as I hear these accolades and these tributes.

BUCK: Hey, this is Joe Buck from Fox Sports calling to congratulate Rush. You know, they say you can really judge how a person truly is when the cameras and microphones are off. I can say hosting my own children’s hospital golf event here in St. Louis, Rush, at his own expense, six years in a row paid for himself to fly in, he was a part of it, he was great to everybody involved. He is truly a genuinely good guy. And so I want to say congratulations to a guy who might be as sickly involved with the game of golf and as obsessed as I am. Here’s to 20 more, man. Congratulations.

RUSH: Joe Buck, Fox Sports, he’s their number-one announcer for baseball and the National Football League. I got to know him through his dad, Jack Buck, who I admired tremendously. Thanks Joe, very, very much. Appreciate it.BREAK TRANSCRIPT

THOMAS: Hi, Rush, this is your friend Clarence Thomas. Virginia and I congratulate you on your great, great career, and thank you for all you’re doing and for giving us just such great information and entertainment and laughs and everything else. You’ve been a great friend and a great patriot. We wish you many, many more years and we hopefully will see you soon and spend a lot more time together. Congratulations, my friend. Bye. 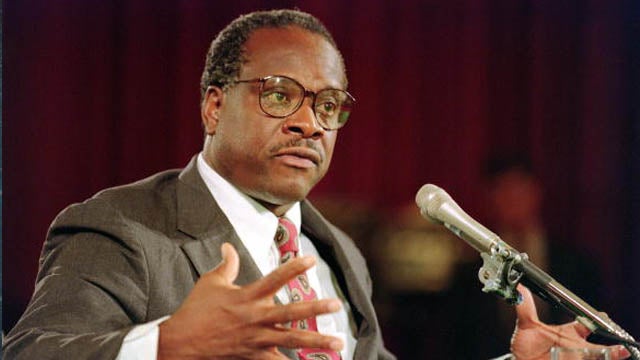 RUSH: Wow, Justice Clarence Thomas. You know, he’s become a very close friend, and he’s one of these people I wish everybody could know him the way he is rather than the way he’s constantly portrayed. He’s one of the happiest, the most jovial, most intellectually engaged people. Since the Anita Hill stuff, I’ve never seen him in a bad mood. I have never seen him less than jovial, and his wife Ginny, these are just two of the nicest people. I’m honored to be able to count them among my friends.

WILLIAMS: Hey, Rush, it’s America’s Anchor… Uh, hang on a second. Well, anyway, it’s the anchor of NBC Nightly News in New York. An interested listener, let’s put it that way. It’s Brian Williams, congratulating you on a great run. I know you’re just getting warmed up. Go get ’em.

RUSH: He was going to call himself America’s Anchorman and he stopped himself, because he realized he’s not. (laughter) Brian is another one of these guys people don’t know about. He is hilarious in private. He is as funny as you can be. It’s a shame that in the solemn world of the presentation of the news in the Drive-By Media, he does not get to demonstrate that.

HUTCH: Hey, Rush, how you doing? This is The Hutch. Just wanted to call and congratulate you on 20 years. That’s come from the only true black friend you have. And don’t even go down the road about Bo Snerdley. He works for you. You pay him. He has to smile at you. But I am the man who does it for free. Hey, bro, congratulations, and when I get my jet certification, I’ll even fly your jet for free ’cause that’s the only way we gonna hang out. Love you. Have another great 20 years, and I hope I’m here to hear every one of them.

RUSH: The Hutch. I met The Hutch on a salmon fishing trip with Paul Westphal and Howard Slusher up at Vancouver Island and he’s become a close friend, former linebacker of the National Football League for the Cowboys. He was a mike linebacker, by the way, the Dallas Cowboys, the Seattle Seahawks, and of course the San Diego Chargers.

STEYN: This is Mark Steyn. Congratulations, Rush, on a fabulous 20 years. But it’s just the beginning. Take it from a foreigner: Queen Victoria was on the throne 64 years. You’re just getting warmed up. Here’s to the next 44. Congratulations.

RUSH: Thank you very much. That’s an interesting perspective. Mark Steyn. The tributes and the accolades continue. I must say, at the beginning of the week I was rather embarrassed and a little tingly. (laughter) I’m getting used to it now