LA Times Tribute to the Pilgrims

RUSH: Here’s Jennifer in Los Angeles. Great to have you on the program, Jennifer. Welcome.

CALLER: Hi, Mr. Limbaugh. Thank you very much for taking my call.

CALLER: And happy Thanksgiving to you. 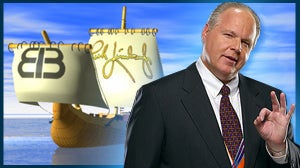 CALLER: I just wanted to thank you for something. I was listening to one of your broadcasts, and you spoke about the story of the Pilgrims at Plymouth Rock. And I remember that story from fifth grade where the Pilgrims did not really… They just eked out a miserable existence until they changed their political philosophy.

CALLER: That’s right. And so each Pilgrim was given a lot, a piece of land. And instead of all contributing to one common store, they were able to keep what they made.

RUSH: Jennifer, what school did you go to that taught you this? Because my school didn’t.

CALLER: I’m in California. I went to San Bernardino. It was called the Elliott Elementary School. Mr. Robert Nelson was my teacher.

RUSH: You gotta be kidding! A California elementary school told you the truth about Thanksgiving?

CALLER: Well, the lesson that day was about a word and the meaning of the word ‘incentive,’ and he used that to illustrate what incentive could do. So, anyway, I work at the Los Angeles Times and edit a page called The Kids’ Reading Room page and it’s on the website right now. It’s LATimes.com/kids. There’s a story called Giving Thanks about Thanksgiving. It’s a tribute to the Pilgrims at Plymouth Rock and it’s about a contemporary family sitting around Thanksgiving and talking about the Pilgrims and who they were. I also want to thank you for this. I started doing research on the Bradford book, and the Pilgrims were fantastic! I mean, they were very young; they were courageous; they were ingenious.

RUSH: And they were fleeing Obama-type tyranny from the mother country.

CALLER: That’s exactly right. It was like the first time in the history of mankind that anything so extraordinary had happened; and it was contagious because the Massachusetts Bay Colony copied that model that they had initiated.

RUSH: You have made my day. You have arranged for this to be in the LA Times over the weekend and on the kids’ page?

CALLER: Yes. It’s in the Sunday comics, comics 1. That’s where The Kids’ Reading Room page is.

RUSH: That’s the best place in that paper for it.

CALLER: I view the kids’ page as the most important page in the whole paper.

RUSH: You are doing the Lord’s work. Jennifer, you have made my day. I’m going to have to repeat a shortened version of the Thanksgiving story because Obama voters are now listening and they don’t know what it is. So I’ll do that when we come back.

RUSH: Jennifer from Los Angeles, her name is Jennifer James. We found her story on the Los Angeles Times website. It runs this weekend. It’s up there now. It will run on Sunday, I think she said, in the kids’ section of the LA Times. It’s the true story of Thanksgiving, and she was calling here to thank me for reminding her of the real story that she was taught, inadvertently, in the fifth grade at an elementary school in California. The teacher was teaching a word for the day, ‘incentive,’ and he used the true Thanksgiving story. I’m sure it was an oversight on the part of the teacher. (laughing) I wonder where he learned it? Jennifer, if you’re still out there, you have more courage than anybody I have met recently. You called here, you identified where you worked, you thanked me. I am the mortal enemy of the Drive-By Media and those typified by editorial and journalism staff at the Los Angeles Times. The paper is dying, I know, but a good friend of mine runs the company now, Tribune. Randy Michaels. So I got mixed emotions about it. If they could straighten the place out, it would be fabulous. Anyway, Jennifer, it was a courageous act for you to call here and mention your name and cite your story in the LA Times: the true story of Thanksgiving. So I hope that you survive, your job survives your phone call to the EIB Network.

Here’s the basic true story of Thanksgiving. First, here’s what we’re all taught. We’re all taught that the hapless Pilgrims arrived here quite by accident and by luck. They landed at Plymouth Rock and they found this barren place, and they had no clue how to feed themselves. They had no clue how to survive. Basically the first white settlers, they brought with them syphilis and gonorrhea and environmental destruction, racism, sexism, all that. They had such trouble that the wonderful Native Americans — the Indians, who (unbeknownst to them) were about to be conquered and put into revelations and made into alcoholics by the Pilgrims — were so overcome with compassion and love for the arrival of these new, weird-looking people that they showed them how to grow food and corn and maize and even told them how to do popcorn. They told them how to slaughter turkeys long before Sarah Palin learned how to do it, and fixed this big feast to share the bounty of the Indians with these stragglers who had shown up and not known where they were — and that’s the ‘true’ story of Thanksgiving as taught in schools. It’s not at all what happened.

The Pilgrims arrived, and it was barren, and it was challenging, and there was disease — pestilence — as you can imagine. This is hundreds of years ago. William Bradford writes about this. He was the original governor of the colony. They decided to set up a system whereby everybody would be given a plot of land, and then whatever they produced would go into a common store. It was one of the first known experiments with socialism and it was based in all the great compassion and fairness that you would think. ‘Put in what you do and take out only what you need,’ and the whole point was that this common store is going to have the fruits of everybody’s labor. Everybody is going to go in there and take out only what they need. Well, the problem was human nature reared its head, and a bunch of slackers amongst the Pilgrims realized they didn’t have to do anything in order to go get what they wanted from the common store, because other people were carrying the weight, pulling the wagon.

Bradford realized after awhile this did not work. Resentment was cropping up amongst the producers for the non-producers. The non-producers were taking everything more than they needed. They just took what they wanted. They said, ‘Well, we’re entitled to it! I mean, these are the rules.’

They said, ‘Yeah, but you’re not producing anything.’

‘Well, nothing says I have to. It just says that whatever is produced is going to go to the common store.’

Some of them weren’t good at farming. They weren’t allowed to specialize. They were just given a plot of land and told, ‘Here, do what you want.’

Some, all they could do is clean up the manure and others were able to turn the manure into fertilized land and grow things. So Bradford finally figured out this wasn’t going to work and they reassigned everybody a plot of land and then they said, ‘Whatever you do with this, you keep. It is yours. And if there’s a surplus, you can sell it.’ That’s what ultimately happened, and that’s when the Pilgrims began to prosper, and it was at that point that they shared their bounty with the Indians. It was sort of a joint sharing of things. The Indians already knew about popcorn and that stuff, but they shared it. The true story of Thanksgiving, as Bradford writes it, is thanks to God. It was thanks to God for helping them learn the way to survive and prosper when they arrived in this new barren, forsaken, unknown place. Remember, now, this is Massachusetts in the wintertime. There was no Mass Turnpike, and there weren’t any department stores and food stores. We can’t relate to it. We cannot understand it. So the first experiment in capitalism in the new world, bammo! It went like gangbusters, and that’s what Jennifer writes about — Jennifer James is her name, writes about — in the Los Angeles Times in the kids’ section this weekend.