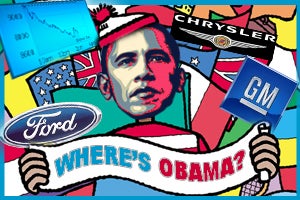 come back with a plan. You tell us what you want for the $25 billion.’ Okay, I have some questions for the people like Pelosi and Reid and these other liberal hacks, just tough questions for you to ponder. With gasoline prices now under two bucks in most places and dropping, and the price of oil (I checked it right before the program) below $50 now ($49 a barrel it was earlier today). So with the gas price under two bucks and oil plummeting, what would you say, Pelosi and Reid, if the car companies could become profitable by selling SUVs or go broke by turning out the green cars that you’re going to demand they make? What would you say, Pelosi and Reid, if the best auto executive in the world could come in and fix the Detroit problem but he demands a hundred million dollars a year in income? Would you insist that they hire somebody who has no clue what they’re doing and earns less than $400,000?

If the auto executives came back to you and say that they can turn profits if they tear up all existing labor — this is what I wish they’d do, I wish Nardelli and Wagoner and Mulally would come back and say, ‘You want our idea? You want to know what we need to succeed? Fine. We need to tear up all our existing labor contracts. We need to eliminate all these CAFE standards that you placed on manufacturing. That’s what we need; that’s what we need to do. We can turn this business around if you get the shackles off of us.’ What would they say? You know damn well what they would say. They’d say, ‘Screw you, because we’re going to run the auto business now.’ Barney Frank is going to say it — and I have another question for these liberals. You’ve been attacking the Big Three auto companies all of your political careers. Why are you defending them now? You’ve been attacking them, you have been making them out to be the enemy just like Wal-Mart’s the enemy, just like Big Drug is the enemy. Big Oil is the enemy. Anything big corporate has been the enemy of Ted Kennedy on down. Now, all of a sudden, you find a need after you’ve had your role — and let’s make no mistake about this — Congress has had a role in destroying these companies, or harming them greatly, and now all of a sudden you want to defend ’em? Why? Why are you defending these companies that you told everybody else were evil? 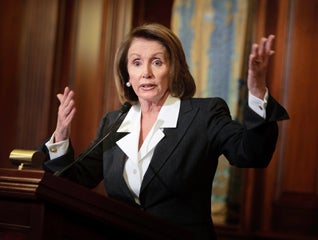 RUSH: Breaking news from ABC: General Motors is grounding its corporate jets. Well, so much for my dream and desire. Well, my dream and desire was that they would come back and say, ‘Okay, you guys need a plan by December 2nd? Here’s the plan. Pelosi, Reid, you want a plan? You drop the CAFE standards. You let us get rid of some of these union contracts and so forth. You let us start all over and run this business the way want to run it. You don’t tell us what kind of cars we gotta make. You let us do that, and we’ll be off and running. You asked for the plan, Washington. Here it is.’ Now, I know they would never do it because they wouldn’t get any bailout money if they did that. But still, they’re grounding the corporate jets because of the bad PR. As though that’s going to help! Ain’t going to help! (By the way, EIB 1 is not grounded. Don’t worry.) But the guys on Washington on Capitol Hill, the Democrats, are just going to smile and clap their hands and say, ‘We cut guys down to size,’ and they’re going to love it.

I have a solution to the economic problem, ladies and gentlemen. I might be able to solve it by January 20th. As we know, we’re told now, four million people will be pouring into Washington, DC, for the inauguration of Barack Obama as the 44th president of the United States. There are 240,000 tickets made available for the inauguration, and those tickets are free. My suggestion is to print up four million tickets and auction them on eBay. They could raise billions. Who in his or her right mind would not give up their life savings (or even their future earnings) for a chance to be there? Especially these Obama voters. If they figure they’re going to lose everything in the stock market anyway, why not give it to the government so you can be there at the Obama inauguration? You see, we here at the EIB Network, folks, don’t just point out the problems. We offer solutions. I’ve offered a solution for the Big Three automakers today. I have offered now a solution to solve much of our debt problem by having Obama voters fork over whatever they can and want to on eBay for four million tickets to the Obama inauguration, ’cause that’s how many people are going to go.

That’s what they say. So sell the tickets.