RUSH: You know what I think, folks? I actually ought to name myself an unofficial Obama advisor, because all last week I was asking, ‘Where is Obama?’ I mean, Rome is burning and where is Obama? It’s his plan everybody’s waiting for. It’s stability from his plan, whether it’s a good plan or bad plan, everybody is waiting for it. Lo and behold, in mere moments right after this show begins Barack Obama the president-is going to announce his economic team, ladies and gentlemen. Greetings and welcome. It’s great to have you here. Thanksgiving week begins on the Excellence in Broadcasting Network, El Rushbo back at the Southern Command. Always great to be home. Right on cue, there they come, right as this program (laughing) right as this program starts here comes the economic team to stand behind Obama. 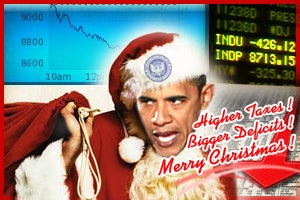 We have Geithner. We have what looks like Christina Romer, who is a big tax cut babe. Did you know that? She’s from UC Berkeley and she’s window dressing, I think, but she’s a big — and there he is! The Messiah has now moved to the podium, ladies and gentlemen. He is going to make some announcements everybody already knows are coming. The stock market today is up a little over 300 points, and this is primarily due to the Citibank bailout. Folks, this bailout… Do you understand the total of these bailouts is now approaching $7 trillion? The Federal Reserve has pledged $7.4 trillion to ease frozen credit, $7.4 trillion, plus all these bailouts, all these stimulus packages. I guess Obama and the Democrats think that we’re idiots here. They’re repackaging his massive socialist agenda, his massive New Deal as a ‘jobs stimulus program’ that will supposedly jump-start the economy. We know where this is coming from, folks.

Do you realize we are going to face…? For all of you who have been hearing from the Drive-Bys over the last eight years about how high the Bush deficit is and how punitive this is and how we gotta balance the budget and so forth, we’re looking — by the time these people finish, these central planners in Washington; by the time they finish, we’re going to have — in this fiscal year, which started October 1st — we are going to have a federal budget deficit of 1.3 to $1.4 trillion. The federal budget in toto is just over $3 trillion, and where we gonna get the money? We’re not printing the money. You can’t just go out and print. We are going to borrow it. We are going to ask people from all over the world, nations all over the world to help subsidize this debt because our economy still determines the fate of the world economy, and they just keep saying $700 billion here, seems like the magic number, like 95% was the magic number on tax cuts and $250 was the magic number on tax increases.

Now we have all these bailouts of $700 billion here, $700 billion there, I am proud to say that I am one of the brave and few in this country not asking for a federal bailout, and I’m very proud to count myself among those not asking for a federal bailout. (interruption) The reason I’m not asking for a federal bailout, Mr. Snerdley, is that I have brains; and I know that I am one of the few, the proud, the brave, that’s going to be helping pay for this. I might have to register as a bank, and I’m perfectly happy to be registered as a radio company. The Democrats, Chuck Schumer, they want to have a stimulus package on Obama’s desk in January, the day he’s inaugurated, of another $700 billion. Here, listen to Obama describe this. I said that he’s repackaging his massive collectivist agenda as a jobs stimulus program. This is from the weekly radio address President-Elect Obama delivered on Saturday.

OBAMA: We’ll be working out the details in the weeks ahead, but it will be a two-year nationwide effort to jump-start job creation in America and lay the foundation for a strong and growing economy. We’ll put people back to work rebuilding our crumbling roads and bridges, modernizing schools that are failing our children, and building wind farms and solar panels, fuel efficient cars, and the alternative energy technologies that can free us from our dependence on foreign oil and keep our economy competitive in the years ahead. These aren’t just steps to pull ourselves out of this immediate crisis. These are the long-term investments in our economic future that have been ignored for far too long. And they represent an early down payment on the type of reform my administration will bring to Washington; a government that spends wisely, focuses on what works, and puts the public interests ahead of the same special interests that have come to dominate our politics.

RUSH: There’s so much here, but he’s laying it out for you. He is promising you here a collectivist, socialist agenda. This is right out of FDR and the TVA and all these make-work projects, building roads, crumbling roads, bridges and so forth; and this is not just a one-step thing, this is the plan for the future. ‘Early down payment on the type of reform my administration will bring to Washington, a government that spends wisely.’ How in hell can anybody in Washington, I don’t care what party they’re a member of, say that there will be wise spending in Washington? The spending is out of control. It’s over. There’s no discipline whatsoever here, and this is being done by politicians who want to cement their power. They’re trying to create as many of you in need as they can, particularly on the Democrat side of things. This is a rerun of FDR. In fact, we harped on the Rahm Emanuel sound bite from last Tuesday about the crisis here being an opportunity.

Lo and behold, in Newsweek, a big, long story here by Michael Hirsh and Daniel Gross entitled, ”Who’s Watching the Money?’ — Yet with the economic news worsening every day, Obama found he couldn’t ignore the growing power vacuum back east. … So pervasive has the panic become that some critics were starting to point fingers back at Chicago.’ Wonder who those critics were? Wonder who these two guys happened to be listening to? Who was it last Thursday and Friday was asking, ‘Where is Obama?’ And, lo and behold, Obama has shown up with the naming of his full-fledged economic team. Let me define ‘spending wisely,’ as Obama means it, and as the Democrat Party means it: ‘spending wisely’ means spending everything and then some. ‘Wise spending’ is a term for the government running as much as they can get their hands on. But listen to this paragraph from the Newsweek story.

‘Some see political motives in all this foot-dragging. Obama may want to avoid being linked in any way to the policy failures of the Bush era. Harvard economist Ken Rogoff (a sometime adviser to John McCain during the campaign) says that by not ‘taking ownership’ of the problem now, Obama can reappear dramatically as a savior on Jan. 20 like Franklin Roosevelt in 1933, thereby reclaiming the commanding heights of US politics for the Democratic Party. ‘It’s exactly the FDR model. The [market] may sink another 10 percent, but then they can win elections for another 10 years,’ Rogoff says. ‘It makes sense politically to hang Bush out to dry, but Obama has to hang the economy out to dry at the same time.’ Obama, in other words, may want to turn crisis into opportunity.’

‘[M]ay want to turn crisis into opportunity’? He is turning crisis into opportunity. This that he is announcing today with his economic team, his speech on Saturday, his radio address, all of this spending. This has nothing to do with reform; it has nothing to do with improving the economy. It will not work, not as you and I define work. It will work for them. It will work for Obama and the Democrats. It will continue to create crisis. It will not create two-and-a-half million private sector jobs. It may create two-and-a-half million government jobs. They could do that overnight if they wanted to, and that may be what they intend.

RUSH: Two-and-a-half million jobs would more than double the federal workforce, or thereabouts, if that’s what he has in mind. By the way, does anybody want to continue the discussion that Obama is governing from the center, that Obama is a moderate? This is full-fledged, FDR, New Deal collectivism that he is outlining; and I listened to a little bit of his announcement ceremony that’s taking place today, and it is pretty much what I thought it would be. He’s making these radical proposals, all of this crazy, unaccounted for spending. But he is doing it with an air of confidence and assuredness that is a continuation of the image. It’s sort of like the way FDR mesmerized people with the fireside chats. He just inspired confidence. He sounds like he knows what he’s doing; he sounds like he’s in charge; he sounds like he’s got his hands in the till on everything, knows what’s going on here, ordering his team around, telling them to get back to him, get something done here soon after he’s inaugurated. Given the nature of our society today and population, this kind of confidence at first will garner support for what Obama wants to do.

RUSH: Now, when Obama started the stock market was up 325. He started his press conference right as this program began. That is not an accident, ladies and gentlemen. The stock market now is down to just over 200, 204.78, so it’s down 120 points, 125 points or so since The Messiah began his meeting announcing his economic team. Once again there were no specifics announced. And that, I think, is going to be pretty common. What he’s trying to do is sell what he will not tell us. He’s going to sell us with an air of authority and confidence and assuredness. ‘Don’t worry, everything is going to be all right. I’m on it. My team is on it,’ and this will work at first. This will give people some pause. I don’t know. I may be speaking out of turn. It doesn’t appear that it has calmed Wall Street. Wall Street’s coming back a little bit now, 226. So it’s down a hundred points. We should specify that the reason the markets launched up today was the Citigroup bailout, not the anticipation of Obama’s team. Obama’s press conference caused a spike. It was as low as 150 points.