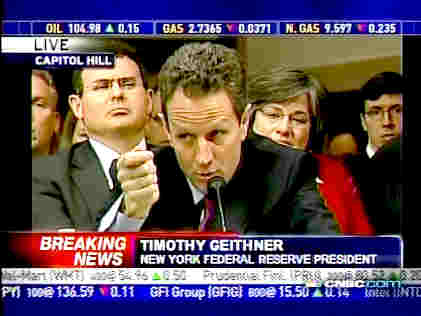 Now, just like when Rahm Emanuel’s dealings with Blagojevich, Obama has thoroughly reviewed Treasury secretary select’s Timothy Geithner’s situation and given it his blessing. Everything’s okay! Obama has cleared his nominee again, so I’m glad that’s over. Having a guy in charge of the IRS with multiple tax issues might have sullied the Immaculate Inauguration, but now that Barack Obama has determined it won’t be a problem, it won’t be a problem. But it was close. It was a close one. Here’s my question. If Hillary Clinton’s massive conflicts and political payoffs don’t bother Obama or his fellow Washingtonians, why should Timothy Geithner’s failure to pay taxes bother anybody? Rahm Emanuel’s frequent contacts with governor cesspool, they didn’t bother Obama.

Very simple. It doesn’t matter when Democrats do this! Democrats can get away with no ethics because they never stand for standards. They never proclaim to have them. Well, that’s not really true. Nancy Pelosi said they’re going to stick to the highest ethical standards. Obama has said he would; Clinton said he would. It’s just rhetoric. It’s just campaign rhetoric. We know they don’t really mean it. Just like don’t really mean much of what they say during the campaign. It’s just breathtaking to watch this. Let us listen to audio sound bites here. Go to audio sound bites. Let’s start with number three. We have a montage here from a senator, Senator John Kerry, and a bunch of Drive-Bys on Timothy Geithner.

KERRY: It is possible to make an innocent mistake. I think this is an honest mistake.

CROWLEY: The transition team put out a lengthy list of reasons why this was just an honest mistake. 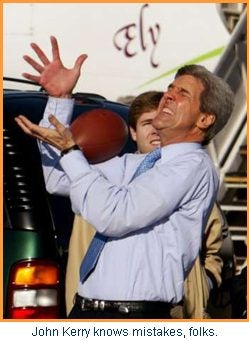 BORGER: … I would not describe as a huge mistake.

HENRY: It is a common mistake.

ALTER: It does seem to be a honest mistake.

SHUSTER: He made a common mistake on his taxes.

BARNES: Yes, it is a common mistake.

STODDARD: The Obama administration is saying it’s a common mistake.

HARWOOD: It is being described as an honest mistake.

STEPHANOPOULOS: This was an honest mistake, fairly common. Geithner himself is embarrassed by this and he’s sorry.

RUSH: Well, what about Kimba Wood? I’m sure she was embarrassed and sorry. What about Zoe Baird? They were made to walk the plank. It’s just so funny. Ha! I know it’s outrageous and it’s maddening and here are the Drive-Bys lining up, but you shouldn’t be surprised by this because I have predicted this. The Drive-Bys are going to line up and protect all of these people except Richardson — and if the Republicans had any gonads they would be asking if there’s racism attached to Richardson being thrown under the bus because he’s Hispanic. That’s another thing. If it is such a ‘common mistake,’ why is there a law against it? But this common mistake business, folks, I’m not buying this. ‘It’s a common mistake, frequently made mistake. He’s very sorry for it.’

Look, the nanny thing, that’s probably a common mistake — and not knowing whether or not your employee is legal or not, that’s probably somewhat common. I’d also say it’s pretty common, you know your employee is not legal, but ‘What the hell?’ But this IMF thing, this is different. When you work at the IMF, they withhold no taxes. You’re self-employed, essentially, which requires you to file quarterly estimates on your income, and he didn’t do it for a number of years. And I think even after he was notified in an audit that he had slipped up here, he continued to commit the ‘mistake.’ Now, this is a guy that’s going to be in charge of the IRS. This is a guy who’s going to be in charge of the Treasury department. Some of this is just… They’re asking us to believe a little too much, that he didn’t know this? Didn’t know he was being paid the gross?

The terms of employment are laid out… Do you know what you have to do in order to be paid the gross? Do you know the hoops you have to jump through to avoid having taxes withheld? It’s just not something you can do. Folks, try this. Go in today or tomorrow and tell your boss you want to be paid the gross. You don’t want any deductions. You’ll handle it yourself. Your boss will tell you, ‘Sorry, it is impossible. The federal government makes me do this. You can’t be paid the gross. We pay money to you and we have to have all of these deductions. We have to report it, you know, quarterly, weekly, whatever it is to the IRS and various other state authorities and so on. No, I can’t do it.’ Then look in to see what you would have to, what kind of job you would have to do to be qualified or categorized as self-employed or an independent contractor, in which you pay the gross.

You know, I get audited by New York City and New York State every year since I moved to Florida; and their assumption is I’m lying to them about where I live, and they make mistakes every audit. In every audit they make mistakes based on faulty assumptions. That’s just a common mistake. Imagine if it were reversed and I was the one making the mistake. I mean, there would be penalties. Whew! I shudder to think. There would be hearings. Wesley Snipes and I would be blood brothers, exactly right. So there’s something about this, and I heard some Democrats say, ‘Well, you know, he’s too important. This is just chump change. He’s just too important.’ So change we can believe in — Yes, we can! — and hope! Timothy Geithner. Here, Jonathan Alter makes that very point last night on MSNBC. Question: ‘Is this another Zoe Baird situation where somebody is just going to go out the window, or do they seem to have been honest mistakes? Maybe, more importantly, is there sort of a bipartisan feeling this guy is just too valuable to even let ordinary rules apply to him?’

ALTER: It does seem to be an honest mistake. It would really be a shame if something like this sunk the nomination. We are in very serious times! They’re quite different than 1993 when Zoe Baird’s nomination was sunk for attorney general over this kind of nanny problem. Geithner is, by all accounts, the only person in Washington who fully understands TARP! (snorts) You know, $700 billion. We cannot afford at this point, unless there’s gross malfeasance, to take him out of the picture.

RUSH: This is the Drive-By sentiment summed up by Jonathan Alter. Geithner is a genius; he’s gonna save the economy of the entire world. So what if he doesn’t pay his taxes? These are serious times. We need the man! He is the only guy who understands TARP! So, Snerdley, and the rest of you, do not doubt me ever again when I tell you the degree to which the Drive-Bys are going to be in the tank for Obama.

RUSH: Here’s Andrea Mitchell with Mika Brzezinski today on Scarborough’s show on MSNBC. Mika Brzezinski says, ‘Tim Geithner, is this a big problem, some tax issue for the guy?’

RUSH: Now, wait a minute, wait a minute, I don’t want you people to misunderstand what we’re doing here. This is an exercise. This really isn’t about Geithner. We’re not talking about Geithner here. We’re talking about the media, the way the Drive-Bys are covering this. Smartest guy, the only one who understands TARP. So smart he does his own taxes. If he’s so smart doing his own taxes, how does he miss the back taxes and the taxes that he owes and the taxes that he’s not paying? And how does an accountant catch it, if he’s the smartest guy that we’ve got out there? Shouldn’t the accounting guy be running TARP? Have you people heard about how expensive Obama’s inauguration is going to be? Bush has essentially had to declare a state of emergency to get the funding to pay for this. It’s over a hundred million dollars. Bush’s was $40 million or so. The Drive-Bys, the AP back in 2004, ran story after story about how outrageously wasteful, unnecessary, and expensive the Bush inauguration was. Today there are stories on how magnificent the Obama inauguration will be and how the cost is irrelevant, due to the historical nature and the good vibes that will be extending to the country. I’ve got both excerpts. I will share them with you after the next break. Dingy Harry, by the way, held a press conference. Are you worried about this Geithner pick now, in light of the back taxes documentation? 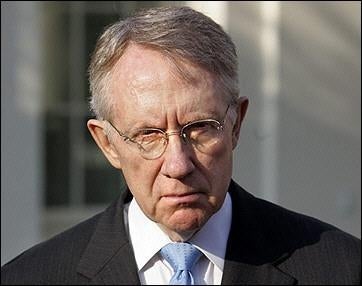 REID: Timothy Geithner is a person that is extremely well-qualified to be one of the finest secretaries of Treasury this country’s ever had. And there is a few little hiccups, but that’s basically what they are. I am not concerned at all.

RUSH: Okay, now, if I were Geithner, I would be a little worried about this. Dingy Harry’s track record on getting people through the process is not all that good. Dingy Harry stood in the way of Roland Burris. Dingy Harry said Roland Burris doesn’t have a prayer of getting in here; he can’t satisfy our rules; we’re not going to accept anybody appointed by Blagojevich. This week, Burris will be seated. Dingy Harry says no problem, little hiccup, Geithner will be in here. Now, if Dingy Harry’s track record holds true, ladies and gentlemen, Timothy Geithner could be in trouble.

RUSH: The New York Times is reporting that Timothy Geithner’s confirmation hearing, the new Treasury secretary, has been delayed until January 21st now, after the Republicans objected to holding his confirmation hearing on Friday. January 21st is the day after The Messiah is sworn in. Now, ladies and gentlemen, generally when Democrats run into ethics problems of any kind, the mantra then becomes it’s time for reform. Sort of like campaign finance reform was reform for all the corruption that was involving lobbyists and money and politicians. Of course campaign finance reform was designed to get the money out of politics to protect these innocent little birds that are elected, when in fact they’re the ones that are corrupt and are corrupting the system, it’s not the system corrupting them. So when somebody important to the Democrats gets tripped up legally, it usually spurs a call for reform. Look at Clinton getting funded by the ChiComs. The Clinton administration, ‘We need to reform this,’ because you pass the buck to the system for getting you in trouble, not you, and so the call went out, ‘We need campaign finance reform.’

So if the complexity of tax law tripped up the only guy who understands TARP, Timothy Geithner, isn’t tax reform called for? I mean it’s so common, it ensnares so many worthwhile public servants, it’s a mistake everybody makes, it’s such a common mistake. Isn’t it time to get rid of the mistake, which is the law, not the people? Don’t ask Charlie Rangel about this. This is one reform that is not going to happen, but normally that’s how the Democrats play the game.